SPEEDY VALLERYSTHAL DOES IT IN STYLE 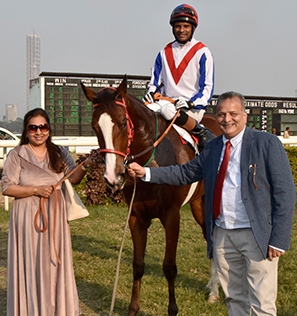 The New Year’s Day races at this centre has always been a glamour event that socialites of this city are keen to attend. The stands were well and truly bulging by the third race of the day.  With the current cold weather playing its part, this year’s mega event witnessed an attendance of over 22,000.  The 42 Indian Produce Stakes saw Vijay Singh-trained Vallerysthal (A. Sandesh up) make the 1200m sprint a pillar-to-post affair. Jaivant was a worthy runner-up who may prefer a longer trip. Avellino was an utter disappointment considering that in his previous essay he had finished ahead of Jaivant. It would seem that the stable fancied Trafalgar which had to be withdrawn due to unruly gate-manners. Nevertheless, that is not a worthy excuse for the poor run of his stablemate. The winner is sired by Multidimensional out of Romantique and may be considered the ante-post favourite for the Alokananda Stakes.

The race for the prestigious RCTC Gold Vase run over 2200m, went more or less according to the script and provided a suitable climax to the day’s proceedings as Bharath Singh-trained Midnight Phantom (Midnight Interlude-Golden Bright), with young apprentice P Vikram astride, made every post a winning one. Ophion ran on to be runner-up. It was payback time for Bharath as last year Ophion had pipped Bharath’s Serendine in the same event. Kudos to the apprentice for riding a calculated race and allowing his mount a breather before coming into the home straight. He maintained his calm when C. Alford atop Commodore drew alongside him at the top of the straight, and thereafter, a couple of reminders did the trick.

Earlier, Bharath Singh’s Jezzabelle(Burden Of Proof-Showing Off), with Md Islam astride, had stunned the field in the race for the T2 Cup. The rider seems to have an affinity for this filly. He won on her in her maiden start and partnered her in the second win of her career after a break of almost a year. Her win was long overdue. She was a tote favourite in the Select Handicap during last monsoon where she was knocked out of the race by Praise Her Gaze. Subsequently, in her first outing this winterin the lower division of the Kabuki Handicap (with Dashrath astride), she fly-jumped and lost all her chances. On this day, the speedster was shortening her strides in the final 50 metres of the six-furlong trip when tote favourite Viareggio was gaining ground and seemed as if she may overhaul her, But the winning post came to the rescue of Jezzabelle and Islam. The tote win dividend of Rs 1,289 was the highest so far this season.

The afternoon commenced quietly enough as Javed Khan-trained The Kiss (Multidimensional-Abronia) showed a wonderful turn of foot to get the better of Stallone and Coup De Grace. The filly excels over sharp sprints and gave owner Vikram Bachhawat the first of his two wins of the day – the other being Vallerysthal.

Shyam Habbu’s Singapore Sling (Excellent Art – Avec Plaisir) was the day’s first upset. Suraj Narredu made it a start-to-finish race for the Calibre Handicap run over 1400m. Arti Doctor trained Hovering ran a good race and may have turned the tables had she not drifted out under apprentice Bhati’s stick. Well-backed Speed Force (Mull Of Kintyre-My Pension) bagged the Steal The Glory Handicap by a street in the safe hands of  Imran Chisty. Lying a close fourth along the rails while Indus Prince cut the wind, Speed Force shot ahead in the straight to win as he liked from a faraway Airlift.

The handling of Bojangles by Dashrath in the Ardelis Handicap left much to be desired, considering the horse had never been tested over seven furlongs. Furthermore,  after the front-running colt took a runaway lead and ran out of gas near the distance post, the rider gave the poor fellow eight strokes of his whalebone quite unnecessarily. He was obviously doing his best till then and had run out of steam. If a tearaway lead was the best path to the winning post, then why not entrust him to a 3 or 4kg allowance apprentice. He would have fared better. In contrast, the handling of the Shafiq Khan-trained Cocoanut (Sussex Coco Beach) by Dhanu Singh Deora was absolutely brilliant. It was his superior handling that fetched him the race ahead of Summerhill.

Like Jezzabelle, the victory of Gimme Credit (Chevalier-Star Pride) in the Friends FM Cup was long overdue. With the competent P Sai Kumar in the saddle, the Robert Gowli-trained seven-year-old made it a start-to-finish affair. Ofcourse, the age on the first day of the year should not be a deterrent as all horses increase by a year in age on that day. The favourite Royal mews was gaining ground on him in the closing stages of the race but the game front-runner held on by the skin of his teeth.The curtain came down to a gala New Year’s Day show with Suraj Narredu and Southpaw (Bushranger-Quiet Appeal) saying adios on a happy note. The winner closed as the tote favourite and made every post a winning one.