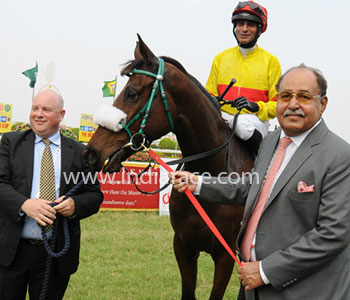 The Hyderabad Race Club (HRC) led by their Chairman Mr Surendra Reddy, can bask in satisfaction on the smooth conduct of the hectic Invitation Cup weekend presenting a wonderful experience to the racing fraternity. Although on the promotion front things could have been slightly better, as is seen for the Indian Derby at Mumbai, the Hyderabad Race Club played commendable hosts to the mega event. Under the astute leadership of Mr Surendra Reddy, the entire committee and team of officials presented an enjoyable experience for one and all. Well Done, HRC take a bow!

The stands were filled to capacity to witness the mega event, The Indian Turf Invitation Cup (Gr1) and the line-up was not short of glittering stars, both the equine kind and the saddle artists. The race itself was a bit out of the box as none of the initial leaders galloped in an assured manner and the lead changed several times in the first half of the race and none cracked a crisp pace. It is to Adjudicate’s credit that despite this she broke the record for the distance, clocking 2:27:02, the fastest ever anywhere in the country! It was a day of great delight for proud owners Mrs D Khaitan, Mr & Mrs A Khaitan, Mrs D Jalan, Mr Arun Nanda, Mrs Esha Nanda Bhojwani & Mr Amitabh Nanda.

Kangra hit the front at the start and led until the turn to the backstretch with Smasher moving up into second, Star Superior was third initially but slowed down to settle not too far behind, Psychic Force was thereabouts with Desert God and Adjudicate in the vicinity as the galloped into the back stretch. Soon Psychic Force took over but lasted just about a furlong or so before Salazaar burst into the lead.

Salazaar led them into the straight as the din of the crowd began to echo in the stands. Star Superior was picking up momentum and was prominent, but when Desert God slipped between horses, he easily measured up Star Superior and stormed ahead. Adjudicate, trained by James McKeown, arrived with a sizzling finishing run and dared the legend Desert God and even surged past. The old master was not done yet and offered stiff resistance; Desert God and David Allan giving it everything they had amidst high decibels threatening to blow the roof off. Adjudicate, however, produced enough torque power to smother Desert God’s game challenge, carving out a narrow victory with Desert God breathing down her neck. Star Superior saved the blushes hanging on to finish in the top three thwarting The Invader’s bid to outdo him. The Invader covered considerable ground in the straight and did well to figure in the frame in this elite set of horses.

For jockey YS Srinath, it was another moment of glory and his icy grip on the Invitation Cup surfaced yet again for the third time. For trainer James McKeown, this was his first Invitation Cup success and the bloke has excelled in the field and his master Padmanabhan would have savoured a proud moment although his student beat him at the game this once.

Adjudicate sired by Multidimensional out of Alvarita and bred at the Sohna Stud Farm, vindicated her connections and her supporters as everyone had gone gaga over her victory in the Calcutta Derby. She was not at her best level of fitness for the Indian Derby fighting a bout of fever and loss of weight, yet she ran a game race to take the runner-up berth in the Indian Derby and that was a subtle warning, rather sign, that she was a live threat for the Invitation Cup once she was fully fit. 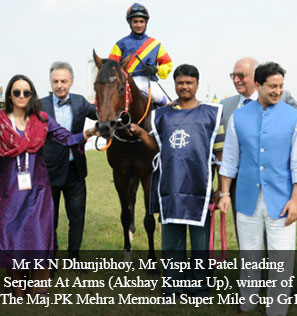 The other big race among the dazzling card for the day was the Major PK Mehra Memorial Super Mile Cup (Gr1) and Serjeant At Arms was raring to go, keen to set the record right and prove his dominance over the mile. He literally blew the field away and there were some high quality runners in the field of 12. Serjeant At Arms looked the winner the moment they settled down and he chose to take the fourth spot early in the race. Isn’t She Lovely started aggressively as she shot into the lead at break-neck speed. Rikki Tikki Tavi and Pablito raced close behind with Serjeant at Arms travelling on tight reins in the hands of local champion Akshay Kumar. The rest were chasing the front-runner in a closely huddled bunch.

Isn’t She Lovely led them into the homestretch and even as Rikki Tikki Tavi could measure up to the leader, Serjeant At Arms unleashed his famous turn of foot and in a matter of spilt seconds had bounded away from them all. Serjeant At Arms was at his dominating best and showed that he sure is far too superior and in a different league altogether.  He romped home in style in keeping with his superstar status and cruised to a devastating win beating a good bunch of horses with amazing ease and all those who saw his prowess, including the bookmakers who had to perhaps shell out a lot on his win, couldn’t have stopped themselves into turning to be his admirer!

Mauritania (Excellent Art – Classic Sky, Poonawalla Stud) had done well the previous day finishing behind Ruffina in the Sprinters’ Cup (Gr1) and came into his own with a determined gallop to pocket the Suresh Mahindra Multi Million Trophy (Gr2) profiting from a superlative ride that jockey David Allan provided.

Favourite Costa Brava led the field right from the start with Mauritania moving up to one behind the leader, Tutankhamun settled in the third position and the rest in a close-knit huddle on the heels of the front bunch.

David Allan got to work on Mauritania even before the turn and did not let Costa Brava slip away. Once in the straight, Mauritania drew level with Costa Brava and David knew that he had a big fight on his hands. Costa Brava was putting in stiff resistance while Tutankhamun was stuck behind this pair as Master of Universe also closed his manoeuvring room. Mauritania meanwhile, wore down Costa Brava in the final fifty and sustained well to carve victory by a narrow margin. Costa Brava staved off the late challenger Cavallo Veloce who made a good effort in the final stages of the race, but his burst of speed was too short and too late as well. Master of Universe did well to finish in the frame, but Tutankhamun would have returned with a grumpy face as he did not have the luck of the race.

Local Runner Wave Rider (Top Class – Mizzna) saddled by RH Sequeira,  pulled off a much needed win in the Villoo C Poonawalla Million holding on bravely to counter the challenge of favourite Mystic Flame in a prolonged battle. Seven Eleven led them into the straight and Wave Rider, who was chasing the leader from the start, soon got past and took charge. Wave Rider built a handy lead before Mystic Flame arrived with a game challenge. The pair fought out the final furlong and jockey A Sandesh rode out astutely to keep Mystic Flame at bay. Seven Eleven finished on to save the place money ahead of That’s My Magic. Sakura disappointed and never looked in contention.

Mumbai based trainer Altaf Hussain trained Divine Glory (Arazan – Forever Glory) had it easy this time and chose the big day to pick up her maiden victory. She settled down nicely in third as Top Saga hit the front with Forever Yours in second. Divine Glory, with Sandesh in the saddle, began to chase down Yours Forever who was galloping hard to stay in the lead. Divine Glory picked up speed approaching the distance post and produced a cracking gallop to sail ahead and win easing up. Divine Glory won the Vijay Textiles Juvenile Million in style with Yours Forever finishing two-and-half lengths behind. Eastern Crown edged out Tapatio for the place money.

The Japan Trophy was a scintillating finish with D Netto’s ward Escobar (Lord Admiral – Flirting Fantasy) timing his run perfectly to nail Withrosemakeup on the wire. Platinum Claasz shaped well in the homestretch, but Withrosemakeup arrived with a good burst of speed and surged past her. Just when it looked like the mare would make it all the way, Escobar with jockey Kiran naidu astride, arrived with a sizzling finish to pip Withrosemakeup on the post. Platinum Claasz and Big Flash finished on the haunches of the top two.

L D’Silva trained Meka’s (Green Coast – Tiana) produced a terrific finish that dashed favourite Aeolus prematurely in the homestretch. Barnabas squandered away a good lead and gave in meekly to Aeolus early in the straight. However, even before Aeolus could set sights on the winning post, Meka’s partnered by jockey BR Kumar, rocketed from the outside and simply breezed past the favourite and widen the margin with every stride. This was perhaps Meka’s personal best effort performance as she notched up her third career win and looked good doing so. Egyptian Prince had to put in hard work to take the runner up spot well behind the winner.  Dunkirk piled up more misery on the favourite while taking the third place.

Trainer Loknath’s Striking Grey (Pinson Timeless Memories) added glitter to the delightful weekend and marked the conclusion with a fitting finale a run that was as dazzling as it can get. While the big equine celebrities hogged the limelight, Striking Grey left a striking memory in with his finishing brilliance to earn applause from all and sundry. Striking Grey was closer to the rear bunch when they turned for home. Humaaghar was in the lead and was marching on with a couple of challengers preying on him. Striking Grey burst on to the scene with jockey Darshan astride; he ran a bit erratic, but at a cracking pace to swoop upon the front-running bunch and draw away, continuing on his wayward course. He won by a good margin, which seemed unlikely if not impossible 20 seconds earlier and stunned the field passing every horse along the way leaving them stranded. On My Way and Vijay’s Empire who followed the grey home seemed trotting compared to Striking Grey’s tremendous run.

Jockey A Sandesh was the lone pro to score a double on the day.