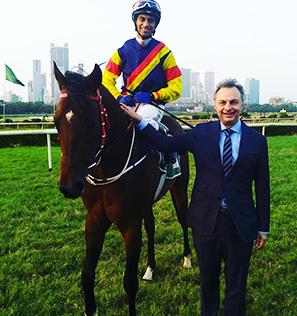 Champion miler Serjeant At Arms (Ikhtyar – Rahy’s Serenade, Nanoli Stud) dropped no sweat while taking on lesser mortals to win the Maharaja Sir Harisinghji Trophy (Gr2), the feature event of Sunday’s races at Mumbai. The SS Attaollahi trained horse paced comfortably right from the start, settling where he liked and then unleashed a run that was just about enough to do what was required to clinch his 14th career victory from 17 starts, without having to fire away in the homestretch.

B Fifty Two led them into the straight and soon Caprisca got past him tried to make an early break-away. However, Serjeant At Arms was on cruise mode with jockey Trevor piloting him on tight reins. The inevitable happened a few strides later as Serjeant At Arms flashed past Caprisca and sailed away to win without Trevor having to do much from the saddle. Serjeant At Arms won comfortably and it was a treat to watch him gallop away majestically to flaunt his Superstar status.  Caprisca should be happy taking the runner up berth behind one of the best in the business.

Sandesh had another shinning day as he had ridden two other winner earlier in the day. He started off on a winning note partnering Sunderji’s Fanfare (China Visit – Veena’s Star, Usha Stud) in the opening event of the evening. Retained Asset had a big led coming into the homestretch but failed to retain his lead. Fanfare moved up nicely and got stronger midway into the straight to get past Retained Asset without encountering any challenge. Benevolence, who was racing in the rear all the way into the straight, made progress under the whip, but never looked like catching up with Fanfare. Sandesh ensured that Fanfare had a fair advantage all the way and guide the filly to her third win all three victories coming this season. Benevolence ended two lengths behind the winner.

The Sunderji-Sandesh combination struck again in the next race with Galloping Goldmine (Arazan – Messalina, Poonawalla Stud). The even-money favourite surged ahead soon on turning for home and stretch out nicely to hold the sway all the way to the wire. Debutante Wizard of Stocks tried hard to topple the winner, but his inexperience may have been the reason to finish second best. Galloping Goldmine improved upon his previous performance and justified the strong support he received in the betting ring. He managed to ward off the late challenge and register his maiden victory. Istanbul did well to save place money.

Trainer Sunderji was not done yet and his ward Tenerife (Chine Visit – Cest Bon, Usha Stud) compiled a fluent victory without encountering any threat. Apprentice jockey AS Peter took him to the front and once they turned for home Tenerife accelerated smoothly to steer clear of her rivals. She won by just under three lengths from Super Mario and Ustad Pedro.

Veteran trainer SS Shah saddled She’s A Spy (Phoenix Tower – Autocop, Manjri Stud) notched up her maiden win on her tenth essay. She had to battle it hard though as Democrat was proving to be a tough nut to crack after leading them all the way into the straight. She’s A Spy moved up along the inner rails, while Golden Horde made a big move on the outside.

In the final furlong, Democrat was still slightly ahead of Golden Horde when She’s A Spy burst through between the two in front. Trevor rode out the filly determinedly and zipped ahead meters from the winning post to finally bring about a first success for She’s A Spy. Golden Horde yet again found one better for the fifth time in his career. Cracklin Rosie arrived with a fast gallop, but only when all was over. All she could do was pip Democrat for the third slot.

For the professionals, trainer SK Sunderji  and jockey A Sandesh scored a treble each, while jockey Trevor scored a double.