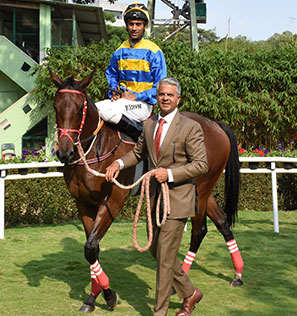 After losing out big on the opening day, punters recouped their losses on Sunday, six public choices nailing bold colours to the mast in the seven-event card. The Inayathullah-trained Mega Ikon was the only lesser fancied winner, romping home in the opening event, the Esquire Plate after Commodus and the favourite Sea Of Cortez were withdrawn before the start of the race..The Neil Darashah-trained Sea Of Cortez, it must be mentioned was withdrawn on controversial grounds. It is learnt that after a couple of members complained to the officials of the club that the Neil Darashah ward was lame and that the connections of the horse were keen to race the debutant choosing to ignore the lameness, the decision makers of the club decided to check Sea Of Cortez out in the stables and informed the trainer that they need to check the horse thoroughly following the complaints received by the stewards. After the inspection, the vets of the club decided to scratch the horse contending that the horse was found lame and hence will not be permitted to run.

Neil Darashah it is clear was not satisfied with the conduct of the procedure. Nevertheless the findings of the inspection and report disclosed that the youngster was lame. A official of the club also revealed that the chief vet, who had decided to withdraw the animal was firm and stuck to his report that the horse was lame. It is also learnt that the stewards of the club were not willing to take chances following a couple of informers informing the club that one of the owners of the horse S Dheeraj Kumar has definite links with leading bookmakers in the South. Well then Sea Of Cortez was withdrawn and Mega Ikon in the hands of Vivek comfortably won the event from Knight Templar and the public choice Jersey Legend who produced a below par effort.

Coming back to the decision to withdraw Sea Of Cortez on the ground that she was lame is right, but  bringing in the owner with bookies connection angle is wrong taking into account that it is the decision makers of the club who found Dheeraj Kumar good enough to own horses at this centre. After clearing an individual for ownership and later doubting his credentials in situations like this is not done and BTC will need to answer a few questions before they are provided a clean chit.

Trainer Imtiaz Khan who brought of a successful gamble on Ice Speed on the opening day pulled out another rabbit from the bag, the strongly fancied High Admiral from his yard donkey-licking his 11 rivals in the Udhagamandalam Plate run over a sprint. The connections of High Admiral were so confident that the six-year-old mare would score, many in the group declaring that High Admiral would canter home. The winner looked a picture of fitness at the parade ring and he did cruise home without raising a sweat. The topweighted Island Pearl gained the runner-up berth ahead of Glorious Days while Galino flashed home fourth suggesting that he is capable of earning his winning bracket soon this season.

Snowdon opened the favourite in the Dr. T Thimmaiah Memorial Trophy before the supporters of Into The Groove and Blue Moon went bang-bang in the betting ring. The two ended up joint favourites before the dozen runners came under the starter's flag while Snow Don who was now offered at (4/1) had no takers. In a pulse-pounding finish, Blue Moon piloted by T S Jodha gained the day to the delight of the Rai brothers, M R and Chandrashekar Rai. "The rub of the green was not favouring us in winter and hopefully after this close win lady luck will continue to smile on us all summer," said Chandrashekar Rai.

In line for a hat-trick, the Sulaiman Attaollah schooled Anjeze was clearly the best performed youngster in the Sir Cecil Youngsters Million and she proved it right making every post a winning one in the hands of leading pro Trevor Patel. On the strength of this performance the winner a frontline contender for Fillies Championship Stakes will be hard to down in the first classic. The Mumbai challenger Thailand who has joined Arjun Manglorkar's yard finished second ahead of Cape Kidnappers who looked good after her campaign in Ooty while another Mumbai hopeful Gallantry after promising much failed to deliver.

After proudly leading in Blue Moon, Neil recorded a double through Alpha who was one other to justify favouritism, making it a pillar to post affair in the Poonawala Stud Plate. Trevor who guided home Anjeze again had it easy on Alpha. Armin from Arjun Manglorkar's yard garnered good support, backed down from (7/1) to (4/1) but the grey found the sprint trip too sharp and eventually finished fourth.

Arabia on paper looked the best. In fact the well performed Pesi Shroff ward was touted as one safe bet in the Sunday card. The even-money offered on Arabia, many old hats in the game opined was money for jam and punters on a winning streak cashed in big making double investments on the Pesi ward to return home with three sacks full. Brainstorm who was under the care of Pesi Shroff in the Mumbai season has joined Arjun and he too did well to gain the runner-up berth in the Managing Committee Gold Cup run over a distance of seven furlongs.

The final event, the Lady Gibraltar Plate was an open affair with Mahanati from Azhar Ali's yard gaining an edge solely due to the fact that the Hyderabad ace Akshay Kumar was guiding her fortunes and Akshay made no mistake driving Mahanati home to the delight of the followers of form.