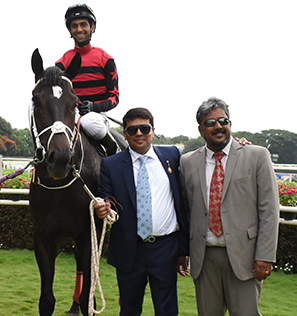 The two best colts at the campus, War Hammer and Impavid made the Kunigal Stud farm proud. The progenies of Air Support provided a shot in-the-arm for the resident stallion who in the Indian breeding circles was almost written off taking into account that his first crop had failed to make an impression on the classic scene. With the emergence of War Hammer and Impavid the stock of Air Support is certain to get a boost in the years ahead.

War Hammer enjoys the rating as the best three-year-old at this centre won the Karnataka Juvenile Million, a lead up to the classics for the summer season in taking style on Sunday. The Prasanna Kumar trained War Hammer was ridden in copybook style by jockey Trevor Patel to beat the challenge of a host of horses who finished in a cluster behind fighting for minor berths.

The punters put faith in War Hammer to record his third straight win and they were right in doing so. War Hammer had shown a tremendous turn of foot and the jockey could sit easy with him in the rear. Trevor did the same as War Hammer came from almost the last position at the final turn and stormed past the front-runners to record an easy win. War Hammer will surely start as a firm favourite for the second classic of the season, the Colts Championship Stakes. Missing You who was expected to put up a fight gave up without a fight when confronted with a strong challenge from the eventual winner. Mystic Bay was second ahead of Kolkata’s Trafalgar who impressed most when finishing third.

Arjun Mangalorkar trained Impavid was another youngster to impress by winning the Brig R C R Hill Memorial Trophy over a mile in a good timing of one minute 37.26 seconds. Sandesh had no problem in beating the challenge of New Moon who tried to win leading in front from the start. Though Impavid took time to overhaul the front-runner, he got stronger at the finish and the timing clocked should mark him out as a strong challenger for War Hammer. Exclusive Blue who was in a bad position, covered good ground in the straight to take the third position.

Champion trainer from Mumbai, Pesi Shroff trained Wizard of Stocks won the Glorious Colours Plate over a mile. The favourite showed lot of speed in the straight to leave the field stranded inside the distance post to record an impressive win. Needless to say, that Wizard of Stocks should emerge as a top horse. The trainer is of the opinion that Wizard of Stocks has a lot of promise. The winner recorded a good timing for the mile-long trip. Francis Beacon was easily beaten by Wizard of Stocks in the final furlong.

The supporters of jockey S John were happy that the jockey who was back after a long holiday finally broke the ice by guiding favourite Stand Out to pull off a narrow win over San Bernardino whose charge just about failed to yield the desired result. Stand Out held on to justify the favourite much to the delight of the supporters of the favourite.

Punters who enjoyed the favourites nailing bold colours to the mast were in for a shock in the last two races of the day. Slovenia was touted as a moral certainty, but the favourite flopped like a dud when the well-backed Harmonia came up with a big challenge. Harmonia was with a great deal of ease. Ashoka The Chakra even beat Slovenia to take the second position.

Sulaiman Attaollahi trained Apollo Bay was also another favourite to dent the punters. Apollo Bay disappointed the followers of form being under pressure before the final turn to eventually finish in the ruck. Winx managed to get the better of String of Pearls who was shaping to bring off a big upset.

Earlier in the day, K P G Appu schooled Zafrina was a long-priced winner of the day. Zafrina won in the hands of jockey Amyn Merchant much to the chagrin of punters who thought that Arrogance would surely oblige. It was Queen Isabella who put up a fight while Arrogance was a tame third.