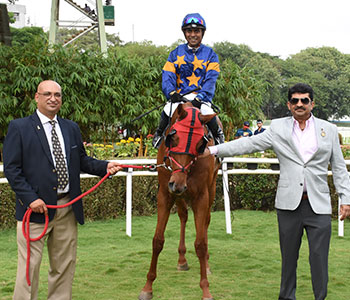 After a couple of disappointing efforts, the Arjun Manglorkar-trained Courage finally produced a gusty performance to stand tall at the podium winning the Civil Service Cup in a close finish from rankoutsider Aeisir and the favourite Saint Petersburg. The top fancy Saint Petersburg hit the front and called the shots for most part of the sprint trip before Suraj powerfully drove the Arjun ward to snatch the lead close him and return home a deserving winner. Aesir caught the eye finishing second ahead of Saint Petersburg who lacked the gas in the final furlong, while the speedy Bora Bora came home fourth.

The concluding event, the upper division of the Royal Challenge Plate produced a thriller. The two top favourites Aeolus from Darius Byramji's yard and Ambrosio from the stables of Sulaiman Attaollahi flashing past the post locked together. The `magic eye' nodded in favour of the Darius ward piloted by Zervan, who had seized the initiative past the distance post and gallantly held on to peg back the belated effort of Ambrosio, who it was clear warmed up far too late. On the expected line, Akita Pro came home third.

The Prasanna Kumar-trained Prodigal, who had dislodged John in his last essay was the public rage in the Meydan Plate run over a sprint. But all that the overwhelming public choice could do was finish a tame second behind the second in demand at the betting ring, Stari Grad from Mohd Khan's yard piloted by Prashanth Dhebe. The winner who had finished second behind Mahanati went one better moving up swiftly in the straight to lower the colours of the on-money favourite Prodigal. Adventurer who too had his fair share of supporters managed to only save money in place.

Earlier, the on-money favourite Orenda from trainer Arvind Ganapathy's yard edged out Supernormal by the shortest of margins to the relief of all the big bettors, who had made big investments on the Arvind ward piloted by Sandesh in the lower division of the Royal Challenge Plate run over a distance of seven furlongs. The topweighted Charmed Life finished ahead of Pink Smile.

The Prasanna Kumar schooled Commodus made a winning debut in the Prince Khartoum Trophy run over a sprint. After the top fancy Constanza hit the front from the word go and held the advantage till the final furlong, Trevor Patel astride Commodus setalight the winner who stormed up to breeze past the leader in the final furlong. On The Trot nosed out Donna Bella from Irfan Ghatala's yard who too was strongly fancied by the insiders and the right connections.

The Prithviraj schooled Incitatus on the strength of his satisfactory showing in his last effort was fancied most in the Star Supreme Plate run over a distance of seven furlongs. The Prithviraj ward confidently piloted by leading pro Suraj Narredu to the delight of his supporters produced a sparkling gallop in the final furlong to romp home in emphatic fashion. Last start winner Amazing Angel was seen finishing on well to gain the runner-up berth ahead of Ultimate Power while Agnar made the frame.