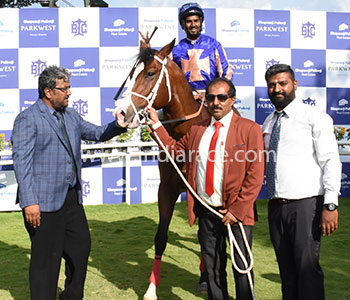 You got to doff your hat for trainer Prasanna Kumar. The youngster who is consistently leading in winners, struck again through Knotty Ash who in splendid style made every post a winning one in the Shapoorji Pallonji Million. The winner who had chalked up a fine win in his earlier start this season again produced a heartwarming performance to confirm that he is one of the best sprinters. Antony Raj who had ealier struck on Track Striker confidently piloted the winner who looked in great heart and detonated a classy dozen horse field including the two top fancied Mauritania and Tutankhamun. The former finished second ahead of Accolade while Tutankhamun finished fourth. Knotty Ash in is rousing form and is set to complete a hat-trick of wins when saddled next.

The favourite Kirkwood from Arjun Manglorkar's yard who was strongly fancied to score in the Moonlight Romance Plate justified the confidence reposed in her powering through in the final furlong to score from Northern Alliance and Roman Senator. Top gun Suraj Narredu produced a copybook race on the winner who looked a picture of fitness at the parade ring.

Earlier in the opening event, lesser fancied Track Striker from M R Singh's yard upset the applecart of the favourite Ekalavya much to the chagrin of the followers of form. The winner in the hands of the talented apprentice Antony Raj stole a march at the distance post and then gallantly pegged back the belated effort of Ekalavya at the wire. Galino finished a suggestive third while Smile Of Joy who was gracing the wrong end of the field for most part of the nine furlongs trip moved up to take the fourth spot.

The Arjun Manglorkar schooled Chula Vista piloted by S John and the Dominic-trained Songkran garnered the maximum support in the June Plate run over a sprint. But the `Jodi' went out of the window, six to one shot Darahasini edging out Chula Vista in a close finish. Leading pro Pradeep Chouhan who was guiding the fortunes of Songkran lodged an objection against the rider of the winner Surya for coming in sharply and taking his ground and against the third placed All By Myself for squeezing him in the final furlong. The stewards decided to uphold Chouhan's objection against All By Myself and overruled the protest against the winner.

The Flirting Vision Plate run over a mile saw King Creole from Padmanabhan's stable and Natalma from trainer Darius Byramji's yard top the betting board. But this time the `Jodi' backers heaved a sigh of relief as Zervan drove Natalma home ahead of the two rankoutsiders Another Rainbow and Proud Prince. The favourite King Creole burst his blood vessels during the race and as a result was seen struggling to keep pace even before the field negotiated the final curve and eventually finished in the ruck.

Spurred by the success on Natalma, Zervan in the next event, the Y S Surender Memorial Trophy booted home the six to one shot Set To Win, another from Darius Byramji's yard to an emphatic win to the delight of the Byramji camp. Good Time Indeed from Pradeep's yard piloted by Trevor Patel after Chouhan opted out on medical grounds gained the runner-up berth ahead of Piper Regina. The favourite Striking Grey raced in patches and failed to even save money in place.

In line for a hat-trick in the concluding event, the Fire Haven Plate, Zervan astride the long shot Renegade from trainer Dominic's yard, made it a start to finish affair snuffing out  the challenge of the heavily backed Marco Polo and the second in demand at the betting ring Star Cavalry in convincing style.