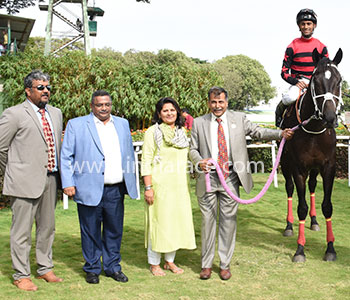 The two best sons of Air Support from the Kunigal Stud Farm, War Hammer from trainer Prasanna Kumar's yard and Impavid from the stables of Arjun Manglorkar were fancied to dominate the finish of the second classic of the season, the Colts Championship Stakes run over a mile. And the two who had remained unbeaten from their three starts did just that. The overwhelming favourite War Hammer strongly piloted by top gun Trevor Patel gained the day after an intense struggle for supremacy in the final furlong to the delight of the Kunigal camp. The winner while chalking out his fourth straight win and maiden classic success sent out a strong message that he will relish extended trip and that effectively puts him on the top of the list for the blue riband of the season, the Ultra Kingfisher Derby next month.

Impavid, it must be mentioned, in defeat was not disgraced and lives to fight another day. War Hammer apart, the one which impressed most on the classic day was the promising `girl' from trainer Parvati Byramji's yard, Gift Of Grace, who made a smashing debut in the Red Divine Plate run over a sprint. The daughter of Speaking Of Which out of Appeasing, who looked a picture of fitness at the parade ring tracked the front runners led by Constanza for most part of the trip before unleashing a tremendous turn of foot in the straight to outclass her seven rivals, romping home in a very good time of 1: 11.91 seconds. The winner on the strength of her magnificent debut is certain to make her presence felt against higher rated horses in the months head. Constanza after doing all the early running had to rest content with the runner-up berth ahead of Stroke Of Genius while Donna Bella filled the frame.

The Padmanabhan-trained Crack Of Dawn and last start winner Kirkwood piloted by S John were fancied most in the opening event, the Adler Stakes run over a mile. The second in demand at the betting ring Kirkwood came out tops snuffing out the challenge of Crack Of Dawn and Ido What I Do, who after establishing a winning lead at the top of the straight failed to kick home and eventually finished third.

The Neil Devaney schooled Himachali was backed to the exclusion of her dozen rivals in the Guindy Plate run over a sprint. But the favourite who was struggling to get a favourable position all through the sprint trip met with rough passage, Master Of War piloted by Chouhan interfering with her progress and this helped the front running Simply Magical to hold onto the advantage and gain the day from the public rage. Regal Force who tracked the winner all through the sprint journey finished third ahead of Duty Call.

Like in the opening event, Corona Del Corsa from leading trainer Prasanna Kumar's yard and Akita Pro from the stables of Irfan Ghatala gained the top billing in the Justice P Medappa Memorial Trophy run over a distance of seven furlongs. The former in the hands of Suraj  Narredu made every post a winning one to register his second straight success this season. Land Of Liberty surprised most finishing second ahead of Akita Pro while Star Cavalry from Ganapathy's yard appears to be on the slide after priomising much in winter.

In a (5/1) field, War Hero from trainer Neil Darashah's yard neatly piloted by promising apprentice jockey Manish reigned supreme in the upper division of the Classical Act Plate run over a sprint. After Baymax became lame and violently shifted out at the top of the straight, Kvasir, one of the fancied contestants hit the front and held a narrow advantage before War Hero stormed up to assume command and put the issue beyond doubt in the final furlong. Wings Of Desire after gracing the wrong end of the field for most part of the trip produced a good gallop to run home second ahead of Kvasir who edged out Constantinople to save money in place.

The Padmanabhan schooled Isn't She Lovely on the strength of her impressive last start victory was the public rage in the Racing Patrons Trophy, but the hot public choice after streaking ahead at the top of the straight flopped badly and eventually finished a dismal fourth. The lesser fancied Automatic from Irfan Ghatala's yard surprised most producing a winning gallop at the all-important end to score from the Mumbai challenger Auburn while the topweighted Kambaku took the third spot.

The concluding event, the lower division of the Classical Plate was claimed by the favourite Star Man from trainer Nityanand's yard. The favourite partnered in copybook style by Trevor Patel got up in time to peg back the challenge of Birchwood close home. Bold Move finished third ahead of Amber Crown who raced in patches.