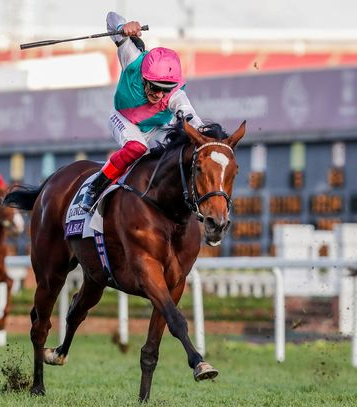 A star-studded field will gather at Ascot later this month to battle it out for glory in the King George VI and Queen Elizabeth Stakes. Champion mare Enable has been installed as the odds-on favourite to triumph in Britain’s most prestigious open-age flat race after dazzling in the Coral Eclipse Stakes, Gr.1 last weekend. However, this race promises to be ferociously competitive and she will have to be at her best if she is to see off the threat of Crystal Ocean and Anthony Van Dyck. The prize purse stands at £1.2 million (R103 million) and the prestige associated with winning this Group 1 contest is enormous, so it is sure to be a thrilling affair.

The top online betting sites have made Enable the clear favourite after her triumphant return to action on July 6. She established herself as the dominant middle-distance runner in Europe when she won this race in 2016, along with the Prix de l’Arc de Triomphe, Cheshire Oaks, Epsom Oaks, Irish Oaks and Yorkshire Oaks. She did not return to Ascot defend her crown last season, but she enjoyed another phenomenal year, becoming the first horse to ever win the Breeders’ Cup Turf and the Prix de l’Arc de Triomphe in the same year.

She made her seasonal return at Sandown and secured a 10th straight victory under legendary Italian jockey Frankie Dettori. She went off as the 4 to 6 favourite and totally justified that price by finishing three-quarters of a length clear of Magical, with Regal Reality in third. She will bid for a third consecutive Prix de l’Arc de Triomphe in October, but first up Enable will make a full assault on the King George VI and Queen Elizabeth Stakes, which is set for Saturday, July 27th, at 3.40pm local time (8.10pm in India).

Dettori called her “the queen of racing” after she won the Eclipse said she is his favourite ride. Trainer John Gosden added: “She was only about 85% or 90%. To come from an eight-month lay-off and win an Eclipse is quite an ask. She is an exceptional athlete.” Her victory was more comfortable than it sounds, and any concerns about her fitness should be swept aside by that performance.

Yet Crystal Ocean, who finished runner-up to Poet’s Word in this race last year, looks set to provide stern competition. In winning the Price of Wales’s Stakes at Royal Ascot last month, Sir Evelyn Rothschild's five-year-old son of Sea The Stars earn a Longines rating of 127. That puts him at the top of the latest Longines World's Best Racehorse rankings, ahead of retired wondermare Winx, Beauty Generation of Hong Kong and American superstar City Of Light, who are all of 125. Enable is joint seventh at 123.

That puts Crystal Ocean 4lbs ahead of Enable, although she will benefit from a 3lbs sex allowance. But it suggests she will need to improve upon her showing at the Coral Eclipse if she is to finish ahead of Crystal Ocean, who is in fine form. Champion trainer Aidan O’Brien has enjoyed another dominant year, and his big hope for this race is third favourite Anthony Van Dyck. The promising three-year-old surged to victory in the Derby at Epsom on June 1 and followed it up with a second place finish at the Irish Derby four weeks later. He could make things interesting, while the likes of Japan, Defoe, Magical and Waldgeist will be in the mix. But ultimately it could come down to a thrilling duel between Enable and Crystal Ocean, and Enable has shown that she has the class to win that battle.