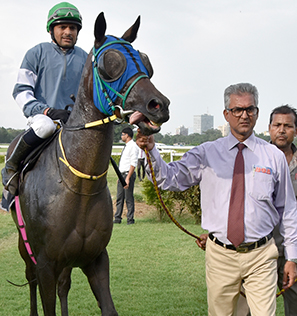 Trainer Bharath Singh’s 5/1 shot  Kantai (Ravel – Minnie Mouse) was given a splendid ride by the vastly experienced Dashrath Singh to hoist the winning flag in the race for The Great Tribute Cup. The 12/10 favourite Jaivant appeared to have the race in his sight when Dashrath resorted to his whalebone and a couple of cracks did the trick. It was Dangal and Devotion who set the early pace, followed by Jaivant in a box seat while Kantai was a close fifth of six runners for most part of the race. Dashrath made his move the moment he saw Jaivant making a beeline for the winning post. Dashrath’s finishing punch made the difference. Fantasia finished on to be a fair third and is one for the notebook.

Trainer Vijay Singh and his trusted knight Nikhil Naidu combined to fetch home a double with three-year-old filly Valeria and four-year-old gelding Diamond Harbour. After a disappointing winter season when she had to be withdrawn a couple of times for unruly gate manners, Valeria (Win Legend-Integral) was well prepared by his mentor on this occasion. She was fastest out of the gates and led all the way. She continued to increase the margin of victory in the straight and win as she liked. Atom was a faraway second. Naidu had a difficult ride atop Diamond Harbour (Lord Admiral-Zvonareva). He had to squeeze through between front-running Iconia and Millenium Glory before pulling out all stops to get the better of the latter at the wire by the narrowest of margins. Fast-finishing Artificial ended up a close third.

The day commenced well for followers of money as trainer Aashay Doctor’s on-money public choice Murakami (Declaration of War-Fame Star) won the Supernova Handicap in commanding manner from stablemate Seventh Step. It was the bottom-weight Yuvan who made a start-to-finish essay for the mile trip but fizzled out once challenged by Murakami and DS Deora. Champion of many a past season, Christopher Alford has yet to open his account after five days of racing. He ended up as runner-up on both Seventh Step and Atom.

After a forward run in the upper class where she finished fourth, speedy Moira (Oath-Tampico) was installed as the 2/1 favourite for the Contralto Handicap – a No Whip race. Leading apprentice Rupal Singh wasted no time in taking the five-year-old mare to the front as the gates opened and she managed to stay there all the way after staving off a strong challenge from Shanayaa’s Pet.

Rupal Singh completed a double in the last race of the day. Despite a 5.5kg penalty, Javed Khan-trained Malana (Western Aristocrat-Understood) made every post of the seven-furlong race for the Mandolin Handicap a winning one. Public fancy Advika closed at 18/10 and finished dead last. Stablemate Aashna was a poor fifth while six-year-old Tweedle Dee proved invaluable for those who wager place-bets. Possibly the most impressive runner in this race other than the winner was top-weight Shivesh. He is definitely one for the notebook.