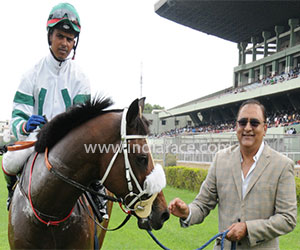 Moondancer (Rohit Kumar Up), winner of The Air Command Cup

Apprentice jockey Rohit Kumar was the shining star of the day piling up three winning rides including a back-to-back double. This performance should boost the lad’s confidence and he sure is the jockey to watch during the season.

He partnered the lesser fancied Moondancer (Excellent Art – Pleasure Hunt) in the day’s feature event and won as he liked while clinching the Air Command Cup by a widening margin. Apprentice Rohit Kumar guided Moondancer to the front soon at start and didn’t hold him back as he sped away to establish a longish lead early in the race. Exclusivenorthwind, the hot favourite, stuck along the rails in third, just a shade behind Chase Your Dreams and had Exclusive Wind and That’s My Class on his haunches until the turn.

Trainer Satyanarayana ‘s ward Moondancer never looked like he was away from the race track and was returning after a ten-month break! He displayed smooth action and awesome speed once in the final furlong and snuffed out any challenge even before any possible threat could have started brewing. He strode out majestically as he had done in his early days and added a long pending win to take his tally to seven wins from 13 starts. That’s My Class picked up in the straight to take the runner up spot. Exclusivenorthwind, it is learnt bled during the race, as such this run is best ignored.

Moondancer was the third win for the day for Rohit Kumar. He had started the day on a good note by providing a memorable first win for trainer S Sreekant astride Brave Warrior (Chinese Whisper – Da Vinci Rose) in the first race of the day.

Limousine led the field with Turf Emperor in second, Brave Warrior moved up to be third just ahead of NRI Flame as they approached the final turn.  Trainer Sreekant had tuned in his ward perfectly as he came with a big charge soon on turning for home. The dark bay gelding stormed into the lead and in split-seconds had drawn away from the hitherto front-runners. He strode out majestically, looking the winner a long way from home – a sure sign for another win to come.  Turf Emperor did well to kick on gamely and staying well-ahead of the rest to finish second. NRI Flame huffed and puffed and barely managed to keep the third place from Mossad.

Rohit Kumar next struck with trainer Satyanarayan’s ward Shivalik Valley (Saamidd – Sashimi) helping the filly to achieve her maiden success. This one did not come easy as Rohit had to ride out all the way to the wire. Although he had judiciously drawn level with the front running Moskova, Rohit had to sustain the momentum as hot favourite Linewiler was just beginning to light up. Rohit Kumar relied on going hands and heels even Linewiler was moving up aggressively and catching up at a quick rate. He left the use the whip until the last couple of strides and that did the trick as he managed to win the humdinger by the skin of his teeth. Shivalik Valley showed tremendous resolve and fought bravely all the way and held on to win by the narrowest of margins. Linewiler did everything right and was unlucky to miss out so narrowly. Moskova did well to finish in the money.

Laxman’s Singh’s My Journey (Tazahum – Berry Girl) picked up his maiden victory with surprising ease while making his debut, in the hands of jockey Ashhad Asbar.
Chasing Stepper all the way into the straight, My Journey made the forward surge past the 400 and then quickened nicely to sail away. Premier Action was warming up but even before he could think of a worthy challenge, My Journey was well ahead and bouncing ever further away from the field. Asbar was going only hands and heels and My Journey responded so well that he had the luxury of easing up the filly well before the winning post. My Journey won by over four lengths. Premier Action found the winner too good, but beat the rest comprehensively. Explosive edged out Stepper for the place stakes.

Laxman Singh struck again in the very next race with Cincia Azzurra (Kingda Ka – Ashtoh) who he entrusted to jockey Akshay Kumar.  The Champion rider did complete justice and waited with Cincia Azzurra until into the straight before unleashing the filly who responded with a powerful finishing gallop.

Et Voici led until into the straight and fell back. Gusty Look had barely taken over when a dual challenge erupted with Cincia Azzurra and Soul Empress making their move at more or less the same juncture. Cincia Azzurra was sandwiched between the other two, but with Akshay propelling the filly, Cincia Azzurra picked up speed to surge ahead and then gallop away to score her second career win with a measure of comfort. Gutsy Look, Soul Empress and Buttonwood finished on in close order.

Meka’s (Green Coast – Tiana) put in a fluent gallop in the homestretch to keep a bunch of horses snapping at her tail at bay. She worked her way up close behind front running Southern Crown and News O’ Star and pounced on the leader soon on turning for home.

Once into the lead, apprentice jockey Afroz Khan drove Meka’s further away to build a handy lead. Lackhart, Durango and Solar Heights were coming around and were hard at work. It still looked headed for a closer finish at the distance post, however, the L D’Silva trained filly showed a lot of resolve to keep the momentum going, staying safely ahead of the trio behind. Meka’s eventually sealed the issue, winning by just under two lengths. Solar Heights won a battle of sorts clipping off Lockhart and Durango for the runner-up slot.

Laxman Singh saddled his third winner for the day with Super Dart (Old Fashioned – Corlett) who was ably ridden by jockey Suraj Narredu and thrilled his supporters while scoring a facile victory. Super Dart wasted no time as he took charge early in the straight and worked up a fiery pace to stretch out nicely and compile a facile victory. The Special One improved positions and ran on to finish a good four lengths plus behind the winner. Dunkirk ended in the money, a length ahead of Shaquille.
Call of the Blue (Chinese Whisper – Nightlife) saddled by Sequeira, preferred the mile-and-quarter trip to come good and notch up his maiden win. Call of the Blue did make a ‘grand entry’ at the business end of the race.

It was evident that a pot-boiler was building up as Ashwa Arjun was joined by Alta Vita and Ajmal Birju soon on turning for home, with Royal Style and Wings of Eagles joining the fight. Wings of Eagles never looked comfortable as she was pulling her head outward repeatedly. By the time the jockey got her on even-keel the fight was already fierce, but Wings of Eagles caught up and even headed Royal Style and Ashwa Arjun. Just when it looked like Wings of Eagles had got it right, Call of the Blue arrived with blinding speed, timing his run to a nicety. Jockey Akshay Kumar had lent his magic touch alright as Call of the Blue sprang on the trio and managed to stick his neck just on the last stride to swoop upon them and snatch the verdict on the post.