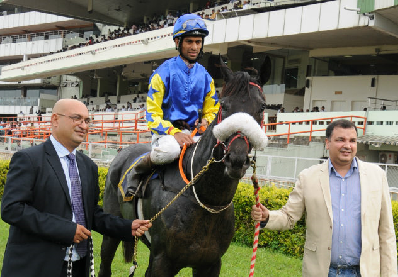 Yours Forever and Victory Parade were up in front while Impavid with Trevor astride, chose to sit back in the mid-bunch. Impavid travelled beautifully all the way and when they turned for home, Trevor just had to guide the Arjun Manglorkar trainee and let Impavid do the rest. Impavid cruised past the front runners with ease and then accelerated well and looked the winner some distance away from the winning post. Royal Crystal finished on purposefully and caught the eye while reducing the margin to just about a length. The one-two result for Manglorkar would have been a welcome one considering the agonisingly close seconds that Impavid had to go through in his last two essays.

LVR Deshmukh trained Francis Bacon (Born To Sea – Look Over) finally came good after a couple of led downs in his earlier runs when fancied. He was up and ready this time sitting close behind leader Excelsior until the turn. Jockey Neeraj Rawal did not wait too long and surged past the leader at the turn and once into the straight accelerated sweetly and build up a handy lead and galloped on gamely to achieve his maiden success. Those close behind were struggling to keep pace, while Star of Tiara finished on well to take the runner-up spot. Born Greek and Miss marvellous took the minor placing.

Robin Reddy’s ward Mr Shanghai (West Virginia – Shanghai Gal) won the upper division of the Mirza Zunnur Ahmed Memorial Trophy and created a flutter at 12/1 beating Egyptian Prince comfortably by about two lengths. Egyptian Prince shaped well and looked on course when he sailed past early leader Run Runner Run. However, when Mr Shanghai showed up drawing level with a furlong to go, Egyptian Prince surrendered without mush resistance. Mr Shanghai with jockey Kuldeep Singh in the saddle, marched on ahead to score from Egyptian Prince and Dandy Man. Favourite Sublime ran poorly and disappointed a large following.

Another long-shot in Shiloh won the lower division of the race at even longer odds of 20/1. Shiloh (Gaswar – Aptiana) took chafe after the first furlong and then led them into the straight. Apprentice jockey RS Jodha relied on his pushing and kept the Netto ward going. Favourite Satin Symphony had to be ridden all out to bridge the gap but he was doing so. Had Shiloh faltered, Satin Symphony would have nailed him, however that was not to be as Shiloh kicked on resolutely to stay ahead at the wire. Satin Symphony tried his best but found Shiloh’s resistance hard to counter. Brave Warrior ended a further two lengths behind to save place money.

Dunkirk (Surfrider – Associate) saddled by Mir Faiyaz Ali Khan locked horns with le Mer in the final stages to carve out a win by a narrow margin. Le Mer had amassed a handy lead in the final two furlongs and was going strong when Dunkirk started to warm up. Past the distance post it still looked like La Mer could go all the way but Dunkirk started to close in at a brisk rate. Miss Lily lurked close behind but failed to quicken. Dunkirk, with apprentice Afroz Khan astride, picked up momentum that was fast enough to surge past the fighting La Mer. Miss Lily ended a tame third.

The Great Gatsby (Speaking of Which – Cest Bon) dominated the second race winning it as he liked. He shot into the lead soon on start and carried on majestically to score a handsome victory without being troubled at any stage. Inside the homestretch, as the Laxman Singh trainee galloped on, Paso Robles improved positions and did well to take the next best slot. Private Empire too improved to beat Lock Stella for the place stakes. While The Great Gatsby is most likely going to achieve a hattrick when out next, Paso Robles too can be optimistic about adding to his win tally the next time out, that is if they don’t clash again.
Honest Hunter (Gaswar – Kilspindie) trained by Waseem Ahmed and ridden by jockey Kumar, sizzled in the straight to win in a convincing manner. He took charge early in the straight and surged past Star Gazer to speed ahead powerfully. Dancing Doll improved and gave a chase, but found the winner too good. Max, who was not off to an ideal start improved well and ended a good third under the circumstances. Favourite Rapid Fire was a big disappointment.

Ananta Vatsalya trained Limousine (Western Aristocrat – Hekayaat) won the concluding race of the day with a fair measure of comfort. Jockey Afroz Khan chased leader Patron Saint all the way into the homestretch. However, once they turned for home, Limousine darted ahead to compile a fairly big lead and left the others to chase her down. Ultimate Risk and New Hope tried in vain to catch up, but Limousine was on cruise mode and finished on well to stay well ahead at the wire. Favourite Royal Dancer never looked in the hunt, but improved positions to take the only spot left in the frame.

Apprentice jockey Afroz Khan was the lone pro to score a double.