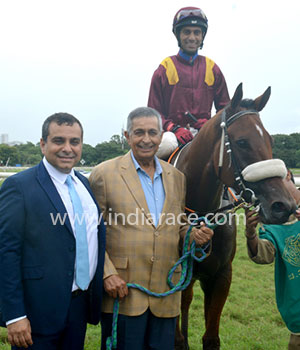 Imtiaz Sait trained Iron Age (Strong Suit - Intrigue, Manjri Stud) scored a resounding start to finish win and was a lot more impressive this time than he was during his last conquest. Jockey P Trevor had no difficulty in guiding him to the front from the outside draw and the champion sprinter showed a quick turn of foot to take charge early in the race.

Iron Age had lady Legend and Clymene close behind with a closely huddled pack charging right behind. However, Iron Age was in fine rhythm and stayed ahead all the way accelerating sweetly and keeping a safe distance from his rivals to post a handsome victory. While the nearest two fell back, the minor slots were hard-fought with a lot of horses scrambling through to take a place in the frame. St Andrews and Gazino took the plum places behind the winner.

Pesi Shroff trained Seventh Mile (Phoenix Tower - Gobelin, Manjri Stud) made ample amends for her past failures and scored a fashionable win to thrill her supporters. She was off to a brisk start as jockey Zervan cruised into the lead with King Solomon and Thea's Fire close behind. Bait and Switch was not too far behind while Ithaca raced in the rear.
Thea's Fire got past Seventh Mile well before the turn but could keep pace for only about a furlong and half as she meekly surrendered the lead back to Seventh Mile approaching the turn.

Seventh Mile assumed command and then strode out fluently and amassed a good lead entering the homestretch. None from behind could challenge the winner and Seventh Mile galloped away to score a facile win. Ithaca improved the most and beat the rest comfortably to finish a fairly good second. Bait And Switch had an ordinary outing ending a tame third.

Jockey Sandesh scored a fine double guiding Golden Era (Sedgefield - Feona, Jai Govind Stud) to an easy win in the day's opener. Golden Era was up in front just behind leader Galloping Star until the turn. Sandesh made a quick move soon after turning for home and the Adhiraj Jodha trainee responded promptly to speed ahead and draw away from the field. He was out of reach and looked the winner the moment he shot into the lead. Splash was ridden hard as was See The Sunrise to finish well behind Golden Era.

Sandesh then partnered Zenon (Champs Elysees - Questa Nova, Nanoli Stud) to a thrilling victory, coming from a long way back to spoil the party for Augustus Caesar close home. Zenon was detached last as the field turned for home and favourite Augustus Caesar shaping up well in the straight. Just when it looked like Augustus Caesar had it all covered, Zenon arrived with a big gallop inside the final 100 meters timing his run precisely and gathering enough momentum to cover that much ground and surge past Augustus Caesar a stride or two from the winning post.

Westros (Western Aristocrat - Monopoly, Nanoli Stud) achieved his maiden success with a fine start to finish effort, piloted by apprentice jockey P Vinod. The lad carefully guided the Dallas Todywalla trainee to the front and then seized his moment keeping the colt close to the fence and galloping at a good clip. They entered the straight with a handy lead and Westros kicked on gamely to stay well ahead of the chasing few. he won comfortably finishing just over a length from Outstanding and Shapath.

Stick to the Plan (Tariq - Balance De Power, Equus Stud) was another won to score a maiden win on the day. Settling in the mid-bunch Stick to the Plan made steady progress to be in striking position at the turn. American Odyssey took charge soon on turning for home and led until deep into the straight. Jockey Stick to the Plan with jockey CS Jodha astride started to catch up with American Odyssey. The pair fought out a few strides before Stick to the Plan moved ahead. just when it looked that he would have it easy, Suarez arrived with a belated challenge that did cause some anxious moments for the former, but he held on grimly to score by half a length. Suarez was the fastest at the finish, but the winning post arrived a tad too early for him. American Odyssey, for a first run, did not do too badly while taking the third spot.

Jockey A Sandesh was the lone pro to score a double.