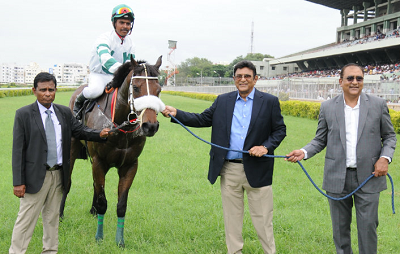 M Satyanarayana trained Moondancer (Excellent Art - Pleasure Hunt) put in a strong and sustained gallop in the homestretch to ward off a late challenge from main rival and first favourite Isabella in a close finish. Moondancer was out quickly and settled close along the rails just behind Prespero, while Isabella never looked completely settled and found herself in a close huddle with horses rubbing shoulders on either side.

Prospero galloped on giving it his all and Moondancer found it hard to get past the leader. Even as this pair was engaged in outpacing one another, Isabella was trying to wriggle free and she did so inside the last 400 meters. That gave a slight leverage to Moondancer who wore Prospero down and apprentice jockey Rohit Kumar got him going to surge ahead and build a handy lead. Isabella, once in the clear, arrived with a fiery gallop and covered considerable ground only to see the winning post arrive a stride or two too early for her. Moondancer escaped to victory by a neck! Isabella ended a fighting second, while Prospero finished a good third.

Apprentice jockey Afroz Khan was the star performer of the day booting home a fine treble. The lad is evidently picking up on his riding skills and growing in confidence.

He started the day on a positive note astride trainer Ananta Vatsalya's ward Lockhart (Sedgefield - Adams law) a seven-to-one shot in the first race of the day. He rode Lockhart with a never-say-die attitude and got the gelding going when it seemed that long time leader King Maker would kick on and build on his handy lead in the stretch.

King Maker was way ahead approaching the distance post with Lockhart in fourth, Durango was last to turn for home and skirted around horses to make his bid from the wider outside in the straight. Lockhart started to bridge the gap and then finished on full of steam. King Maker weakened in the last 100 meters too making Lockhart look a lot faster. The fastest to finish however, was Durango who covered a lot of ground briskly in the final run to the wire, where Lockhart put his neck in front of King Maker and Durango finishing less than half length behind King Maker in a thrilling three way finish.

Afroz Khan then partnered Versallis (Green Coast - Delacruz) and rode out powerfully to launch his assault early in the straight and last out the long Hyderabad straight.

Rahil led them into the straight with Versallies ready to pounce on the leader. Marinetti went for the gap alone the rails, but never could raise a quality gallop. Aon Aon Aon looked good for a brief while and last start winner Pontius Pilate was seen laboring along on the outside. Versallies was relentless and she kept the momentum going warding off Aon Aon Aon to win by a length. Pontius Pilatus ended third ahead of One One One. Marinetti finished one off the frame without raising any hope at any stage.

Afroz Khan signed off in style with another forceful ride atop Faiyaz Khan's Stormy (Express Wish - Beldon Hill) in the concluding race of the day. Stormy was in fifth approaching the turn and jockey Feroz took the gap between horses to be up in the fore-front. halo's Princess made a sustained bid from the outside and these two fought stride for stride inside the final furlong, with Stromy managing to squeeze out that extra speed in the last few strides to get the better of halo's Princess. Turf emperor, who was not in the best of positions in the straight improved well towards the end to finish in the money, not too far from the top two.

Jockey Akshay Kumar has been in sublime form again this season and he too chipped in with a double on the day. He first piloted Laxman Singh trained Nazariya (Whatsthescript - Mother's Pride) to a hard fought win snatching victory on the wire from Actually. These two were up in front with the rest following them through the entire journey.

Actually led them into the straight and soon Nazariya came up with a challenge. Buttonwood and company just could not match up to them. Nazariya took a slight upper hand in the final furlong but Actually put in a strong fight and never let Nazariya to skip away. An interesting duel followed with both riders involved in an intense battle that went all the way to the wire with Akshay Kumar just managing to carve out victory by a slender margin. Actually was a gallant second. Buttonwood improved to finish a close third.

Akshay's next success came astride Linewiler (West Virginia - Shades of Beauty) saddled by L D'Silva. Mehrzad led them into the straight and soon Safra and Linewiler joined the leader. While Mehrzad weakened in the final furlong, Safra and Linewiler sped ahead matching strides and going neck and neck. Akshay Kumar rode out skillfully to finally provide Linewiler his maiden victory. Safra ended a good second while Star Racer finished in the money.

LVR Deshmukh trained Amazing Script (Whatsthescript - Fearless) lived up to the promise she showed in her last run and carved out a comfortable victory. Favourite Darshish and Amazing Script were quickest out and dashed to the front staying well ahead of the rest. once in the straight, Amazing picked up momentum and raced past Darshish who resisted for a couple of strides before surrendering. Amazing Script, with apprentice jockey Surya Kumar in the saddle, then quickened well to stretch away and win handsomely. Crimson Fire worked hard to take the runner-up berth while Brush The Sky beat Darshish for place money.

For the professionals, apprentice jockey Afroz Khan was the star of the day riding out three winners, while jockey Akshay Kumar scored a double.