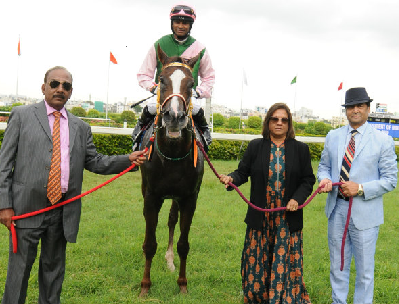 One look at Desert God's latest triumph in the President of India Gold Cup (Gr2) and you know why the say 'Age is just a number'! All of seven now, Desert God (Burden of Proof - Running Flame) swamped a much younger set of rivals and with a measure of comfort. The Padmanabhan trained champion horse, had it easy right from the start and chose when to go to the front and at what pace as well. He displayed complete supremacy as early as through the backstretch as he free-wheeled out in front leaving the rest in complete disarray.

It was more dominance in the homestretch as jockey Sandesh showed no mercy and sped further ahead to compile one of the most facile victories notched up in the prestigious race. Desert God recorded his third straight win in the President of India Gold Cup (Gr2) finishing well ahead of Secretive Force and My opinion. It was a familiar sight later on to see Padmanabhan along with wife Sharmila and partner Col Swapan Bhadra leading in their champion horse.

D Netto trained Phenomenal Cruise (Declaration of War - Firebird) responded well to jockey Suraj Narredu's urging and arrived with a forceful gallop in the dying moments of the race to peg back Ashwa Yashobali in the nick of time. Ashwa Yashobali had shaped well coming into the final 400 and with Be Sure struggling to close in as were the other runners, Phenomenal Cruise included, it looked like the young colt would hold on with Sandesh egging him on. Credit to Suraj Narredu here as he rode his heart out pushing the gelding and using the whip effectively and got Phenomenal Cruise to give off his best with that extra effort to get the nod on the wire. Ashwa Yahobali was unlucky to have missed out after looking good right through the straight until the final stride. Be Sure did enough to save place money.

Apprentice jockey did show a lot of skill while timing his finish precisely astride Magical Skill (Ontario - Lenwade). Proud Warrior eased into the lead soon on turning for home and galloped hard to stay ahead until into the final 100 meters. Scooby Dooby Doo and Magical Skill arrived with a big gallop and were eating up ground briskly, closing in on the leader at a good pace. Ashwa Yashobali fought until the last stride, but Magical Skill and Sccoby Dooby Doo just managed to finish ahead taking the top two spots in a close three way finish, Magical Skill coming up tops.

Yanga (Mull of Kintyre - Marieci) moved well along the rails to disrupt the start to finish mission that Arc of History who held sway until into the final furlong. Jockey Feroz Khan wise took the rail route once in the straight and started to bridge the gap to get closer to Arc of History. The duo battled a few strides with the riderless Pentagon  alongside causing some worry to Arc of History. Yanga eventually sped ahead to win by less than a length from Arc of History. It is likely that Pentagon's presence may have hampered Arc of History a touch, however,Yanga finished on better to score convincingly. Shaandar and News O'Star took the minor slots.

Debutante Kimberly Cruise (Top Class - Skyway) from trainer D Netto's stables, scored a facile win to impress on his debut. The dark bay filly showed fine understanding as she slipped into the lead early and enjoyed a slender lead turning into the straight. Dimension was close behind trying to build up a challenge, but a couple of timely reminders from jockey Kiran Naidu was enough to ensure that Kimberly Cruise pushed further ahead and accelerate sweetly to be eased up with a few strides still to go.She won by close to four lengths, thus making a promising start to her career. Dimension was beaten by a better rival; Golden Faraska improved in the straight to finish in the money.

Sequeira trained Reno Star (Royal Gladiator - Glenviews Purchase) raised his game to achieve his first success on his third start. Jockey Aneel held Reno Star in striking position as they turned for home. The fancied Aristocrats Charm was in charge when Reno Star started to inch closer. Reno Star got better in the business half of the stretch to surge ahead and score by over two lengths from Aristocrats Charm. Glendale ended a tame third.

Apprentice jockey Abhay Singh played a big part in Mahira (Diffident - Celebrity) slicing out Delphina in an electric finish. The fight began soon after Once More took charge past the 400 and before he could quicken to further his cause, Delphina and Mahira started to come at the new leader with telling strides. The swooped upon Once More with Mahira having a slight upper hand over Delphina. They dashed past the wire together with Mahira scraping home by a whisker.

Sequeira trained Strategist (Multidimensional - Dazzling Skill) carved out his maiden win on his second start. Jockey CS Jodha kept her handy in third behind Stepper and Flying Queen until well into the straight. Flying Queen got the measure of Stepper and just when she took charge Strategist began to accelerate strongly and within a couple of strides got past and away from Flying Queen to score an impressive victory. Flying Queen too looked good until Strategist came by and should not be disappointed by this loss. Stepper has some catching up to do.

For the professionals, trainers D Netto and RH Sequeira saddled a double each.