TENNO SHO WAS A CASE OF “VENI, VIDI, VICI” 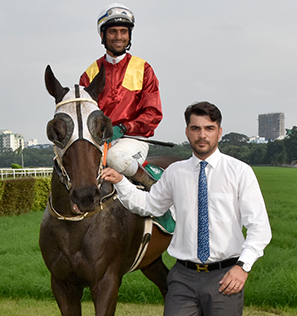 Trainer Neil Darashah’s three-year-old bay gelding Tenno Sho (Phoenix Tower-Namibia) produced a wonderful turn of foot in the straight to sail past course favourite Trafalgar and bag the Calcutta Colts Trial Stakes in style.  Second favourite Jaivant was never in it and finished a poor third. One has to doff one’s hat to the connections for taking the risk of doling out the final entry fee of Rs 3.37lakh and pulling off the coup. The migrant from Bangalore had only won a maidens’ race prior to this and was taking on seasoned campaigners. It was indeed brilliant assessment of his potential by the trainer and his team. He was racing dead last till the half-way mark where Trevor Patel gradually improved his position till he came within striking distance of Trafalgar. Thereafter, Trevor turned on the heat and it was all over bar the shouting. The victory of this final entrant who arrived only a few days back and lifted the plum without much ado, does not speak well of the local lot who were left floundering. The colt’s style of running suggests that he is likely to get the Derby trip of a mile and quarter.

Trainer Vijay Singh and jockey Suraj Narredu combined fruitfully to notch up a popular treble with After Shock, Multitude and Aashna. Despite his failure to Onederboy in his previous essay, After Shock (Arazan-Guy Grand’s al) was installed as the firm favourite in The Slade Valley Handicap. He did not disappoint his backers though Fantasia did issue a worthy challenge in the straight.

The duo next won the Stewards Cup with the ever reliable Multitude (Multidimensional-Haedi). The seven-year-old has been maintained in tip top condition by his mentor and he outclassed the field of four. The second favourite Big Orange ran a shameful last – 14 lengths behind the winner! Vijay and Suraj completed their treble with a much-awaited victory with the four-year-old filly Aashna (Win Legend-Ray Of Sunshine). It was a feather in the cap for her mentor who had struggled with the filly for the past year to regain her lost sparkle. Her last win was the prestigious Calcutta Million in February 2018. Suraj made the Class II seven-furlong race a start-to-finish affair.

The day’s opener saw Arti Doctor-trained Shimmering Star (Strong Suit-Shining Glory) complete a hattrick of wins in the hands of Trevor Patel. He showed a clean pair of heels to Marigold while Stunner left all her chances at the gates.

Apprentice Sujit Kumar Paswan, who had recorded a treble the previous race-day, was in his element while atop Bharath Singh-trained Fancourt (Saamidd-Oakdale) in the race for  the Setaflame Handicap. The lad had to fight tooth and nail for this victory as rank outsider Demonstrate was trying to run away with the race with apprentice Aditya Kumar Jaiswal. The last named is definitely one for the notebook. The Last Judgment was unable to carry his penalty to another victory.