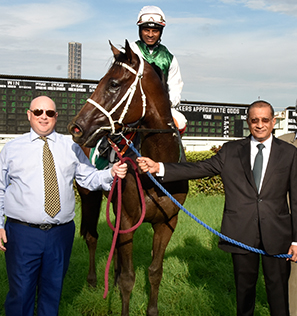 The highlight of the monsoon season, The Calcutta Monsoon Derby  Stakes, had all the ingredients of an absolute nail-biting thriller. James Mckeown-trained dark bay rig Trafalgar pulled off a spectacular victory in the Calcutta Monsoon Derby Stakes to pocket a winner’s purse of over Rs 26 lakh. Jockey  Sandesh seemed a picture of confidence from the outset as he kept the handsome son Western Aristocrat out of Bluegrass Phenom well off the pace while surprise pacesetter Jaivant galloped at full throttle. Once Sandesh asked for an effort in the home stretch, the big-boned beauty responded magnificently to spare three lengths to the runner-up at the wire. A proud and prominent part-owner of the victorious team – Mr Joideep Datta Gupta – said that he was a happy man to have won this prestigious monsoon plum for the third time (after Silverina and Sana).

The race was however not without incident. Joint favourite Tenno Sho was travelling a close fourth for most part behind Izzy and looked well placed to score. After heads turned for home, Izzy went miles wide and crashed into Tenno Sho who was making his bid  on the outside. The force of the impact pushed Darashah’s ward into the rails and took the wind out of his sails. He lost whatever chances he had of winning. Despite that huge setback, he came with a second wind to finish a fair second. In a way, it was lack of homework by the trainer and jockey of Tenno Sho as Izzy has been going wide in virtually every race she has been running, and to make his run on her flank was simply asking for trouble. Tenno Sho was in great distress (possibly psychological and physical) after the race and Srinath had to dismount after passing the winning post. The Stipes are going to take a closer look at the entire incident and impose penalties on the guilty where necessary.

The afternoon in effect belonged to the satchel bearers as favourites took a drubbing by and large. The supporting event, The Sana Cup run over seven furlongs, saw Javed Khan-trained Perpetual Winning installed as the public choice but he faded out at the distance post. Gritty Capricious and Sarfaraz Khan-trained  Shivesh (Multidimensional-Burooq) fought a keen duel from the distance post. The latter  ultimately prevailed with Imran Chisty going hell for leather

Trainer Vijay Singh enjoyed a treble and sent his tally of winners soaring to 31. The first of his three winners was the friendless The Stradle (Dancing Forever-St Finian’s Bay) who got the better of the favourite Shimmering Star in the race for the Stoney Valley Handicap. Hindu Singh was the man in the saddle, The other fancied runner Astoria was never in it. Vijay’s next winner was Cold Frontier (Admiralofthefleet-Cool Jazz) in the Captain Cook Handicap. It was Suraj Narredu’s first of two winners. The public choice Fiorelle was a worthy second. The ante-post even money favourite Sniper called the early shots before fading out.

Gauging horses by their winning verdicts can often be detrimental to the interests of a punter. Sniper never had a chance on handicap! Suraj and Vijay combined next to bring home the bacon with After Shock (Arazan-Guy Grand’s Gal) in the day’s final event – The Ascriptive Handicap. The favourite Eastside failed to match strides with the long striding front-runner. It was Big Star who occupied the runner-up berth. All three of Vijay Singh’s winners ran in the green and gold colours of Mr Subir Dasgupta – making them a formidable team that is the envy of professionals and owners alike. Kudos to the extra-ordinary performance this monsoon  of the champion trainer at this centre!

Trainer Daniel David’s six-year-old Hurricane Storm ( Hurricane Center-Paddy’s Dasher) produced an encore, thanks to Akshay Kumar’s powerful finish which kept at bay Mrs Willy Nilly who was threatening to pull it off. The favourite Yutaka burst his blood vessel. Yet another surprise winner was Caiden (Net Whizz-Kentucky Queen) in the mile race for the Alice Springs Handicap. Fancied runners Loubutin and Hukumat were far away second and third respectively with only half-a-length separating the duo.