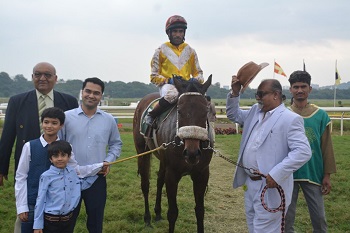 Pleiades led from the start with Furiosa and Westeros close behind and En Sabah Nur improving to the fourth position at the turn. Polyneices was further away but making headway as they turned for home. Pleiades could not counter when En Sabah Nur breezed past him and jockey CS Jodha sped ahead building up a handy lead approaching the distance post. Polyneices had some ground to cover and he was inching closer alright but not fast enough. En Sabah Nur had a good momentum going and he thwarted Polyneices advance, carving out his maiden victory by just under a length. Polyneices ended a good second, while Pleiades held on to take the place stakes finishing ahead of Godsword. Highland Woods made good progress in the straight to finish one off the frame, but right alongside Godsword.

All eyes were on Pesi Shroff’s got-abroad filly Sea The Dream (Sea The Stars – Navajo Dream, Equus Stud) and the filly did not disappoint at all. She settled nice and early letting Brilliant Gold take over the running all the way until into the straight. The rest were going about the motions and never really looking the part in the entire race.

Sea The Dream drew level with Brilliant Gold soon on turning for home; Brilliant Gold resisted for a few strides and stuck by the favourite. However, it was a matter of time before Sea the Dream picked up acceleration and shot ahead. She did move inward though and Brilliant Gold might have brushed the inner railing, but then Sea The Dream with Neeraj Rawal in the saddle, kicked away to score by more than two lengths. But for that bit of veering-in, it was a clinical victory for Sea The Dream who notched up her maiden win on her second start. Brilliant Gold’s rider  could complain that he had to check at a crucial time, but there is no denying that Sea The Dream was finishing on better of the two long before she zipped away. Neeraj Rawal started well with this one and rolled out two more on the trot to compile a pleasing hat-trick.

Neeraj next partnered trainer S Waheed’s Augustus Caesar (Holy Roman Emperor – Snowy Day In La, Equus Stud) and guided the favourite to a fairly easy victory. On a start to finish mission, Augustus Caesar took a while before going past Flying Visit; Sagittarius was next with Beshiktash, Grand Accord and Zenon followed close behind until the turn.

Augustus Caesar skipped away strongly once into the straight and Flying Visit tried hard in vain to catch up. The Altamash Ahmed trainee was resolute in his finish and didn’t even give a sniff of a chance to Flying Visit and company and sped away to score his second win this season and third overall. Flying Visit found the winner too good on the day.

Neeraj compiled his third win astride S Waheed trained Gdansk (Dancing Forever – Sinner Girl, Hazara Stud) who won the Pune Cantonment Board Trophy with a measure of comfort. Gdansk too settled well with the pace chasing leader Fanfare all the way into the straight. The rest were not too far away, with Brazos improving steadily to be in third at the turn.

Gdansk cruised past Fanfare soon on straightening for home and once in the lead, Neeraj added the finishing touches and stayed well ahead of the rest. Gold Medalist showed signs of making a race of it, but could only draw a bit close and not throw any serious challenge. Gdansk strode out well all the way to pick up his first win of the season after a couple of good consistent performances. Mishka’s Pride, worked hard to get past Fanfare and Brazos to earn the place stakes.

Noshir Cama trained Loraine (Mull of Kintyre – FourpennyLane, Sohna Stud) was perhaps the most impressive winner of the day. He played it with patience and settled the in fifth spot, well behind leader Fleur De Lys for most part of the journey. Jockey Yash Narredu read the pace well for the 2000 meters race and was unmindful even as Khartoum and Golden Hind attempted to get away early as they approached the final turn. Khartoum faded out soon while Golden Hind got past the leader with ease. Yash Narredu brought Loraine nicely along and without looking too aggressive, coasted ahead of Golden Hind with ease; just a crack or two was enough for Loraine to surge away from Golden Hind and score a facile win, her second on the trot this season. Bhaktawar finished on well enough to peg back Golden Hind to secure the runner-up berth more than five lengths behind Loraine.

In the opening race of the day, Zadmal Singh trained Allegria (Chevalier – Splendid Monarchy, Ruia Stud) was ridden nicely by apprentice jockey A Prakash who was out quick and tagged close behind leader Bohemian with Sixth Emperor and Psychic Fire  following closely. Allegria took charge soon on turning for home with Bohemian sticking by for a while. Maestro had a good rail run but failed to quicken and was getting nowhere; none of the others made an impact on Allegria either and the mare drew away. Allegria accelerated nicely in the final furlong to rush ahead and away from the rest to compile a facile victory with a margin of three lengths. Bohemian fought the rest stubbornly to finish second. Psychic Fire did well to finish a close third.

Apprentice jockey Malam Singh sustained a fall in the first race and it looked a bad one, as Theobroma stumbled just before the bend. He is however, out of danger and is under mandatory medical observation.

The last race of the day was a real humdinger with Verdandi (Knights Tour – Sierra, Sans Craintes Stud) nosing out Isinit on the last stride. Thea’s Pet and One Eyed Princess led the field home and soon Isinit made a forward surge to take charge. Verdandi looked in trouble at the turn as she was stuck along the inner rails covered with horses on all sides. Apprentice jockey A Prakash did extremely well to take the gaps early in the straight and once he saw daylight, approaching the distance post, he swung into action pushing aggressively. Isinit was finishing fast as well, but Verdandi accelerated quickly to launch an all-out assault. They dashed past the wire inseparable to the naked eye. Verdandi won it by the smallest of margins to bring about her memorable maiden win on her third start. Trainer Nirad Karanjawala has obviously done well with the filly as she had not hit the frame in her previous two runs. Isinit was unlucky to see a good effort go down in such a close finish. Adams Beginning ran a decent third ahead of Cracklin Rosie.

For the professionals, jockey Neeraj Rawal scored a fine treble while apprentice jockey A Prakash scored a double.