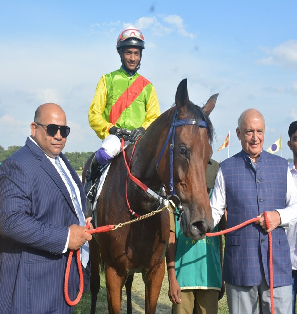 Auburn (Champs Elysees – Atwirl, Nanoli Stud) sizzled yet again for the second time this season and followed her facile victory in the Class I Alaindaire Trophy with another fashionable victory while pocketing the Threptin Fillies’ & Mares’ Stakes (Gr3). The five year old mare had surprised most on her last win, however, this time she attracted more than a few supporters in the betting ring.

Auburn, with jockey Akshay Kumar in the saddle, got straight down to business and soon established a handy if not commanding lead at the half way stage. Roberta, who was in second all the way until there, started to feel the pressure much earlier than expected and looked a spent force even before they turned for home. The same could be said about Watchmyscript as well. With the two main rivals disposed-off a lot sooner than expected, Auburn looked the winner long way from home. Turning Point and La Rondine seemed to be making some progress but that was due to them getting past the tiring duo and they made no impact on Auburn. The Vishal Gaikwad trained filly was in a zone of her own and looked far superior to her top class opponents. Auburn cut a fast timing too stopping the clock at 1:50:45 – split-seconds shy of Commodore’s record of 1:50:07 – this without having to fire on all cylinders! Turning Point held on from La Rondine for the runner up berth.

Trainer Shiraz Sunderji and jockey CS Jodha had a fruitful day scoring three winners on the day. They started with Athulya (Phoenix Tower – Jawa Bleue, Manjri Stud) in the opening race of the day. Athulya lived up to expectations of her last out second and built nicely on that forward finish. She was a lot fitter and that showed in her finishing effort.

Principessa led them into the straight with favourite Queens Gate looming large on the outside. Queens Gate shook off the leader with ease and just before she could make a break for it, Athulya came up with giant strides to blow her hopes away. The moment jockey CS Jodha brought Athulya alongside, it was clear that the filly was going to draw away. She picked up speed readily and was off and away within strides to compile a fine victory with healthy margin. Queens Gate was clearly overwhelmed and ended a tame second ahead of Sir Ramon.

Sunderji’s next winner was Bait And Switch (Varenar – Najah, Equus Stud) who had led down a large number of supporters last time. He made ample amends as he caused no anxious moments to his backers, sitting close behind leader Shae until the turn and then zip ahead with a powerful burst that was enough to floor the rest early enough to ensure a comprehensive win. The way she took off form Shae was remarkable and jockey CS Jodha had little to work for as the gelding picked up speed on his own and won easing up by a big margin. Black Cherry worked hard and did well to take away the runner up berth which Shae was vying for after Bait and Switch took over.

Sunderji struck again in the very next race, the October Handicap with long-shot Makhtoob (Speakingofwhich – Adara, Usha Stud). There were no takers for Makhtoob and understandably so as he had done nothing of note after his debut win. His ran too was a poor effort. However, Sunderji worked wonders with the gelding and turned fortunes around; Makhtoob latest spurt was eye-catching but few bought it as he his last run was way below par.

Makhtoob and CS Jodha had to work their way up after finding themselves closer to the rear end of the field until the turn. Copper Queen showed good early speed and led them deep into the straight. Thea’s Fire was up close with the leader; fancied pair of Divine Glory and Mirabilis was not too far away with Sandman and Properly Posh just ahead of Makhtoob, who had only Shadows behind him.

Makhtoob stuck to the rails and jockey Jodha weaved his way between horses to challenge Copper Queen at the distance post. Sandman made his run on the outside; Neither Mirabilis nor Divine Glory got going, while Makhtoob quickened well to dart ahead in the final furlong to score a comfortable victory. Sandman could only beat Copper Queen and had to settle for the runner up berth.

Sassy Lass (Excellent Art – Mooring, Poonawalla Stud) produced a short burst of brilliance to not only beat those in front in the final furlong, but also ward off strong and determined late flash that Arc Shine showed in the dying moments of the race.

Slam Dunk was shaping well after entering the straight ahead of the rest, but soon Domination drew level and snatched his lead. Sassy Lass made her way up and picked up speed to breeze past the two with jockey Neeraj Rawal going all out on the Asad Siddiqui trained mare. She responded beautifully and just when it looked it was all over, Arc Shine arrived with a terrific burst and the got threateningly close but the winning post came to the rescue for Sassy Lass as she had the nod right at the wire. Domination and Slam Dunk took the minor slots.

Jockey Yash Narredu rode out exceptionally well astride His Master’s Vice (Rebuttal – La Crème, Hazara Stud) and spoiled the party for Adonijah. The lead changed a couple of times in the first half of the race as Dazzle N Daze gave it up to Master of Studies and then wrested in back again to surrender it to Saddle In The Wind at the turn. Adonijah was going steady in the fifth spot and surfaced at the right time as they turned for home. All the while, Yash played the waiting game and was behind the closely huddled bunch.

Saddle in the Wind had barely taken charge when Adonijah decided to challenge the new leader. With Saddle in the wind not resisting, Adonijah sailed past and worked up a handy lead too. However, just when it looked like he was safely ahead with only 100 meters or so to go, Yash unleashed the Adjiraj Jodha trainee. His Master’s Vice responded with a strong finish and managed to pip Adonijah on the post to etch out a thrilling victory on the last stride. Mr Honey finished on well to beat Saddle In The Wind for the third spot.

The front bunch was tightly grouped with Sandalphon slightly ahead of the rest while leading them into the straight. Soon Cecelia took over and surged ahead. Forever Free, who was a close third, accelerated well to join Cecelia and they fought for a couple of strides before Forever Free (Ontario – Born Free, Sohna Stud) with Akshay Gaikwad astride, sped ahead and opened a handy lead. Once ahead, the Adil Dajee ward kicked on spiritedly, leaving nothing to chance and finally achieved his maiden victory on his 27th Start. Cecelia beat the rest comfortably, while Dragonmoss came from behind to snatch the place money ahead of Lilibeth.