SIYABONGA BOUNCES BACK TO HER BEST 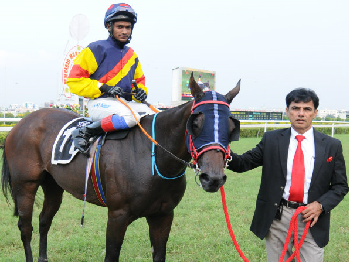 Siyabonga (Kingda Ka – Carousel) who had a good run right from her debut little over a year back and had never fallen beyond the runner-up mark, had suffered a crashing defeat last time out. She was off the frame for the first time in her career of seven starts until that run. Her defeat had the stewards question the jockey and trainer on her poor performance. Well, that proved to be a one-off as the Laxman Singh trainee bounced back to score an emphatic victory this time and justified the strong support she received despite the loss.

Jockey Akshay Kumar settled Siyabonga close behind leader Pentagon until into the straight. Pentagon was not going to make it any easier for Siyabonga as he held on stubbornly even as Siyabonga drew alongside. They matched strides until inside the final furlong with Siyabonga now dominating at the business end. She shook off pentagon and surged ahead galloping strongly to steer clear. The well backed Shaquille made a dash for it in the last 50 meters but could only account for Pentagon and finished just under two lengths behind Siyabonga. Trump Girl finished on under the whip, having to switch lanes to finish fourth close behind Pentagon.

Durango (Sedgefield – Friendly) saddled by trainer Deshmukh, was well ridden by jockey Ajeeth Kumar who stayed towards the rear for most part of the long journey. Chase Your Dreams led until the turn and then faded out. Durango made a good move approaching the final turn as he dashed past the front runners and readily took over the running entering the homestretch. That proved to be a master move as Durango galloped away building up a sizable lead, putting immense pressure on the hot favourite Mark My Word. Durango left nothing to chance and darted away merrily to score a very comfortable victory. Mark My Word toiled away without hope and ended a tame second.

Jockey Suraj Narredu was the star performer of the day booting home three winners all of whom were popular fancies in their respective races. He started the day well partnering Arjun Anne’s Ayur Shakti (Midnight Interlude – Excellent Day) helping the filly achieve her maiden win on her fourth attempt.

Ayur Shakti had it easy all the way as she cruised into the lead early and marched on ahead all the way past the post. Jockey Suraj Narredu literally had an armchair ride to victory as he kept extended the lead in the homestretch without encountering any challenge whatsoever. There was not much change of action behind her either as Star Racer chased her all the way as did Southern Lady who was behind them. They all followed Ayur Shakti tamely and it really was a no-contest.

Suraj next piloted Southern Legacy (Tazahum – Gracious Melange) saddled by Laxman Singh. This one was hard labour as Suraj had to really get the colt past two strong rivals who were putting up stiff resistance.

In the very next race Suraj had another hard battle while guiding Safra (Royal Gladiator – She’s Hip) to her maiden win. This time he had to ward off two serious challengers looming large in the final furlong.

Original Temptress led them into the straight and was trying to get away when Safra started to wear her down. Safra got past to take charge with a furlong to go when Augenstern arrived with threatening strides. Green Turf too started to make her presence felt poking through between the two. It was a three way fight all the way to the wire, with Suraj doing his best to stay ahead and finally hold on by a narrow margin from Green Turf and Augenstern in a thrilling finish.

No Compromise (Gusto – No Complaining) secured a back to back double as he fought well to score an encore. It was hard work though as Sporting Smile stood in his way in the final furlong.

King Maker led them in and fell back as Sporting Smile and Lockhart got past him. No Compromise was being nudged and pushed to step up pace and he warmed up nicely past the 300 m mark; while Lockhart couldn’t quicken, Sporting Smile picked up good speed but was leading by a small margin. No Compromise put in a strong bid and started to inch closer. With a hundred to go, it looked anybody’s race, but jockey Akshay Kumar got that extra bit out of No Compromise to seal the issue with a powerful thrust in the last few strides to win in an exciting fashion. Sporting Smile had to be content with the runner up slot, while Gusty Look improved to finish third.

Deshmukh’s Actually (Royal Gladiator – Antilia) was another one who had to battle hard to keep her lead all the way. She took charge early in the straight and had to last out the long stretch. The challenge came from Valee Tiger who put in a spirited run and was threatening to slip ahead all the time in the final furlong. Apprentice jockey Surya Prakash held his nerve and rode out strongly to ward off the challenger and carve out a narrow win. Valee Tiger ended a gallant second, well ahead of Charlie Brown.

Favourite Starboy was surprised by Kesariya Balam (Knight’s Tour – Brindisi) who was racing after a very long break, hence was neglected in the betting. Starboy looked on course as he led them into the straight and had a handy lead too. However, Kesariya Balam started to accelerate well and soon pounced on the leader. Starboy, to his credit, fought hard and never gave up. The pair fought out the last furlong and half in a neck and neck battle and Kesariya Balan, with apprentice jockey Abhay Singh in the saddle, got the nod right and scored a narrow victory. Starboy’s good effort went down but he will live to fight another day. Sun Dancer finished third a long way from the pair in front.

For the professionals, Trainer Laxman Singh and jockey Suraj Narredu scored a treble each. Trainer LVR Deshmukh and jockey Akshay Kumar notched up double each.