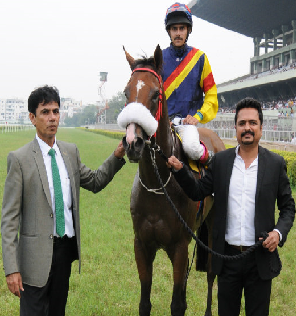 Marinetti (Fast Company – Maynsha Girl) finally broke the shackles and added to his two wins scored at the start of hiscareer in December-January. After an unsuccessful journey to Mumbai, Marinetti lost twice after returning to Hyderabad and was strongly fancied on both occasions. This changed for the good for the Laxman Singh trained gelding as he picked up well to score a fighting win and claim the G Sudhakar Rao Memorial Trophy with a gritty performance.

It was not all smooth sailing though as Marinetti was down the field in the mid-pack as Lighting Fin led the field homewards. News O’ Star was progressing well as was Marinetti from the outside. Pontius Pilate sought the gap along the inner rails and was making headway alright. Marinetti, with apprentice jockey Gopal Singh in the saddle, picked up good speed approaching the distance post and surged ahead to grab the lead. Pontius Pilate charged in through the rails to challenge Marinetti and the pair fought out the final 100 meters. Marinetti always had the upper hand and was able to smother the challenger to score a much needed victory by half a length. Pontius Pilate ended a fighting second, comfortably ahead of News O’ Star.

Jockey Suraj Narredu made a steady progress in closing in on the landmark of achieving 2000 winners, booting home four winner on the day. He started the day on a winning note astride trainer D Netto’s Palsy Walsy (Green Coast – Genevieve) in the first race of the day.

Palsy Walsy started well and settled in second just behind NRI Heights who led until into the straight. Suraj Narredu got into action soon on straightening up for home and made a powerful forward surge leaving it for the rest to chase him down. Tokyo Jam was ridden all out, yet was making little impact on Palsy Walsy. None of the others seemed a threat. Palsy Walsy raced ahead in the final furlong to win without putting in any extra effort. Tokyo Jam held on from Barnabas, the latter finishing on well to pick up the place stakes.

While Palsy Walsy was a well-backed favourite, Suraj next win was atop the six-to-one shot Tammana from trainer Fayaz Ali Khan’s yard. Here too Suraj sat up close in third behind Golden Adara and Negress Princess and wove his magic once they entered the homestretch. Negress Princess galloped gamely giving a tough fight to Tammana (Varenar – Deeleecious). Both went stride for stride in the final furlong, before Tammana picked up and finished well to surge ahead and win by more than a length. Negress Princess was a worthy second, going down fighting all the way. The well backed Withrosemakeup ran under par finishing a tame third.

L D’Silva trained Miss Marvellous (Crimson China – Gamay Beaujolais) finally struck a telling blow to score her maiden win on her 10th start. Jockey Suraj Narredu was in action again astride the filly. This one too was at 9/2 and those following Suraj on the day ought to have reaped rich rewards.

Favourite Jo Malone had everything going for him as he had a sizable lead coming into the straight. Miss Marvellous improved positions in the straight and began to cut down the lead. Jo Malone failed to sustain and although he was a clear two lengths ahead of Miss Marvellous past the distance post, it was evident that he could not match the finishing speed of the filly. Within a couple of strides Miss Marvellous was all over Jo Malone and sprinting away impressively to win by a widening margin. Jo Malone fell further back as both Tiger of the Sea and Unstoppable got past him to finish in the money.

It was Narredu again in the last race of the day, this time guiding Marvel Princess (Mull of Kintyre – Queveda) to a comfortable win for trainer Prasad Raju. Marvel Princess was out quickly and led the field right from the start. Once in the straight, Suraj Narredu rode out confidently speeding ahead and galloping on. None of those close behind him including favourite NRI Vision, could measure up to Marvel Princess. Handsome Duo made a valiant attempt to offer a challenge, but he could only beat the rest and resign to take the runner up berth faring well to bridge the gap and cutting down the margin to below two lengths. His Excellency added further woes to the favourite beating NRI Vision comfortably for the place money.

Earlier in the day, hot favourite British Empress (Win Legend – Deputy Princess) gave her supporters highly anxious moments before producing a flying finish to thrill them all. Magnetosphere led them into the straight and Star of Tiara moved up quickly to draw level with the leader. Jockey Akshay Kumar went for the rail run but was caught behind these two and looked in trouble. While switching lanes, he shifted further than anticipated and for a moment it looked like he would drift out. With not much ground left in the race, the alarm bells were ringing loud. However, jockey Akshay Kumar was up for it and he controlled the drift and pushed the Sequeira trained filly right on ahead. British Empress found fresh legs and shot ahead the moment she was on even keel and within the short span dashed ahead to score by over a length. Star of Tiara was beaten to second by a superior rival. Magnetosphere held on to stay ahead of Mr Shanghai.

Sreekant trained Gladstone (Chinese Whisper – Fleet of Flames) pulled off a coup in the fifth race of the day. Despite having run poorly on his last few runs, Gladstone was in the betting and the reasons could not been on his form. The conviction of those who backed the gelding proved spot on as Gladstone, ridden by jockey Irvan Singh, showed a clean pair of heels at the business end after chasing Baywatch Babe into the straight.

Gladstone was off speeding ahead showing renewed zest and stole a march early in the straight. Favourite Sublime was taking too long to warm up and when she did, it was way too late. Mahira, in fact, improved nicely in the final furlong to get past Sublime and finish second behind Gladstone.

For the professionals, jockey Suraj Narredu was the star f the day scoring an impressive four winners.