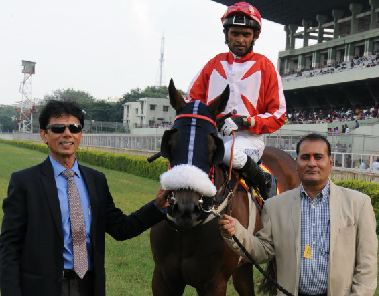 Laxman Singh trained Isabella (Excellent Art – Messalina) has made it a habit to claw back stronger after a defeat and this time she dished out her best and broke the course record for 1400 meters. She was raring to go alright but waited for the right time to step on it, staying close behind the front-runners all through the backstretch. Highly Acclaimed and Rahil disputed the lead as they kept outdoing one another in the early stages with Moondancer and Isabella keeping each other company until the turn. Phenomenal Cruise missed the trick as he fell back to trail by three to four lengths for over half the trip with only Starlight behind him.

Highly Acclaimed showed glimpses of a return to form when he surged ahead to grab the lead. Isabelle broke free and worked up scorching pace and the moment she quickened, it was all over. Isabella, with Neeraj Rawal in the saddle, whizzed past Highly Acclaimed with ease and stretched out fluently to run away from the rest. She finished on brilliantly and clocked a breezy 1:23:84 bettering the timing of 1:25:19 set by Plenipotent six years ago. Phenomenal Cruise arrived with a good but late burst to finish second, two lengths adrift of the winner. Highly Acclaimed ended a length further back.

Trainer Deshmukh’s ward Actually (Royal Gladiator – Antilia) scored a clinical victory this time scoring her third victory for the season and earning a good long rest. She was off to a good start and lead the tightly packed field all the way. She had a bunch of horses snapping at her tail in the straight, but apprentice jockey Surya Prakash focused on the task at hand and pushed and urged the mare with a single-minded determination. Avantika, Raajneeti, Treasure Striker were all right up close, but Actually galloped on merrily to outpace them all and score probably her best win to date. Avantika ended runner up, while Treasure Striker saved the place money.

Money back favourite Vijays Singham (Leitir Mor – Zarandja) showed out early in the straight and piled on a sizable lead early in the homestretch to win comfortably. Early leader Wah Ms Zara tried the runaway tactics while leading by over four lengths in the straight, however, Vijays Singham devoured ground briskly and was darting away past the 300 at a good clip. Reno Star tried hard to stay in contention, but found the winner too good. Vijays Singham won easing up in the hands of ace jockey Suraj Narredu. Reno Star ended just a length behind, beating Wah Ms Zara by over five lengths for the runner-up berth.

Strategist (Multidimensional – Dazzling Skill) was another hot favourite to post a handsome victory providing jockey Suraj Narredu his second of three wins for the day. The Sequeira trainee settled in third behind Secret Command and Kimberly Cruise until into the homestretch. Kimberly Cruise had barely taken charge when Strategist arrived with a good burst of speed. He floored his rivals at that very moment and sped away showing commendable acceleration without really getting fully fired up. He sailed away to win by over three lengths and was truly superior to the bunch. Alliston edged out Top Saga for the second slot; Kimberly Cruise probably was dazed by the winner’s dazzle, hence ended a tame fourth.

Lightning Fin (Green Coast – Finfoot) ran the fastest race of her career and created a flutter by lingering on all the way past the post. There was no doubting on her speed quotient as she was up and early more often than not and none thought much of it when she led the field into the homestretch. The younger ‘mean machines’ namely Agni, Zamora and Celeritas, were struggling to stay afloat as jockey Rafique goaded trainer D Netto’s ward all the way. Lightning Fin held on to her lead when another outsider, Rapid Fire finished on full of steam. Lightning Fin won by ¼ of a length from Rapid Fire, while Zamora ended a fair third. Favourite Agni and Celeritas both ran below par and ought to pick up sooner than later.

Kionia (Arazan – Freefall) saddled by trainer L D’Silva, produced a neat start to finish victory, her second for the season. Silver Set stuck by Kionia right from the start and little separated the two as they turned for home. The pair raced ahead of the rest with Kionia a shade ahead and Silver Set in hot pursuit trying hard to get at the leader. Kionia rallied well in the final 100 meters and had enough reserves to stretch out nicely and score a convincing victory, finishing just under two lengths ahead of Silver Set. Favourite Blue Empress who looked in contention as she was a close third when they entered the straight, did not raise a gallop and ended in the rut. Dimension improved positions to take the third spot.

Jockey Suraj Narredu capped the day with another fluent victory partnering trainer Sequeira’s Sarvatra (Surfrider – Agility) to an emphatic win. This one was a no-contest and once Sarvatra, who was the prime fancy, got going, she left the rest panting to win by more than four lengths. On My Way finished well to take the second spot comfortably ahead of Freedom Fire.

For the professionals, jockey Suraj Narredu was the star of the day yet again, scoring a fine treble. Trainers Laxman Singh and RH Sequeira saddled a double each.