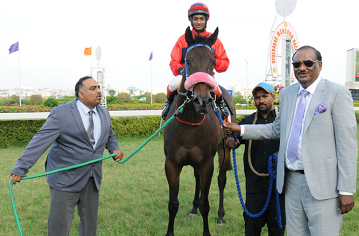 Second in demand Smashing Blue (Win Legend – Twice Over) saddled by trainer Sequeira, and the prime fancy Ashwa Virrat fought a long battle that started right from the gates and went on all the way to the winning post. These two showed early that they were far better prepared than the rest in the race for two-year-old rookies vying for the Dodla Pratap Chander Reddy Memorial Million, he feature race of the day.

They were stuck together at the jump with Smashing Blue, ridden by Akshay Kumar enjoying a slight upper hand over Ashwa Virrat was up on her outside. The rest followed a few lengths behind all the way into the straight. Both Akshay and Suraj put their heads down and rode out hard in an all-out effort. Smashing Blue looked solid as she galloped straight as an arrow parallel to the rails showing a good level of maturity for a first start and that held her in good stead. Ashwa Virrat need not be too disappointed as he matched-up alright and fought gallantly all the way to the wire; he came under slight pressure perhaps, in the run-up to the post, as he shifted out ever so slightly in the last few strides. Well, that couldn’t have cost too him much as Smashing Blue held on decisively to claim the race by half a length. Akashima improved to finish third but was a good distance away from the top two.

The final day of the season began with a flutter in the first race with 20 to 1 shot New Comer (Ontario – Kalimanka) causing an big upset. The field was reduced to six with Et Voici and Diesis Dream hogging most of the betting.

New Comer led the field into the straight and marched on. Diesis Dream and Et Voici were on his heals all the while but neither could topple the rank outsider from trainer Sateesh’s yard. Jockey Nakhat Singh rode out vigorously all the way and New Comer managed to hold on to win by just under one length. Et Voici edged out Diesis Dream by a head to snatch the runner-up berth.

Deshmukh’s Lightning Bolt (Excellent Art – Shamaal) was the one of the two first favourites to oblige on the day and jockey Zervan guided the colt to a pleasing win, his second in three starts. Lightning Bolt improved to second as Victory Parade led them into the straight. Zervan had to work hard to draw level with Victory Parade who put up stiff resistance until the last 100 meters. Lightning Bolt wore the challenger down in the final run to surge ahead and score a comfortable victory in the end. Exclusive Blue progressed well in the straight to save the place money.

Once More (Lord Admiral – Joriki) signed off in style beating a competitive field comprehensively. While winner spotting was still a poser inside the final 400 meters, Once More was probably not one among the reckoning as she was way behind those grappling for the lead out in front. Story Teller was in the lead and started to drift out, taking Crimson Fire with him. Along the rails, Brush The Sky looking hopeful to land it. Alta Vita and Barnabas were fighting to stay in contention, which is when young apprentice Jitendra Singh was assessing the situation in front. He quickly corrected course seeing the wide gap on his right and swung into action. Once More responded instantly and produced a fiery turn of foot to rocket ahead in the final furlong, leaving the rest in a tizzy. The Sateesh trained filly stormed in to win by four lengths knocking the wind off the sails of her rivals. Brush The Sky ended second just ahead of Crimson Fire, while Story Teller filled up the frame.

One One One (Win Legend – Refreshing) justified the strong support he enjoyed and scored with a measure of comfort. One One One settled in third spot behind the front running pair of Mr Baahubali and Super Dart who were a good four lengths ahead. Akshay Kumar made his move soon on entering the straight and urged the Sequeira trainee forward. It didn’t take too long for One One One to take charge and once he did, he accelerated well to dash away from the rest with ease. Ashwa Bahula ran on to finish a tame second finishing more than two lengths behind the winner. Mr Baahubali held on narrowly to the third place from Super Dart.

Top Contender (Top Class – Mizzna) saddled by Shehzad Abbas, won the concluding race of the season with a determined effort that came late, at the business end of the race. On The Fire shaped well when he took charge from the tiring Composure. Then began the scramble from the back as Vijay’s Empire, Top Contender and Patron Saint started to eat up ground at a brisk rate. However, in the final 100 meters, it was all Top Contender who picked up scorching speed to seal the issue a stride or two from the winning post. Top Contender, Vijay’s Empire, On The Fire and Patron Saint finished almost abreast within half a length as they flashed past the post in a thrilling four way finish.

Trainer Laxman Singh and jockey Akshay Kumar logged the highest number of winners and returned as the champion professionals for the Hyderabad Monsoon season 2019.