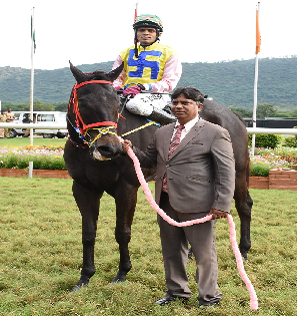 Leading  trainer Arjun Mangalorkar and top pro S John reigned supreme in the Mysore season. Arjun a trifle unlucky in the classics, be it at Mysore or Hyderabad  topped the list of trainers at Mysore, signing off with Spanish Beauty who after a couple of failures early on in the season earned her corn bill on the concluding day, winning the K Thammanna Gowda Memorial Trophy in the hands of Imran Chisty.

Animal Queen from Rajesh Narredu's yard on the strength of her facile victory in her last start was fancied most but in this no whip race, it was Spanish Beauty who produced a winning gallop in the final furlong to gain the day snuffing out the belated challenge of the topweighted Coorg Regiment while the on-money favourite Animal Queen piloted by John finished a tame third. Now that Spanish Beauty has resumed her winning ways, she is set to add a couple of more wins to her kitty in the forthcoming Bangalore winter season.

Like Animal Queen, Order Order from trainer Rakesh's yard garnered the maximum support in the Alekona Trophy run over a mile on the strength of his impressive showing over a mile-and-half trip, finishing second behind the moody Velocidad in her last essay. She too failed to justify her top billing finishing off the frame. The in-form All In from the stables of Sharavanan registered  a hat-trick, cruising home to the delight of his supporters. Last start winner Brabourne despite losing a couple of lengths at the gates did well to finish second ahead of Siddhani while Thea's Gift completed the frame.

The Mohd.Khan-trained Haedi's Folly and the Dominic schooled Castaway topped the betting board in the M K Srinivas Memorial Trophy run over a sprint. The former who was in no mood to enter the starting stall was withdrawn while the latter was never in the hunt and came back blame. Lesser fancied Cyclone who had let down large following in his last essay produced his best in the hands of Umesh to score in emphatic fashion. The consistent Star Of Thea finished a game second ahead of Super Success while Mint came home fourth.

Habanero was another Dominic ward who failed to deliver in the upper division of the Nugu Dam Plate run over a sprint. The public choice after posting a fine win in his last start failed to keep pace and eventually finished in the ruck. Maybe Forever who was strongly fancied, backed down from (7/1) to (7/2) justified the confidence of his supporters edging out Stari Grad close home. Prashant Dhebe who was engaged to partner Star Grad was replaced by Darshan after Dhebe suffered a bad fall in an earlier event resulting in a fracture of his thigh bone. Be Bold caught the eye while finishing third ahead of Sufficient Proof and is one for the note book.

Finally the S M Jhonson grey Veni Vidi Vici entered the winners circle this season. The eight-year-old after a series of below par efforts when fancied strongly by the stable came good on the final day, warming up in time to peg back the effort of Country's Power close home. T S Jodha who partnered Veni Vidi Vici earlier booted home a ten to one shot Prince Azeem from M R Singh's yard in the lower division of the Nugu Dam Plate to record a double.

Lokanath Gowda-trained Lightning Attack who failed to display his true potential in the concluding event on the Derby day came good in the upper division of the Mulki Plate. The winner piloted by apprentice Chetan Gowda effortlessly beat the overwhelming favourite Nostradamus and Star Lagoon while sending out a message thata he will make his presence felt in the higher class in the winter season. The lower division of the Mulki Plate was claimed by the second in demand at the betting ring Desert Gilt.

The S M Johnson schooled Classic Jewel who failed to bring off a coup on Derby eve made ample amends in the hands of Amyn Merchant. The winner was again backed to the exclusion of her 11 rivals in the Kasargod Plate and this time out Classic Jewel made no mistake landing the spoils.Naval Wrestler surprised most gaining the runner-up berth ahead of Carnival Express while Swiss Admiral who too had his fair share of supporters missed the kick and was out of the race.