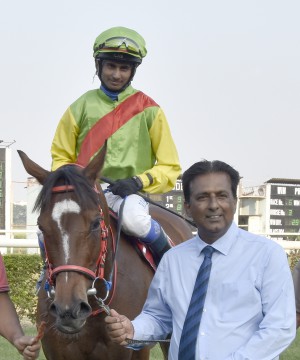 The opening day’s races at RCTC saw jockey Hindu Singh hit pay dirt with a fluent quadruple while champion trainer Vijay Singh was his usual business-like self with a popular treble. In the absence of jockey Nikhil Naidu, Hindu Singh got two chance rides atop Vijay’s wards Gaurish and Valeria, and made no mistake on both occasions. The James Mckeown duo of Alpheratz and Viareggio added to his impressive tally.

The day’s main event, The Bullet Cup, saw Vijay Singh-trained Jacobin being given a very clever ride by apprentice RS Bhati to land the spoils from Reincarnation who had stolen a march in the straight. Lying fifth of nine till the top of the straight, Jacobin exploited a gap along the rails to move with giant strides in the final furlong and sail past Reincarnation who had collared the favourite After Shock without too much trouble.

The afternoon commenced with a regulation victory for Gaurish who made every post a winning one in the Moon Mission Handicap. Surf Romance and Glorious Leaps occupied the minor berths. Jockey Christopher Alford rode a great finish astride San Remo but fell short by the proverbial whisker to get the better of the 4/1 favourite Sharavati in the sprint for the Galashiels Handicap. Dhanu Singh Deora extricated that extra ounce of strength from the Arti Doctor ward to bring home the bacon. Nail biting stuff that ended in joy for a majority of punters.

The gross debacle of piping hot public choice Abenaki in the race for the Piato Handicap was something of a setback or punters. Second favourite Starofhollywood was the fancy of many but she had no answer to Jasbir Singh-trained Modification with Rupal Singh in the saddle. James Mckeown came back with a bang as his 8/1 shot Alpheratz made every post a winning one in the race for the Love Is Blind Handicap. Kimaya and Fancourt followed the winner home and finished close up. Jockey Imran Chisty on public choice Kimaya had the disappointment of another runner-up finish while astride Topnotch on the Annella Handicap. However, it was admirable that the connections decided to race the second favourite up front. Though he went down to Vijay’s filly Valeria, this forward run is sure to stand him in good stead in the near future. Valeria was ridden well of the pace and moved with telling strides in the straight. This run brings her into reckoning for the 1000 Guineas later this month.

Mckeown continued his good work by bringing the curtain down on the day’s proceedings with the filly Viareggio. The comprehensive defeat of the public choice Abhya Gama was a bit of a shock for homeward bound punters who had enjoyed a fairly lucrative day till then.