ANJEZE WINS 1000 GUINEAS IN A THRILLER 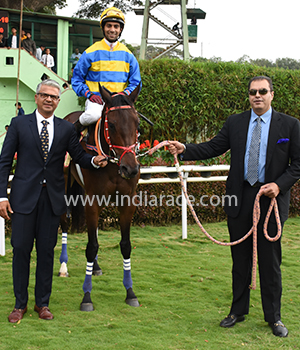 Back after a injury he sustained at Mysore, leading pro Trevor Patel who failed to strike on Friday produced his best on the lesser fancied Anjeze to win the first classic of the season, the Bangalore 1000 Guineas in a thriller from the Parvati Byramji schooled Gift Of Grace. The second in demand at the betting ring, Gift Of Grace piloted by young Irish pro David Egan had assumed command at the top of the straight and looked set to provide the lady trainer a classic success before Trevor packed punch on the Sulaiman Attaollahi schooled Anjeze and Scottish pro David Allan got busy  on the even-money favourite Well Connected. Gift Of Grace in no mood to give up was locked in a ding-dong battle with Anjeze in the final 100 metres before the Win Legend out of Angelique star performer Anjeze from the Dashmesh Stud farm reigned supreme in the final few strides. The classic finish now really opens the classic scene and the forthcoming classics in Mumbai, Chennai and Kolkata will generate maximum interest.

Earlier, Zhu Zhu Zest floored the followers of form in the opening event, the lower division of the Mount Joy Plate. The 10 to one long shot in the hands of Ryan Marshall despite being drawn badly (14) took a superb jump and quickly led the field and never let the initiative slip to romp home a convincing winner. Queen Of Sands from trainer Imtiaz Khan's yard who garnered maximum support finished second ahead of the topweighted Aferpi while Sainthood made the frame.

Unifier from trainer Irfan Ghatala's yard was touted as a good bet by most pundits and the stable connections. Dallas from Samar Singh's yard too had a fair share of her supporters, but was withdrawn before coming under the starter's flag. Queen Isabella from Faraz Arshad's yard hit the front for most part of the sprint trip before the other Isabella (Lucky) took charge at the distance post and then effortlessly put the issue beyond doubt in the final furlong. Winning Force did well to gain the runner-up berth ahead of Girl With Pearl while Unifier after being favourably placed at the top of the straight failed to raise a winning gallop and eventually failed to make the board.

The topweighted Silver Eclipse was fancied most in the Hebbe Falls Plate run over a mile. The favourite despite being forcefully piloted by T S Jodha failed to beat another 10 to one shot Je Ne Sais Quoi from Darius Byramji's yard, who made every post a winning one in the hands of Irvan Singh. Silver Eclipse `nosed' out Turf Prospector to finish second while Proudwish completed the frame.

After Unifier bit the dust in the second race, the supporters of Irfan Ghatala recovered their losses, betting big on the on-money favourite Bernardini in the in the Bold Majesty Plate run over a distance of seven furlongs. The winner was backed to the exclusion of his 13 rivals, offered at (90/100), while the second favourite Galvarino was quoted at (7/1). It was Galvarino piloted by Imran Chisty who hit the front and dictated the proceedings for most part of the journey before John guiding the fortunes of Bernardini after tracking Galvarino and Kimera reminded the public rage of the task ahead and Bernardini responding gamely to his master's call shot through to score without being unduly extended. Last start winner at Mysore, Grey Channel finished on purposefully at end to take the second spot ahead of Galvarino while Venus Bay after gracing the wrong end of the field caught the eye finishing a suggestive fourth.

The principal added attraction, the Hoysala Trophy produced a pulsating finish, three horses including the favourite Cosmos locked in a close battle before the lesser fancied Australis from Satish Narredu's gained the day by the shortest of margins from Mystic Flame and Cosmos. The winner piloted by Trevor Patel was a trifle lucky as Irvan Singh astride Mystic Flame shifted in at a crucial juncture and hampered Cosmos and this was enough for Australis to get home first ahead of the two Byramjis wards.

Indian Democrat from trainer Padmanabhan's yard and Invicta from the stables of Prasanna Kumar were fancied most in the upper division of the Mount Joy Plate. While Indian Democrat produced a neat effort to enter the winners' circle, Invicta back after a long-layoff failed to make an impression and eventually finished in the ruck. The winner piloted by Sandesh tracked the nohoper Sandarina before Sandesh pushed him in front at the top of the straight and the Padmanabhan ward who looked a picture of fitness at the parade ring galloped home without Sandesh needing to raise a sweat. Mariachi finished second ahead of Genuine Star who surprised most gaining a place verdict.

Royal Resolution shocked the followers of form in the concluding event, the upper division of the Hornadu Plate run over a sprint. Whizzo back after a 17-month break was the top fancy, but the public choice after raising hopes at the top of the straight failed to overhaul the leader and only managed to finish second ahead of Power Of Shambala. The winner helped Padmanabhan record a double after the disappointment of Well Connected in the 1000 Guineas.