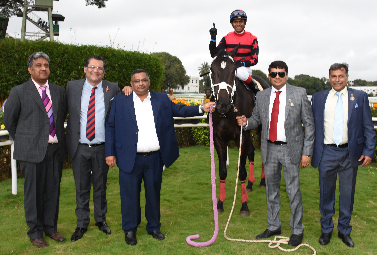 There were no surprises in the second classic of the season. The best horse in the campus War Hammer who had remained unbeaten from his five earlier starts won the 2000 Guineas, his second classic success in resplendent style. Suraj Narredu astride the public rage confidently tucked the Prasanna Kumar schooled War Hammer in the last berth in the small four-horse field as Northern Alliance piloted by David Allan hit the front and set a decent pace all through the mile long trip. Colm O'Donoghue guiding the fortunes of Mysore Derby winner Sourthern Ruler joined the issue with Northern Alliance at the distance post while Suraj was busy packing punch on War Hammer. The winner readily stormed into contention in the final furlong and then whizzed past his two arch rivals to register his sixth straight victory. Northern Alliance held on to take the runner-up berth ahead of Southern Ruler.

Earlier, the Faraz Arshad-trained Debonair, the top fancy in the opening event, the Gulbarga Plate run over 1100M dash, made every post a winning one in the hands of Imran Khan. The well supported favourite who looked a picture of fitness at the parade ring smoothly hit the front and never let the initiative slip romping home in effortless style. Kanthaka did well to gain the runner-up berth ahead of Air Force One while Love Music filled the frame.

The next event, the Mekedatu Plate run over a distance of 2000 metres saw another on-money favourite Cosmos from trainer Darius Byramji's yard confidently piloted by Suraj Narredu prove too good for his four rivals, assuming command at the distance post and cantering home without unduly being extended. Velocidad finished second ahead of Corybantic while Indian Pharaoh who has lost form finished a poor fourth.

The Prasanna Kumar-trained Roma Victor garnered the maximum support in the S V Subramaniam Memorial Trophy run over a sprint. Last start winner Mega Ikon from Inayathullah's yard too had fair share of supporters. But the top fancies flopped badly and failed to make the board. The Pradeep Annaiah schooled Kvasir dropped the biggest bombshell in this event winning in the hands of new apprentice Arul from the late finishing Akita Pro. Silver Dew who was prominently placed and was fighting for the top spot had to rest content with the third spot ahead of Spanish Beauty. The winner appears in good nick and it will pay to follow him again when next saddled.

The principal added attraction, the Air Force Cup was claimed by the second in demand at the betting ring Three Wishes brilliantly piloted by Colm O'Donoghue. The top `Knight' tracked the leader Casey for most part of the mile long trip before packing punch on Three Wishes approaching the distance post. The winner responding gamely to his master's call streaked ahead and held on the game challenge of the favourite Marco Polo. Casey finished third ahead of Spirit Bruce who is the one to watch out for in the weeks ahead.

The Kentucky Stakes run over a sprint produced a pulsating finish, four horses flashing past the post in a humdinger before the ten to one shot Aachen gained the day by the shortest of margins from the favourite Cavaliere, Musterion and Asgardia. The winner piloted by Umesh looks a goodtype and more will be heard of this Irfan Ghatala ward in the months ahead.

The concluding event, the Krishna Raja Sagara Plate produced a shoxck result, Aleef from Mohd Khan's yard edging out another long shot Back Of Beyond close home, the winner piloted by A H Vishwanath, who won a race after many many years. Favourite Honey Trap finished third ahead of Adios.