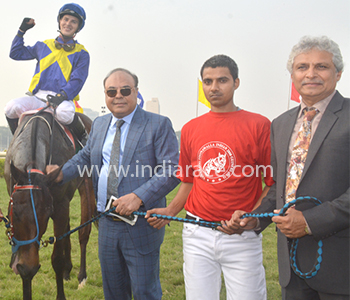 Trouvaille (Surfrider – Highly Fashionable, Ruia Stud) showed off his fighting qualities and came up trumps winning the Villoo Poonawalla Indian 2000 Guineas (Gr1) in a thrilling finish. One's heart went to Alexei; his effort too was brilliant and a dead-heat would have been a just result. But then, such poetic justice is rare and the winner-take-it-all factor is what makes the glory a lot more spectacular. Trouvaille's win was indeed spectacular!

Both, the winner and the runner-up, or shall we say the winner and the near-winner, were at the wrong end of the field all through the major part of the race. The spotlight has hogged by Wizard of Stocks and the tote favourite Knight Templar until into the straight. The next line of runners comprised of Royal Crystal, Kildare, Sultan Suleiman and Victorious Sermon as they turned for home.

While Wizard of Stocks kept galloping trying hard to hold on to the lead, Knight Templar was struggling to get going. Alexei slipped in through the rails and found her way through the bunch accounting for the fancied lot and progressing with every stride.

Jockey Nicky Mackay took the safer route from the outside and started to goad Trouvaille to fire up for the finish. Trouvaille responded well and got past the fighting bunch with ease, however, Alexei was still well ahead. Trouvaille and Nicky Mackey started to claw there way, closing in at a good rate. Alexei too was firing on all cylinders and kept his hopes alive until the very last stride. However, the Sunderji trained Trouvaille had the fire-power and the guiding force in the saddle to hit the wire first amidst loud cheer from the large crowd, loud enough to bring the roof down, as they say. Commentator Deepak Rajpal's excitement was obvious in the manner he screamed “Trouvaille” at high decibels and he quickly added “and Alexei in a nail-biting finish” which best described the finish! These are the kind of finishes that makes horseracing so enjoyable and Classics are truly a different ball game with so much at stake. Trouvaille was the hero and Alexei a gallant runner-up. Knight Templar did well to end third as did Wizard of Stocks who ended a good fourth.

For trainer Sunderji and jockey Nicky Mackay the signs were auspicious right from earlier in the day. Sunderji struck in the second race of the day with favourite Galloping Goldmine (Arazan – Messaline, Poonawalla Stud) putting in a power-packed finish to clinch the Gulamhusien Essaji Trophy. Jockey David Egan guided the gelding home to his second win from five starts. Dumas had the upper hand coming into the straight, but could not sustain well enough to build on the handy lead he had approaching the distance post. Tudor Hall was the first to challenge Dumas and the pair was fighting stride for stride when Galloping Goldmine arrived with a blazing gallop. Neither had any answer to the challenge that Galloping Goldmine posted at the business end of the race. Galloping Goldmine, the prime favourite joined and flashed past the fighting duo to win comfortably. Tudor Hall edged out Dumas for the runner-up berth.

Suderji and Mackay teamed up with debutante Air Blast (Air Support – Sabre Dance, Kunigal Stud) who probably is aptly named as he displayed raw speed in the final furlong to floor all and sundry with a commendable blast-off.

Rising Sun shaped well as he easily got past the front runners and also established a handy lead. With those close behind struggling to keep up, Rising Sun looked on course to kick on. Air Blast took off soon on entering the homestretch and covered ground at a scorching pace to collar Rising Sun in the final 100 and then romp home to win in an impressive fashion. He looked the winner the moment he picked up speed and was clearly the fastest in the homestretch. Rising Sun hung on to the second place from the fast finishing Panse'e.

Trevor too began the day with a back-to-back double winning the first two races, but luck eventually deserted him in the Guineas. He rode Pesi Shroff trained Del Mar (Phoenix Tower – Alumina, Manjri Stud) to a dramatic last stride win, thrilling the large number of backer no end. It looked a hopeless case for Del Mar when Hidden Gold got past leader God's Decree early in the straight and then sped away to post a good lead approaching the distance post. Del Mar was not sighted until he moved out. He was a bit erratic too swaying in and out and not keeping a straight course. He however, recovered quickly and arrived with a dazzling finish to pip Hidden Gold on the post. The timing of his finish could not have been better. Luminosity ended a fair third.

Trevor was crafty on Castilian (Power – Oyster Reef, Nanoli Stud) as well and created an upset while beating hot favourite Headway with ease. Headway was on a start to finish mission and looked on course too. He entered the homestretch with a decent lead and was kicking on well until into the final furlong. Castilian caught up with Headway and zipped past easily to shock the favourite. Sassy Lass added insult to injury as she beat Headway for the second place.

Imtiaz Sait's Flying Visit (China Visit – Ooh Ahh Camera, Usha Stud) scored an inspiring victory in a small but tough field with surprising ease. Pure Zinc, who had an impressive win under his belt in Pune, led them into the straight, but fell aside without offering any resistance as Flying Visit dominated a good part of the homestretch. Flying Visit won by a comfortable two lengths with jockey Sandesh needing to hustle his too much. Roberta ended a tame third.

Antarctica (Chevalier – Wild Anzille, Ruia Stud) was bullish in his finish and he did bulldoze all and sundry with a slightly wayward but powerful finishing run. The race got serious when the no-hopers faded out and Royal Ace, Adams Beginnings and Highland Woods were engaged in a three way battle with a furlong to go. Antarctica picked up speed and was catching up with the trio and a brisk rate. Jockey Bhawani Singh had trouble keeping the Altamash ward from drifting…but eventually got her to go fast enough to win comfortably despite ending up too close to the outer railing. Highland Woods was a good second, while Adams Beginning saved place money.