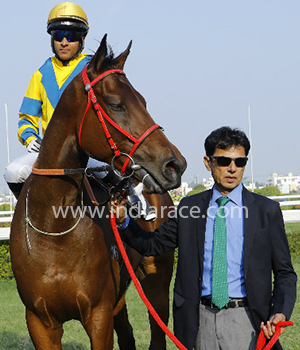 Beyond Limits (Tazahum – Magical Night) made ample amends for his last start loss to Ayur Shakti and romped home in a convincing manner to oblige his large followers. He was some distance behind early leader Mind Reader, who was closely followed by Artistryy and Pentagon until into the straight. Jockey Ashhad Asbar made his move early around the 800 meter mark and bridged the gap without taking anything out the Laxman Singh trained gelding and was in apt position in the small field as they turned for home. Mind Reader held on to the lead past the 400 m mark but had Artistryy threatening to snatch it away. Pentagon was working hard to stay in contention but was not making much headway. Beyond Limits arrived with a big finishing gallop and the moment he caught up with those in front, it was clear he would give them a sound trashing. He stepped up momentum and flashed past the trio and then stretch away to win by a good margin. Artstryy ran on to beat Mind Reader for the second place.

Top Contender, Scooby Dooby Doo and Shandaar garnered most of the betting and it the last named that delighted those who backed him at nourishing odds. Shaandar, saddled by Ravindra Singh was in the bid-bunch for most of the time, while Top Contender disputed the lead with Prince Caspian right from the star.

Once into the straight, Top Contender pushed ahead and looked good while stretching away from his companion. Shandaar (Lord Admiral – Duchess of Yore) started to draw closer and challenge Top Contender with a furlong to go. The pair battled hard, but Shandaar was finishing a lot faster and eventually pulled it off by a narrow margin. Top Contender fought well and returned a good second. Prince Caspian ended a tame third.

Lombardy (Leitir Moi – Lombardia) expressed herself beautifully on her debut run itself scoring a facile victory in the opening race of the day. Jockey Nathan Evans made a nice quick move from the gates to settle behind Aintree the main rival in the race. True to the market trends these two fillies were far superior to the other runners. Aintree tried hard to stay by Lombardy and fought well until the distance post. Lombardy took a while but when she warmed up, Nathan Evans urged her on and she began to pull away from Aintree. Lombardy won by over three lengths leaving Aintree behind; Royal Romance improved positions, yet finished a faraway third.

Mahashakti (Speaking of Which – Allaire) has been improving her podium position with each run, from fourth on debut to third and second in her subsequent two outings. On that trend, a win was on the call. She did just that and notched up her maiden victory with a powerful and determined finish. Sitting right up in second and just behind Let It Be me, jockey Ashhad Asbar made the bold move of sailing into the lead early. He had the long Hyderabad straight to sustain and with favourite Exclusive Art and Gazebo in close vicinity, it looked like Mahashakti had a task on hand. However, Exclusive Art failed to quicken and could not make any headway. Gazebo made a hard charge but just when it looked he would put up a game challenge, Mahashakti sped further away to return a clear winner. Gazebo ended a decent second, well ahead of Minnelli and Exclusive Art.

Sequeira’s Kesariya Balam (Knight’s Tour – Brindisi) was the shortest priced favourite of the day and won in a manner deserving of such support and conviction. He picked up after galloping leisurely until the turn and once in the straight, he pounced on the front runner and a couple of cracks got him zipping ahead and drawing away from the field. He looked the winner long way from home and compiled a facile victory winning with a margin of five lengths in the hands of jockey Akshay Kumar. Royal Treat held on to finish runner-up from the late finishing Lancashire.

Ashka Ashka Ashka (Win Legend – Masquenada) saddled by Robin Reddy produced a fiery finish and pulled away from a line of five horses crossing the 400m mark together. Royal Green, Digger, Vancouver, Askha Ashka Ashka and Marina Del Rey barged into the final two furlong rubbing shoulders and when they got going for the business end, Ashka Ashka Ashka accelerated the fastest to stretch away fluently and score by two lengths. Marina Del Rey tried to match strides with the winner, but just could not be fast enough and had to settle for the second spot. Vancouver and Digger took the other slots in the frame.

Mr Shanghai (West Virginia – Shanghai Girl) got the bobbing of the heads right making the last race of the day the most exciting. Sublime had just managed to get the measure of Darshish and was hoping to kill it when Mr Shanghai arrived with a spirited burst. It was too close a call, but the never-say-die effort of jockey Rohit Kumar paid off as Mr Shanghai nailed it on the last stride to shock Sublime on the post. His Excellency, finished on fastest of the lot, the top two included, but got her timing all wrong and had to be content to take the third place for a really scorching run in the final 100 meters. Darshish took the fourth place and the margin for the top four finishers was less than a length!

For the professionals, trainers Ravindra Sing and Robin Reddy saddled a double each, while jockeys Asshad Asbar and Akshay Kumar scored a double each.