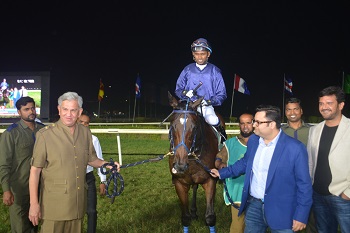 Augustus Caesar (Holy Roman Emperor – Snowy Day In La, Equus Stud) put in a sustained gallop in the final furlong to collar favourite Golden Guest closer home and strike it rich while winning the PD Bolton Trophy the feature event of the day. The field of five raced in a close bunch right from the start and finished so as well.

Golden Guest took off quickly from the gates and had Silver Flames and Sharareh right behind, with Augustus Caesar and Excellent Gold just over a length further back. Golden Guest shaped well on entering the homestretch and galloped at a good clip. Silver Flames just could not wriggle out as Sharareh left him no room to manoeuvre to get a clear run at that crucial juncture. No such issues for Augustus Caesar as jockey Neeraj Rawal timed his finish perfectly and the Altamash Ahmed trainee picked up speed coming into the final furlong and eventually wore down the favourite to snatch the lead a stride or two from the winning post. Augustus Caesar won by half a length; Golden Guest did well and ended good second.

Trainer SK Sunderji and jockey Nicky Mackey stretched their good run of last week and picked up two important races in the day. They first struck with hot favourite Revelator (Chinese Whisper – Martinique, Tohna Stud) who won as he liked, compiling a second impressive win after his runaway victory in Pune.  Revelator had it easy all the way as he settled in third initially and once they entered the homestretch, he zipped last early leader Gold Member and Beemer to steam ahead in a trice and win with a big margin without encountering any threat. Revelator could win again in the kind of form he is in at the moment. Beemer ended a tame third ahead of Martini.

The Sunderji-Mackey combine scored again with Chephirah (Varenar – Ajaweed, Equus Stud) winning a thriller. Favourite Copper Queen darted into the lead soon on start and maintained a handy lead right through until well into the straight. Warrior Can who chased the leader right through, started to make his bid midway down the straight. Chephirah who was not in the picture until then came alive just in time at the business end. Warrior Clan was galloping hard to get past Copper Queen and was facing stiff resistance from the favourite. It was all over in a flash with Chephirah swooping down on the fighting pair and pip them on the post in an exciting three-way finish. Warrior Clan failed to nail it by a very narrow margin. Copper Queen saw her chances go up in smoke after a steady effort until she was collard a couple of strides from the winning post.

Dallas Todywalla trained Rainbow Trout (Leitir Mor – Rainbow Queen, Poonawalla Stud) picked up her third win in five starts bagging the Edgar Desylva Trophy with a measure of comfort. Star Comrade and Western Front burnt themselves out vying for the lead and going at each other until into the straight. While Western Front kicked on to establish a sizable lead, Star Comrade faded away far too quickly. On-money favourite Sasakwa flopped badly and couldn’t raise a quality gallop at any stage. Rainbow Trout, ridden by CS Jodha, warmed up nicely to make his run in the final furlong and he accelerated aggressively to storm into the lead and draw away from the field. Till End of Time rallied well to finish second, while Sasakwa ended a disappointing third.

Memorable Memories (Saamidd – Celtic Memories, Hazara Stud) notched up her maiden win on her third start to win the Bangalore Turf Club Trophy in an impressive manner. She scored a clinical victory as she settled in third until into the straight and then accelerated fluently to sail away into the lead approaching the distance post and shut out the competition, sealing it a long way from home. Despacito rallied way too late and ended a tame second ahead of Monk.

Adhiraj Jodha trained Retained Asset (Sedgefield – Blue Ridges, Jai Govind Stud) who had been winless in the previous 16 starts found his feet to chalk out that much needed first win. He set about in chase after Saddle In The Wind took charge early in the straight and found his touch in the last 100 meters to quicken at the finish and claim his big reward. Saddle in the Wind ended a decent second while Chezza ran on the take the third spot.

Old warrior Isinit (Arabian Gulf – Soul Sister, Manjri Stud) saddled by SN Joshi, fought well to hold on from the late finishing Outstanding. Isinit took charge early in the straight and had Kalina on her haunches. Apprentice jockey Pranil put his head down and kept pushing his mount all the way. Isinit countered Kalina with ease but had Outstanding charging in at her in the final few strides. Pranil however, rode out with determination and carved out a narrow victory from Outstanding half a length away. Kalina, who was returning to competitive racing after a long layoff, did well to finish third and it may pay to follow her in her next outing.

For the professionals, trainer SK Sunderji and jockey Nicky Mackey scored a double each.