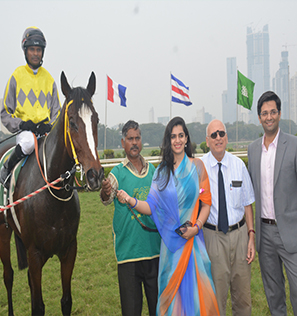 Jockey A Sandesh was in his elements gobbling up the first five races of the day. But for debutante Exotic Queen and to an extent Night Hunt who were clearly superior to the bunch they were up against, Sandesh lent his expertise in the saddle to ensure victories in the other three races  where there were those who put up game challenges.

Sandesh piloted the Adhiraj Jodha trained Tasawwur (Multidimensional – Transformation, Usha Stud) to a fine victory while beating favourite La Rondine who was in full flight, to claim the Maharaja Jiwajirao Scindia Trophy (Gr2), the feature event of the day.

Sacred Roman never looked assuring even though he had a good lead until the turn and sure enough although he tried hard to hang on, he was slipping in positions in the early half of the homestretch. Bronx did not quicken well enough when he should have as there was a gap he could make headway through, but he too took a while and had to pay the price. La Rondine made smooth progress and made a strong bid from the outside and even raced past Tasawwur and shaped well as she took charge with less than two furlongs to go. Sandesh had to fight his way through a rough passage and then mount his challenge. He hadn’t let La Rondine get too far and when he did get a clear run, Tasawwur responded with a strong finishing gallop to collar La Rondine with ease and carve out a comfortable victory. La Rondine was beaten convincingly and had to be content with the runner-up berth, while Bronx rallied after switching to the outside to just about beat Raees and Sacred Roman for the third.

Sandesh started his roll of five winners on the trot with Ron (Sedgefield – Saffron, Jai Govind Stud) saddled by Adhiraj Jodha in the day’s opening race. Ron took a while too to get going and had a bit of a leeway as Quail Hollow was fighting off Mikayla’s Pride who was putting up a stiff challenge. Ron was a bit erratic but Sandesh got him to focus on the task. Once he did, Ron gathered momentum and finished with a dazzle to beat the fighting duo with ease and notch up his maiden win. Mikayla’s Pride fought well to secure the runner-up berth while Quail Hollow ended a close third.

Exotic Queen (Leitir Mor – Star of Venus, Poonawalla Stud) was backed heavily and with conviction and the Faisal Abbas trained filly made a grand start to her career. She was cut above the rest and showed pleasing maturity with speed to match as she took off with Sandesh in the saddle showing her bit of dazzle to lead the rest comfortably right from the start. There was no rival worthy enough to even get close to her leave alone think of putting up a challenge. She won as she liked on her debut and has shown promise to achieve greater heights as she progresses. Feel Lucky ended a tame second ahead of Treasure Hunt.

Sandesh carved out a hard-fought and close win astride trainer Narendra Lagad’s En Sabah Nur (Diffident – Queen of Hearts, Poonawalla Stud) in the closest and most thrilling finish of the day. Impala darted into the lead at a cracking pace and En Sabah Nur was right up in second with the others racing close behind in a huddle.

Impala kicked on gamely once they were in the straight and had En Sabah Nur close behind. Favourite Storm Breaker started to move up places gradually and perhaps the top weight he was carrying proved to be too much. Impala and En Sabah Nur battled hard all the way to the wire and the bob of the head went in favour of the Sandesh ridden speedster. He won by a nose from Impala and Storm Breaker finished on to end a neck behind the runner up.

Sandesh had another easy win guiding Vishal Gaikwad trained Night Hunt (Net Whizz – A La Votre, Hazara Stud) who proved to be far too superior to the bunch of rivals. He settled in second behind Arabian Storm until the turn and soon took charge once they straightened up for home. Night Hunt began to devour ground briskly and was soon out of reach of the struggling lot. He looked the winner long way from home and compiled a big win with close to seven lengths to spare. Hudson’s horse ran on to take the second spot; Gandalf improve positions and did well to finish in the money.

Lion King (Win Legend – Sunshine Nell, Dashmesh Stud) saw a good gamble to a profitable end for his backers. Taking no chances, jockey Zeeshan drove the Shazaan Shah ward to the front and had a handy lead coming into the straight. With some aggressive whipping and pushing, Zeeshan ensured that Lion King stayed ahead all the way past the post. Mount Moriah laboured his way to take the runner up berth and ward off the late finishing Cray Cray.

For the professionals, jockey A Sandesh flexed his muscles right through the day falling one short of sweeping the six-race card clean picking up the first five races. Trainer Adhiraj Jodha chipped in with a double.