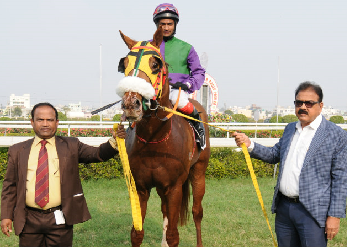 Both the divisions of the Mayor’s Cup saw an exciting finish and the fight went right up to the last stride. Agni (Burden of Proof – Auxiliary) the prime favourite had to use up all he had in reserve to pip long-time leader Mind Reader closer home.

King Maker led them into the straight and marched on ahead shaping well midway down the straight. Agni had the task of making up a good leeway and jockey Akshay Kumar did all he could to get the Netto ward to produce that final effort required. Agni started to respond and was inching closer with every straight, but with King Maker not showing signs of slowing down, the pressure was certainly on the favourite. Mind Reader meanwhile, was keen for the post as Agni started to breathe down his neck. Agni eventually nailed it on the last stride just managing to pip King Maker on the post. Asteria, who was nowhere close to the action, flew towards the finish and ended right alongside the top two finishers. Asteria is one to note.

Mon General (Arazan – Mauna Kea) ran a spirited start to finish race and had a bunch of horses snapping at his tail in the final finishing moments. Honest Hunter was the first to draw level with Mon General and the pair fought hard for a few strides. Mon General had barely accounted for Honest Hunter when he had a double-assault brewing with Super Dart and Warrior Supreme charging in with a late finish. Mon General however, had enough legs to see it through and he won by a neck to spare. Warrior Supreme was a tad too late and could only manage to pip Super Dart for the runner-up berth. Honest Hunter ended a close fourth.

Hassan’s Woodbridge (Win Legend – Premier Panache) put in a sustained gallop at the business end to claim the Hussain Sagar Cup in style. Rutilant led them into the straight and was kicking on gamely shaping well until Woodbridge arrived with a fast gallop. Jockey Nakhat Singh rode out well to collar Rutilant in the final furlong and then drive Woodbridge home to win by a comfortable margin. Rutilant finished a good second ahead of Hope is Eternal.

Hot favourite Conscious Gift (Speaking of Which – Brushed Aside) who had scored a facile win on debut not too long back, was given a real scare by lesser fancied Artemis Arrow and this race too went all the way to the wire, although the favourite had the upper hand in the final few strides.

Waitoma went into the led soon on start with Conscious Gift and Artemis Arrow racing together and these three did not let any other runner past them. Waitoma led them into the straight with a slender lead and soon had Conscious Gift ready to put up his challenge. Waitoma shifted in slightly cut across Artemis Arrow and that may have surprised the first timer who was right behind. Artemis Arrow seemed to have shied away and on hindsight, that may have cost her dearly.

Conscious Gift meanwhile, had raced ahead of Waitoma and was going all out towards the winning post. Artemis Arrow picked up her rhythm and arrived with rerun and with a good dash at that. She did give a scare to the favourite but Conscious Gift had just enough cushion to escape to victory by a neck. Artemis Arrow was a tad unfortunate for that brief occurrence that may have thrown her off gear for a crucial stride or two. Waitoma ended a tame third.

Rasika (Stern Opinion – Osprey Point) created a huge flutter and the long-shot returned the highest priced winner of the day. She spoiled the party for All Star General who looked right on course until shocked by the late burst that Rasika produced. All Star General had shot past early leader Silver Dollar and main rival Dillon approaching the distance post. Dillon drifted out badly and was out of the reckoning sooner than expected. All Star General did everything right and looked the winner inside the final furlong. Rasika found her touch after seven blank runs and arrived with a terrific burst to down the favourite by half length. Jockey Mukesh Kumar was seen urging the Robin Reddy ward long before they turned for home. But the filly showed a fiery dash towards the end to bring about her maiden win on her eighth start.

The last race too was won by higher priced City of Wisdom (Saamidd – Oluchi) saddled by Satyanarayana. Midnight Dream had just taken over from long-time leader Zamora in the straight when apprentice jockey Afroz Khan got City of Wisdom to accelerate. Midnight Dream fought hard to stay ahead, but City of Wisdom got stronger with his finish and soon sailed away to score by two lengths. Midnight Dream ended a fighting second although he could not stretch the fight closer home. City of Blossom finished a fair third.