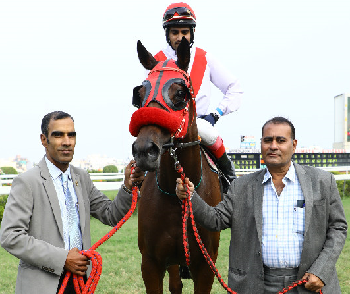 Ravinder Singh trained Vijay’s Empire (Princely Heir – Royal Tarton) was ridden hard by jockey Ajit Singh while carving out an exciting victory in a four-horse finish. Vancouver was in command coming into the straight and was galloping on to stay ahead.  Big Brave started to work his way closer with Vijay’s Empire and Kingswood close behind. Just as Big Brave got the measure of the leader, Vijay’s Empire started to throw in his challenge. Dandy Man got a rough passage, but that’s hardly an excuse as he had the chances to take available gaps but found himself in a rut. Sea Castle and NRI Heights too finished with a good dash and in the end when it mattered, Vijay’s Empire got the nod right to pip Brave Warrior on the post. NRI Heights snatched the third place from Sea Castle this one too just on the wire.

Hidden Hope (Excellent Art – Heiress) had a memorable debut winning the division one of the RCTC Plate with a measure of comfort. Sitting handy third until into the straight, hidden Hope, with Gopal Singh in the saddle, churned up a good pace inside the final two furlongs, picking up speed with every stride. She wore down long-time leader Lifetime with ease despite drifting out considerably in the final furlong. The Laxman Singh trainee was way too fast and won by more than three lengths beating his opponents easily. Lifetime held on from the fast finishing favourite Fashion Universe by a neck.

Trainer Hassan’s Super Act (Charmo – Waggamama) lived up to his name and fought well to score an exciting victory. Mind Reader led well and deep into the straight but weakened when put under pressure by Royal Girl. The way Royal Girl skipped away it looked like she would pull it off, but Super Act had other ideas. Jockey AA Vikrant lit him up in the final furlong and the gelding responded with a fiery burst of speed to get Royal Girl on the post. Super Act literally flew in the last part and did extremely well to win in the manner he did. Royal Girl was unlucky to have lost it so narrowly and on the last stride and a good effort went down for the girl. Alta Vita improved well to peg back Nova Scotia for the third place. Nova Scotia disappointed.

Hurricane (Green Coast – Destiny), saddled by Robin Reddy, was perhaps the most impressive winner of the day. He was way ahead leading right from the start and kicked on gamely once in the straight. He showed scorching speed all through in the hands of apprentice Abhay Singh and was out of reach of his rivals ravaging them just as his name suggests. He won by nearly five lengths making it a one-horse race. Loch Stella too could make no impact and had to be content with the runner up berth. Moka and Takisha ended close behind Loch Stella in that order.

Dumbledore (Stern Opinion – Beating the Buzz) worked his magic this time after a suggestive second last time out. He too won leading right from the start, with Southern Meteor in chase until into the straight. Dumbledore took off at a good clip there on and stretched out fluently to go out of bounds. He won by a almost eight lengths to spare.  Southern Meteor ended chasing the winner warding off Invasin and Negress Princess.

For the professionals, trainer SSF Hassan and jockey AA Vikrant scored a double each.