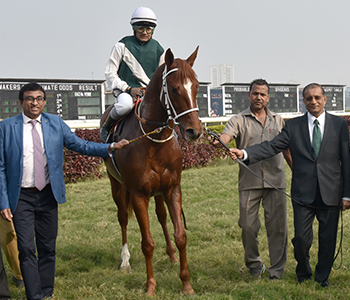 A piece of slipshod horsemanship by substitute jockey Hindu Singh astride Lesrel resulted in handing the Madras Race Club Cup in the Stewards’ Room  to Javed Khan-trained Perpetual Winning (Imran Chisty up) who had finished runner-up. Third placed rider DS Deora atop Brainstorm objected against Hindu Singh for causing severe interference near the distance post which caused him to check his mount and stumble as he was making his run along the rails. The objection was rightly upheld. With this win, the Javed-Chisty combo completed a double for the day, having won the Goodfellas Handicap with Dancing Lord earlier. The eight-year-old by Phoenix Tower out of Ovation moved up from the rear of the field with a fluent run to sail past front-running Bojangles in the straight.

Trainer Bharath Singh completed a brace too.  His Lumenac (Tazahum-Longoria) won the Robin Hood Handicap with apprentice Sujit Kumar Paswan astride. In this ‘No Whips’ race, the on-money public choice Ruby Cube with Suraj Narredu astride raced in mid-division for most part before finishing a close fourth. He is one for the notebook. Both apprentices Paswan and Rupal Singh did very well to finish first and second astride Lumenac and Dil Mange More respectively in a tight finish which also involved Eastside. Bharath then completed his double with Santana (Dashrath Singh up) who made every post of the Bookmakers’ Association Cup a winning one. The on-money favourite Waytogo chased him all the way but fell short in his quest for glory. The winner is sired by Declaration Of War out of Gaslight who has produced several useful sprinters. The runner-up is fashionably bred (Western Aristocrat-Phenomenale)  and performed well enough to suggest that he will see the winning post soon.

The afternoon commenced with trainer Daniel David surprising all and sundry with his eight-year-old runner Prince Of Heart (Dancing Forever-Private Collection) who picked up his second race of the winter meeting. His staying prowess at this late age was commendable and a feather in the cap for his mentor. The connections rather cleverly declared apprentice Tejeshwar whose 3kg allowance played a major role in the gelding’s victory over a mile-and-half. The 18/10 favourite Poras made a sustained effort to get on terms with Prince of Heart in the straight but failed to match strides with him.

Apprentice Tejeshwar went on to complete a double for the day when he brought the curtain down with a stunning atop Shafiq Khan-trained Yutaka (Varenar-Concept). It was another blanket finish that involved five runners. Two ‘nose’ verdicts separated the first three – Yutaka, Stellanova and Tarradhin. The last named had to deal with an outside draw in a 14-horse field, other than which he may have turned the tables.

It is difficult to keep champion trainer Vijay Singh out of the day’s proceedings, especially on the eve of the Derby. Thus, it came as not too much of a surprise to regular turfites at this centre when his 4/1 shot Abhya Gama (Multidimensional-Violet Honey) galloped to victory in the race for the Sunray Handicap. Suraj Narredu kept him in a handy second position while Bang called the shots, and made a beeline for the winning post in the straight. The favourite Eastern Crown continued to earn his corn bill without seeing the winning post. Starofhollywood attracts punters with her name but was a disappointing failure once again.