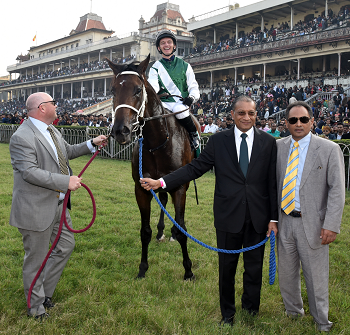 The Calcutta Derby Stakes lived up to its top billing as it produced a grand finale to the afternoon’s proceedings on Sunday. Trainer James Mckeown’s gritty dark bay rig Trafalgar, available at 10-to-7-om, put his best foot forward when it mattered most to lift the blue riband of the season and fetch a winner’s purse of Rs 51.6 lakh for his connections. Owned by Joideep Datta Gupta and his syndicate, the son of Western Aristocrat out of Bluegrass Phenom, had to pull out all stops to keep at bay the threat of Tenno Sho and Trevor Patel. All credit to jockey David Allan on Trafalgar for maintaining his cool at the top of the home straight and keeping his mount on an even keel after he tended to hang out under pressure.Jaivant set a moderate pace, followed by Inca and Streaming Gold. Trafalgar was a handy fourth along the rails till heads turned for home and the nail-biting climax unfolded.

Speaking to www.indiarce.com, trainer James Mckeown said that a special equipment that he had imported from England had helped the Derby winner improve his gate manners and he was one of the first to enter the stalls on this occasion. He also said that his next target would be the Indian Derby in Mumbai. Jockey David Allan too spoke to this website and was of the opinion that Trafalgar will surely improve further before the Indian Derby as he was running after a long break on this occasion. “Had the pace been faster, the ride would have been easier and the victory more easily attained.”

A clearly elated and overjoyed sporting owner Joideep Datta Gopta said that he is glad he named his ward Trafalgar. The name had come to his mind even before he purchased Trafalgar, while he was taking a walk down Trafalgar Square in London. He thought that his next worthy purchase would carry the name Trafalgar after he looked up at Nelson’s column. “ As a yearling, he was unsold at the Broadacres stud farm auction. I saw him a year after that in June 2018. My friend Marty Mahindra of Broadacres could not explain why he wasn’t sold till date. James Mckeown and I saw him trotting at the 300m strip of turf at the stud farm and decided to purchase him instantly. Believe it or not, at that point of time, I knew this horse will win the Derby for me. It was my sixth sense talking to me”.

“All credit to James for encouraging me to make the purchase and advising me not to geld him fully after the discomfort and pain that the colt was feeling due to one smaller testicle slipping inside. By keeping the other normal testicle, there is always a possibility that he may be retired to stud some day. For now, it’s all racing at the highest level. My horses are like my children, I won’t allow them to be in undue pain or discomfort.”  - Indeed so, that’s the ideology of a sporting owner.

The shortest priced favourite of the afternoon was Vijay Singh-trained Silver Bracelet (Win Legend – Silver Profile) who picked up the Dashmesh Stud Alokananda Stakes without much ado. She made every post a winning one in the hands of Suraj Narredu. Jockey Trevor Patel completed a brace with Bath-trained Surf Romance and Neil Darashah’s New Moon.  The former, by Surfrider out of Romantic Quest, bagged the Quasar Handicap from Riquewihr while New Moon (Dean’s Kitten – Atmosphere) had to fight tooth and nail to get the better of Caiden in the race for the Bangalore Turf Club Cup.

Raunak Banerji’s Louboutin ( Air Support-Senora Bella) picked up the t2 Cup at lucrative odds of 7/2 while the favourite Roxor was a none too impressive fourth. Jockey Akshay Kumar on Roxor mad amends with Sarfaraz Khan’s seven-year-old Cocoanut (Sussex-Coco Beach) in the race for the 42 Cup. He had to fight a keen battle with Rare Bird to gain the honour.

The afternoon’s biggest outsider was Javed Khan’s Raqs Sharqi (Royal Gladiator-Safekeeping) who gave Dashrath Singh an armchair ride in the day’s opener – The Aggregated Handicap. The best of the rest was Shivalik Sight. Trainer Vijay Singh and his retained rider Nikhil Naidu  pocketed the Pat Quinn Memorial Cup with Dornish (Abbeyside-Let There Be Light) while Vikash Jaiswal and his jockey PS Chouhan brought the curtain down with Namak Halaal (Surfrider-Aveline). The speedy customer once again made every post a winning one. The disappointment in the race was Atom who ended up a poor sixth.

A word of praise for the young executives at RCTC who ensured smooth sailing throughout the day despite the delay of twenty minutes or so due to Prime Minister’s departure from the helipad in RCTC at 12.30pm.