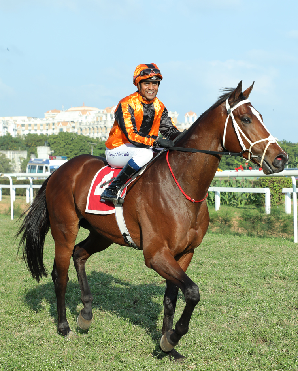 Royal Chieftain hit the front soon on start and eased into a rhythm that was by no means at a quick pace. Sir Supremo settled behind the leader and was in no hurry either. Impavid was close behind with Lightning Bolt on his tail, while Southern Ruler galloped in the rear with only Star Elegant behind him.

They ran in about the same order all the way until the final turn and that’s when jockey Suraj Narredu decided to go for it. Sir Supremo was ready for his master’s call and responded to the urging of his jockey and shot past Royal Chieftain to take charge with just over 300 m to go. Suraj rode out aggressively and Sir Supremo stormed into the lead and stole a march over his rivals. Impavid too hurried in as did Lightning Bolt, but by then Sir Supremo was well ahead of the field and out of reach, galloping away to win by a healthy margin. Lightning Bolt and Impavid fought on but only for the minor placing. Lightning Bolt nosed out Impavid for the runner-up berth, while long-time leader Royal Chieftain held on for the fourth position.

“I am pleased to notch up my first success in the South India Derby. He was in good shape coming into the race and his third in the Guineas too was a satisfactory effort. He had given me a good feel in the Guineas and I am not really surprised by the improvement he has shown over the longer trip. The pace too suited him well and you saw the way he surged forward the moment I asked him to go. He was full of running and he galloped at a good pace all through the homestretch. I did have to ride him out and that was just to ensure we were a safe distance ahead in the last part,” said Suraj.

While Suraj Narredu picked the plum event of the day, jockey Zervan was in raging form booting home five winners which included a double for trainer Reza Shehzad.