MAGNIFICENT SEVEN IT PROVED TO BE FOR WAR HAMMER 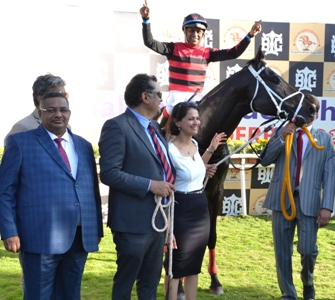 The classy War Hammer put his trainer Prasanna Kumar and his four owners, Dr Prashanth, Gautam Basapa, B S Manjunath and Apana Subaiya in seventh heaven. The top gun who had won from all his six earlier starts, including two classic victories was fancied most in the Shree Meenakshi Sundereshwara Winter Derby and it proved to be Magnificent Seven for the champion, the supremely talented son of Air Support from the Kunigal Stud Farm maintaining his winning streak while registering his maiden Derby success.The champion arguably is the best horse on the Indian racing circuit and it is the opinion of most old hats in the game that the star performer will be hard to down if his connections choose to travel him to Mumbai for the richest event in the Indian racing calendar, the Indian Derby on the first Sunday of February at Mahalaxmi.

Be it the Indian Derby or the Invitation Cup in Mysuru in March the galloping goldmine will be a force to reckon with taking into account that he galloped home to wear the Derby sash fractionally short of the record time registered by Temerity three summers ago. It was a a commendable effort from the champion and kudos to Prasanna for keeping the Derby winner on top of his game and more importantly fighting fit for the blue riband, which offered a rich purse of Rs 83,97,676 to the winner.

The in-form Suraj Narredu who is enjoying a fine classic run settled War Hammer nice and easy in the rear after the field of top six colts and two best fillies, Anjeze and Speedster came under the starter's flag for the mile-and-half Derby trip. Spearheading the `ladies' challenge Speedster set a decent pace all through the backstretch before the grey piloted by Akshay Kumar retired at the top of the straight. At this juncture, David Egan astride Anjeze streaked ahead before Suraj in no hurry reminded the champion ot the task ahead and after a brief duel at the distance post, War Hammer stormed ahead and romped home to wear the Derby sash.

A confident Prasanna Kumar,who was never in doubt about the staying ability of his top ward nor did he fear any in the BTC campus was all smiles while making it clear that he and his owners will take a final call on War Hammer's next target after checking out the champion on Monday. At the draw of lots on Thursday evening, Prasanna in a chat disclosed that all he is doing is keeping War Hammer in happy frame of mind and fit as a fiddle, confident that the rest the champion will do without any fuss. Well War Hammer did just that while making his master proud on Republic day.

Suraj Narredu who had disclosed that War Hammer is the horse to beat after his success in the 2000 Guineas said: "He is a wonderful horse to ride. He always provides his best and his turn of foot is what separates him from the rest. He travelled nice and easy all through and the moment I reminded him of the task ahead when the race came on a boil, he simply changed gears and powered home." The winner clocked 2:28.86 seconds, fractionally short of the course record (2:28.85) in the name of Temerity. The star performer purchased for a reported price of Rs 16 lakhs has now won stakes amounting to 1.5 crore and it will not be long before he doubles the sum in the year ahead.

Prasanna, Suraj and War Hammer apart, Neil Darashah who was under the blanket this winter recorded a memorable treble on D-day. Neil first struck through the ten to one shot Le Marc in the opening event, the upper division of the Saddle Up Cup before leading in the eight to one shot Sea Of Cortez in the next event, both piloted by Nazerul Alam. In line for a grand treble, Neil was very confident on Cosmic Feeling in the upper division of the Totalizator Cup and the top fancy justified the confidence of her master, producing a winning gallop in the hands of Imran Khan.

Suraj Narredu who stole the limelight on War Hammer earlier booted home General Patton from trainer Arjun Manglorkar's yard, who made every post a winning one in the Mysore Race Club Trophy for juveniles. Drusilla with the benefit of a race gallop ran the winner close at the end and it will pay to follow this youngster from Dheeraj's yard when next saddled. So too Limited Source from the stables of Pradeep Annaiah who caught the eye while finishing third ahead of Sporting Memories.