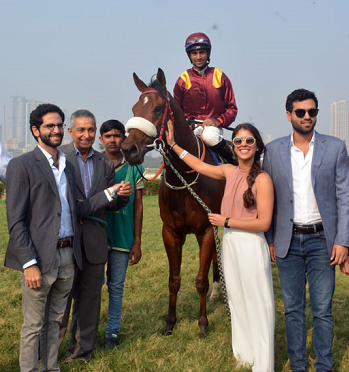 Iron Age (Strong Suit – Intrigue, Manjri Stud), saddled by trainer Imtiaz Sait, not only lived up to the universal expectations but also won his sixth straight assignment with admirable poise. It was a thoroughly professional display of raw speed and doing that with minimum fuss surely has gained him a lot more admirers than he has already amassed.

Jockey P Trevor eased Iron Age out of the gates and the five-year-old gelding cruised into the lead soon after. Augustus Caesar and Clymene were right on his tail, well, until it got serious, with Intense Stylist along the rails and La Magnifique at the rear end.

Trevor had to do precious little as they turned for home. Iron Age picked up speed and galloped in fine rhythm and kept his rivals at bay without really having to step on it. Intense Stylist was ridden hard through the homestretch but didn’t come to even sniffing distance of Iron Age despite an all-out effort from the saddle. With this impressive win in the DR SC Jain Sprinters’ Championship (Gr2), Iron Age raised his stocks for the biggest Sprinters’ challenge – The Sprinters’ Cup (Gr1) during the Invitational week-end at Mysore early March.

Revelator (Chinese Whisper – Martinique, Tohna Stud) compiled a fine hattrick while warding off the late challenge that Gallantry and Sasakwa came up with in the Dr Jagjit Singh Trophy.  Pokerface led them deep into the straight and soon faded out. Revelator moved up places from fourth until the turn to surge past Pokerface approaching the distance post. Jockey Nicky Mackay swung into the lead alright, but still had a furlong to cover and with a bunch of horses snapping close behind, it was not such an easy task. Gallantry, Polynieces, Sasakwa and Cormorant were inching closer at a good rate. Revelator gave off his best and held on stubbornly to ward off the challengers and etch out a narrow win. Gallantry beat Sasakwa and Polynieces for the runner-up slot in an exciting finish.

Trainer Imtiaz Sait had a lucrative day at office leading-in four winners that included Iron Age in the feature event of the day. His day however, did not start on a pleasing note as his ward Gloriosus went down without a fight to Sanjay Kolse trained Sagittarius (Arazan – Glorious Breaker, Poonawalla Stud) in the opening race of the day. Sagittarius pulled off a clinical victory, darting into the lead soon on start. Jockey Sandesh had it ease once they turned for home and Sagittarius sped further away leaving Gloriosus struggling to claw on to the runner-up berth with only one other contender Square Moon in the fray to save the blushes.  Sagittarius won handsomely without encountering any threat at any stage.

Imtiaz started his victorious run with debutante filly Miss Muffet (Multidimensional – Xisca, Usha Stud) who overcame a tardy start to finish off exceptionally well considering this was her first outing. The filly had only Splashing behind her as the latter was even slower at the start.

She Is On Fire led them into the straight but could not last long. Live By Night quickened well and shot ahead shaping well coming into the final furlong. The others spread out and those who were in the front bunch made way for those rallying late in the straight. Arcadia moved up along the rails while Miss Muffet made steady progress with jockey Nicky Mackay piercing through the narrow gap between horses to come up with a sustained gallop and challenging Live By Night. This pair fought hard through the final 100 meters and Miss Muffet got the measure of Live By Night a stride or two from the winning post to achieve a memorable debut victory. Live By Night missed out by a neck. Arcadia edged out Casanova Prince and Chancellor to finish in the money.

It was Imtiaz Sait walking through the aisle from then on for the next three races with the immediate next one leading in Iron Age. Imtiaz followed that by sending out even money favourite Memorable Memories (Saamidd – Celtic Memories, Hazara Stud), the filly scoring her second successive win.

Imtiaz next walked the aisle to lead-in Ithaca (Phoenix Tower – It’s a Dream, Manjri Stud) and Ithaca too scoring his second consecutive win. This was a hard fought one with David Egan in the saddle doing a fine job in sealing a close issue. Peerless moved up after a sluggish start and hit the front through the backstretch leading them all the way into the straight. Peerless galloped gamely on entering the homestretch leaving the others to chase her down. Ithaca started to inch closer approaching the distance post. Peerless fought on bravely but Ithaca, although he took a bit longer, finally got past Peerless closer home to win by half a length. Gold Medalist finished on and managed to pip Peerless for the runner up berth.

So Splendid (Net Whizz – Mullagh, Hazara Stud) notched up a much needed maiden win on his 15th start in the hands of jockey Amyn Merchant. Jack Flash and Lovely Fairy were close together as they led the field home with Cray Cray and So Splendid close behind. Lovely Fairy stretched ahead soon on turning for home. So Splendid warmed up past the 400 m mark and got alongside Lovely Fairy. They fought briefly before the Shahzan Shah trainee got the measure of Love Fairy and pushed ahead. Grand Eyes could only get past Lovely Fairy to finish second as So Splendid kicked on to win comfortably.

MK Jadhav trained Aquarius (Burden of Proof – Bountiful Princess, Sans Craintes Stud) put a stiff defence in the concluding stage of the last race to hold his ground and pick up a hard earned victory. He went smoothly into the lead on start and then had to sustain it all through, particularly in the long Mumbai straight. He shifted out under pressure but jockey Sandesh was on control even as Romanesque and Nusrat were constantly putting pressure. They did get closer; however, Aquarius had enough legs to hold on with Romanesque and Nusrat finishing on his haunches.

For the professionals, trainer Imtiaz Sait saddled an impressive four winners; Jockey Sandesh rode out three winners and Nicky Mackay chipped in with a double.