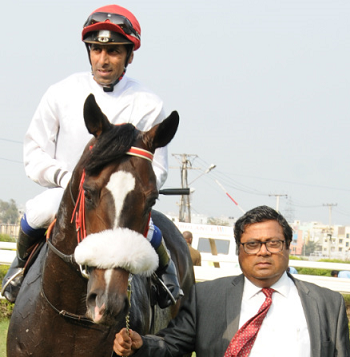 Tootsie Roll (Chinese Whisper – Confluence) produced a steamy run at the business end to create a flutter while winning the upper division of the Lingapur Cup a 1200m affair for horses in Class II. The six year old was way behind until the straight as Happy Together showed good early speed, leading them all the way into the final furlong. Trump Girl, who was close behind the leader, did all she could but just couldn’t muster well enough to get past Happy Together. Just when it looked like Happy Together would hold on, Tootsie Roll, with Imran Chisty in the saddle, arrived with a fiery run to knock them down and there were a bunch of horses in a cluster alright. When Tootsie Roll got going, he was all over them and in a matter of strides zipped past them all to score by over a length. Happy Together held Trump Girl to take the runner-up berth.

Trainer RH Sequeira was the star pro of the day leading in three winners in the eight event card. He started off on a winning note with his ward Honourable Guest (Top Class – Alize) who was hither to winless from 13 starts. Honourable Guest was quick at start leading for a brief while before jockey Mukesh Kumar settled him just behind Symbol of Star’s and Vijays Maestro until into the straight.

Honourable Guest didn’t take too long to take charge racing past the front runners and then jockey Mukesh Kumar started to egg him on. Recumbentibus was taking a while getting into top gear while Wings of Eagles had too much leeway to cover in the homestretch. Both however started to gain on Honourable Guest in the final stages of the 2000m race, but Honourable Guest kicked on gamely to hold his ground at the winning post to carve out a narrow victory, thus opening his account after a longish wait. Recumbentibus and Wings of Eagles finished close behind the winner, both having missed out on a possible chance as they had left too much to do in the final furlong.

The same trainer-jockey combination struck with City of Blossom (Net Whizz – Love Me Tender) in another thrilling finish. Wah Ms Zara led them deep into the straight and weakened approaching the distance post. Mystery who was close second, could not quicken and dropped back as Dancing Dol got past to challenge for the lead. Just as they entered the final furlong, City of Blossom started to accelerate and soon he picked up speed to dash ahead, with about 100m to go. He had a good momentum going and that’s exactly what held him in good stead when Kamyar arrived with a sizzling dash late in the race. Kamyar finished on fastest, but just failed to catch City of Blossom finishing on the haunches of the winner, only managing to pip Dancing Doll and La Mer.

S Sreekant trained Strategist (Multidimensional – Dazzling Skill) had some astute assistance from the saddle courtesy Suraj Narredu. Loch Stella led them into the straight but soon Yours Forever took over. Soviet Pride picked up midway in the straight and shaped well when he got the measure of Yours Forever. Just when it looked like Soviet Pride was well on his way to score, with Yours Forever and Best On show accounted for, Suraj Narredu set about covering a lot of ground to get at Soviet Pride. It looked a tough ask but Strategist responded with a brilliant burst of speed just at the right juncture to collar Soviet Pride to snatch victory on the wire. Suraj could have not timed his finish any better. Strategist won a thriller and Soviet Pride ended a gallant second. Shandaar did well to peg back Yours Forever for place money.

Sequeira’s fourth winner was strong fancy NRI Power (Excellent Art – Awarding) and this too was a close finish. Warrior Supreme led them into the straight and galloped on gamely with NRI Power on his toes. Suraj had to ride the mare all-out as she inched closer to Warrior Supreme and eventuall got past. Once in the lead, NRI Power looked in control but Starlight arrived with a big strong finish only to fall short by a narrow head. NRI Power did well to stay ahead at the wire and thwart the good effort of Starlight. Warrior Supreme ended close behind for the third spot.

Laxman Singh trained The Great Gatsby scored a fluent victory and his second successive win and fourth overall from seven starts. The victory also gave apprentice jockey Santosh Raj his personal first success and that is a memorable and big moment for the young lad.

The Great Gatsby (Speaking of Which – Cest Bon) took off and looked well in control right through the race. He entered the straight with a decent lead in the kitty and then galloped further ahead in the straight. The Great Gatsby looked the winner long way from home and duly kicked on to win by a comfortable margin. Reno Star, Miss Marvellous and Artistryy fought for the minor slots and finished in that order.

D Netto trained Promiseofhappiness (Eljohar – Good Time Sally) spoilt the party for top fancy Nova Scotia lunging forward on the very last stride to snatch away the glory from the favourite.  Nova Scotia had to overcome difficult times in the final furlong; first jockey Suraj Narredu had to check and skirt around horses to get a clear run. When he did there was some jostling that did not help. Despite this Nova Scotia poked through to put his nose in front only to see Promiseofhappiness take it away on the all-important wire. Jockey AA Vikrant never gave up and rode out hard to pull it off in a heated finish. Rhine, Tiger of the Sea finished on alongside as well to make it a real thrilling finish.

When the day was dominated by close finishes, the last race too was a perfect ending with another last stride victory, where Robin Reddy’s Surseine (Stern Opinion – Woodchick) put in a fast gallop to pip Alliston and Platinum Claasz on the post. Alliston got past leader Silver Set with Platinum Claasz putting in a stiff challenge. Surseine arrived late on the scene and it still looked a tough ask for her to get past the fight duo. Jockey Ashhad Asbar didn’t seem to think so as he got the filly to forge her way ahead and managed to get her nose tip touch the wire just in time to shock Alliston to see his savoury moment being snatched away. Platinum Claasz was a short-head behind third.

For the professionals, trainer RH Sequeira was the star pro for the day with three winners. Jockeys Suraj Narredu and Mukesh Kumar scored double each.