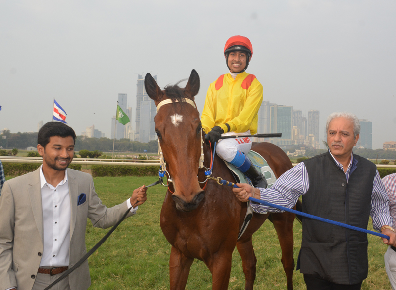 Deepesh Narredu trained Leopard Rock (Kingda Ka – Besame Mucho, Nanoli Stud) finished on with a scorching gallop after stalking his rivals most of the way and pouncing on the front-runners in a manner that is the patent of the Leopard in the wild. Wisecracks aside, Leopard Rock was way behind when Gold Charm led the field into the straight. Star Sincerity, who was closest behind the leader, couldn’t quicken too well and failed to make any progress. Smokin’ Hot, the prime fancy too was making little headway after being in a handy third position turning for home with Willows going past him soon after. Smokin’ Hot seemed to have been slightly unsettled soon on entering the straight and had to be steadied; that may have had a bearing on her stretch-run. Gold Charm shaped well until into the final furlong, which is when Leopard Rock got into the act. Leopard Rock unleashed a powerful burst in the hands of jockey SA Amit and the moment he picked up speed, it was all over for the rest as he simply zipped past them all in a scintillating manner. His finishing-burst was so scorching that he won by a good margin of two and half lengths, that after conceding a fairly long leeway at the beginning of the homestretch. Aegon too finished on purposefully ending a comfortable second, while Gold Charm utilized his handy lead to claim place money.

Van Dyke (Kingda Ka – Leserre, Nanoli Stud) bettered his margin of victory over Western Front whom he beat narrowly last time out. Having held sway until beaten close home on that occasion, Western Front changed tactics and settled in the rear trying his hand at playing the waiting game. Van Dyke progressed steadily in the early stages to settle close behind leader Khartoum all the way into the homestretch. Jockey P Trevor soon decided to go for it and surged ahead to take charge. Rhapsody who was between horses at the turn, had to skirt around horses for clear passage and that perhaps made things more difficult for her.

Van Dyke galloped strongly right through the long Mahalaxmi straight. There was a slight hope for the connections of Western Front when the gelding appeared to be closing-in on Van Dyke, but all hopes soon faded away as the Vishal Gaikwad trained gelding kicked on fluently to never loosen his grip on the race at any stage. Western Front had to settle for the runner-up slot yet again. Rhapsody made some headway in the final few strides and that clearly showed that she preferred more galloping ground.

Dallas Todywalla trained Mount Moriah (Leitir Mor – Tartouche, Poonawalla Stud) achieved his maiden success in his fourth start. Although he was a wee bit wayward in keeping a straight course, he managed to keep the momentum going to score an otherwise comfortable victory. Oui Savage, Ron and Mount Moriah were almost abreast as they turned for home. This trio fought briefly with Mount Moriah quickening way better than the other two. Jockey David Egan stormed ahead and it looked certain that Mount Moriah was galloping away for a big win. However, the gelding drifted out just as Speed Air was coming along with a late dash. That drift did cause a bit of anxiety but David soon dispelled any concerns as he urged Mount Moriah on to ensure a comfortable victory. Speed Air had to switch lanes to move on the inside of Mount Moriah; however, he never looked like beating the winner on the day. He returned second best yet again, but will live to fight another day. Oui Savage saved the place money finishing just ahead of Ron.

Pesi Shroff trained Parisian (Champs Elysees – Anywaysmile, Usha Stud) was tking on an ordinary set of rivals on her debut and she made most of it by firing away to a good start and then settled down in fourth as Multibbager and Big Ben matched strides out in front.

Jockey NS Parmar didn’t wait too long and produced Parisian between the pair in front and soon darted ahead.  Parisian picked up briskly and got into a fine rhythm. She stretched out well and was away from the rest coming into the final furlong. Sweeping Move did raise some hope for her camp, but Parisian was simply too good as she sustained her tempo all the way to land the spoils with a big margin of five lengths; a noteworthy effort for a rookie to come up with. Sweeping Move ended second ahead of Éclair. Favourite One For The Glory made little impact, ending a dismal fourth.

Dilbar (Ivory Touch – Circus Ring, Ruia Stud) was another one who achieved her maiden victory on her seventh start. She was right on the tail of the leader Maestro as they straightened up for home. Maestro held on to the lead for a little while longer, as Dilbar took a stride or two to warm up. Jockey Shubham then got the filly going and she soon surged past Maestro and looked on course to pull it off comfortably. However, Forever Free charged in late and did give the on-money favourite a scare, but Dilbar had enough legs to clinch it by a neck. Forever Free ended a good second, while Maestro finished in the money.

Trainer Narendra Lagad secured a double his first winner being Ustad Pedro (Western Aristocrat – Edessya, Nanoli Stud). The fight seemed to be confined between early leader Brave, Westros and Julio Cesaro as these three were clear of the rest approaching the distance post. Ustad Pedro was way behind and started to make his bid from the wider outside. Westros put his neck in front between the fighting rivals with Julio Cesaro too close for comfort and Brave sticking by and just when it looked like Westros was going to pull it off, jockey Trevor arrived astride Ustad Pedro with a flourish. He swooped upon the trio with a well-timed finish and knocked them down to pull off a thrilling victory. Westros edged out Julio Cesaro and Brave for the runner up berth.

Narendra Lagad had saddled four runners in the concluding race of the day and fetched rich returns with three of the four fighting at the finish a pitched battle through the homestretch. Abraxas led them into the straight and soon Red Carnation (Varenar – Charlotte Point, Equus Stud) moved up to challenge the leader. Just as these two were fighting for command, their stablemate C’est L’Amour joined the battle.  They battled hard and eventually jockey Kaviraj pushed hard to score by a length from C’est L’Amour and Abraxas. Saltbae ran on to take the remaining spot in the frame.

For the professionals, trainer Narendra Lagad and jockey P Trevor scored double each.