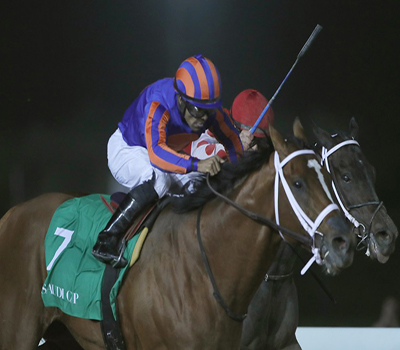 Maximum Security may have been disqualified from the world’s most famous horse race, the Kentucky Derby, but on Saturday he won the world’s richest, the $20-million Saudi Cup.

The 4-year-old colt ran a strong race off the pace and held off hard-charging mare Midnight Bisou to win by a half-length in the first running of the race at the King Abdulaziz Racetrack in Riyadh, Saudi Arabia.

The top two horses are based in the United States. Benbatl, who has done most of his racing in England and Dubai, was third. Santa Anita-based Mucho Gusto, running for Bob Baffert, after leading most of the race was edged out and finished fourth.

Maximum Security probably will always be remembered for the race he didn’t win when last year he was the first horse in the 146-year history of the Kentucky Derby to be disqualified on race day for interference.

On Saturday, Maximum Security, according to his connections, was the recipient of interference.

“The guy in front of me was carrying me out,” winning jockey Luis Saez said of Irad Ortiz Jr. aboard Mucho Gusto. “But we pick inside and he fights.”

Winning trainer Jason Servis was not as kind in his assessment.

“Irad had me all over the place,” Servis said. “That was unacceptable, I thought.

Maximum Security was the winner, but the performance of Midnight Bisou might have been more impressive. At the back of the pack, jockey Mike Smith kept her on the rail and almost caught Maximum Security winner in the 1 1/8-mile race.

Both horses will now have to consider if they want to stay in the Middle East for the Dubai World Cup on March 28.

Saez could barely contain his excitement and it wasn’t about the jockey’s $1-million share of the winner’s $10-million prize.

“This is amazing,” Saez said. “This is the boy. He comes here, he shows he’s the best. I can’t tell you how I feel. This is unbelievable. This is for Panama and USA.”

Baffert’s other horse, McKinzie, was never a factor and finished 11th in the 14-horse field.

Kentucky Derby Prep: The major prep at Gulfstream Park on Saturday was won by Ete Indien in the Grade 2 $400,000 Fountain of Youth Stakes for horses going 1 1/16 miles on the dirt. The 3-year-old colt took the lead out of the gate and stayed in front to win by a widening 8 ½ lengths. The colt did go off at 3-1 odds, so his win was not unexpected.

Patrick Biancone was the winning trainer with Florent Geroux in the saddle.

What was surprising was the run by odds-on favorite Dennis’ Moment, who was ridden by Santa Anita jockey Flavien Prat for trainer Dale Romans. He broke poorly, never made a run and finished last.