BATTLE FOR CHAMPIONSHIP HOTS UP 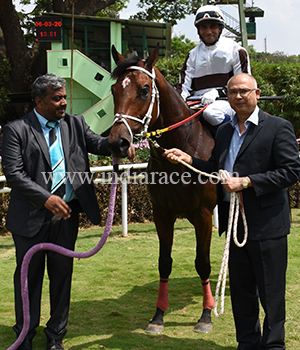 The battle for the champion trainer title is really hotting up. Prasanna Kumar, who heads the list with a solitary point, Sulaiman Attaollahi, Padmanabhan and Pradeep Annaiah are all in with a definite chance and this has generated maximum excitement among the railbirds supporting their favourites.

A good double by Prasanna on Friday through Ansaldo and Fictioneer pushed Prasanna to the top of the leader board. The bred in the purple Ansaldo made a impressive debut in the March Plate for juveniles. The winner from the famed Usha Stud Farm produced a good turn of foot in the final furlong to edge out Perfect Perfecto. The on-money favourite Excellent Queen from Parvati Byramji’s yard finished a tame third. Ansaldo on the strength of his debut victory looks a goodtype and his progress is certain to evoke interest.

Fictioneer who lost out to the in-form Le Marc in his last essay earned his winning bracket in the Icebreaker Plate run over a mile. A part owner of the winner, Swaroop Kumar who sponsored the Bangalore Derby and was a co-sponsor in the Indian Turf Invitation Cup delighted leading in his second winner after Musterion on the D-day at Bengaluru disclosed that the second success did provide the thrill and joy. Fictioneer rightly garnered the maximum support and leading pro John confidently guided home the top fancy. Chantelle gained the runner-up berth ahead of Custom Cut while My Vision completed the frame.

Neil Darashah shared the training honours with Prasanna striking it rich on Adela and Le Marc. The former came up tops in the upper division of the Karwar Plate to the delight of his supporters while the Kishan Thomas camp who strongly fancied Sir Piggot in this event were floored. The winner on the strength of her suggestive second behind Show Girl had the credentials to score in this set. But the manner in which Sir Piggot was backed resulted in some supporters of Adela also switching camps. However, Adela piloted by apprentice Chetan Gowda gained the day and all Sir Piggot did was follow the winner home. Lovely Sierra finished a satisfactory third ahead of Altair.

The in-form Le March from Neil’s yard registered a fine hat-trick winning the Becket Plate run over a mile in the hands of Trevor Patel. The winner was surprisingly ignored in the betting ring despite the fact that Le Marc had won her two earlier starts in emphatic fashion. Incitatus and Astral Force were the top two fancies. The latter finished third while Incitatus in the hands of Pradeep Chouhan failed to even make the board.

Blue Moon from Dheeraj’s yard justified favouritism in the Manas Sarovara Trophy, the plum event run over a distance of seven furlongs. It was good to see the Rai camp back in the winners’ circle. The winner who had impressed most in her last essay produced another good effort to stand tall at the podium. Set To Win edged out Attorney General at the shadow of the winning post to gain the runner-up berth while the other fancied runner in the fray Commodus failed to even save money in place.

The principal added attraction, the upper division of the Dr.KTB Menon Memorial Trophy produced a shock result, the eight to one shot Winall from trainer Arjun Manglorkar’s yard proving too good in the dozen horse field headed by Sandarina who enjoyed the top billing. The public choice after promising much in the straight only manged to finish third behind the runner-up Debonair. Now that Winall has learnt to win, it will pay to follow this Arjun ward when saddled next. The lower division of the event was claimed by the second in demand at the betting ring Up Front from trainer Irfan Ghatala’s yard after the well-backed favourite On The Trot from the stables of Arjun was withdrawn at the stating gates. Slice Of Heaven from Prithviraj’s yard caught the eye while finishing a game second and it will not be long before Slice Of Heaven earns his corn bill.

The opening event, the lower division of the Karwar Plate was claimed by the topweighted Eco Friendly from Sharath Kumar’s yard. Apprentice jockey M Naveen who booted home Eco Friendly emerged the lone jockey to record a double, packing punch on the ten to one shot Ispelldangertoall in the concluding event.