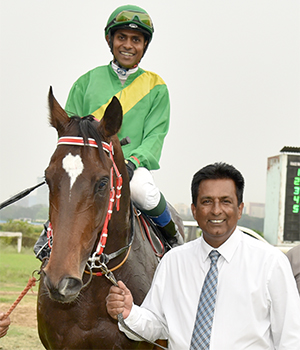 In a dramatic finish to the race for The Aperitivo Cup run over the metric mile, trainer Vijay Singh’s Shivansh (Top Class-Immortal Story) put it across Shivalik Showers and public choice New England. Jockey Suraj Narredu had the five-year old bay in a handy fourth slot till heads turned for home. The pace-setter was the front-running Shivalik Showers. Once into the straight, Suraj went hell for leather, and though he drifted to the outer rails, he still had over a length to spare to the pace-maker. Suraj Narredu thus completed a brace, having won on Louboutin earlier. Not to be left behind was leading jockey Imran Chisty, who too completed a double with Kimaya and Itsamoocow. The last named was a chance ride in the absence of Ashhad Asbar.

Another notable absentee was A Sandesh whose place in the saddle atop Namiki was taken by Trevor Patel. Vijay Singh-trained filly Namiki (Total Gallery-Cordoba) went on to win the Gridiron Plate after getting the better of ante-post stablemate and favourite Daring Heart and 5/1 shot Devine Chakra. The last named was 4kg better placed than Namiki for a nose verdict, but lost the advantage at the jump-out from an inside draw. He had to work his way to the outside of the field for a late charge which fell short by a length. Then again, that’s a part of the game. One can’t always expect a ‘perfect’ ride – even from a top jockey.

The afternoon commenced with Christopher Alford-trained Romantic Zeal (Chevalier-Santarelle) making a start-to-finish affair of the seven-furlongs race for the Voltige Handicap. The ante-post favourite El Mulano finished on a far away second. This was the second win for Shezad this season atop a runner from C. Alford’s yard. The change of tactic worked well for the five-year-old mare. Alford himself had ridden her to victory over a mile-and-quarter more than a year back.

The ‘No Whips’ race for the Usher Handicap saw the two fancied runners Louboutin and Cliffs of Capri come out of the gates like scalded cats. After a furlong or so, Raunak Banerji-trained Louboutin (Air Support-Senora Bella) with Suraj Narredu astride shot ahead and held on to his advantage till the wire. The runner-up ran a noteworthy race and should win soon.

The race for The Nero Handicap run over five-and-half furlongs depended a lot on who would hit the front at the jump-out and none did it better that PS Chouhan atop Vikash Jaiswal-trained Namak Halaal. The four-year-old speedster by Surfrider out of Aveline thus notched up his third win of the season. His mock race with Amorous White a week earlier was rather impressive and this helped him pull it off. Trainer Jaiswal has done a wonderful job with this sprinter.

Jockey Imran Chisty is heading the jockeys’ tally narrowly from Suraj Narredu and he ensured that the lead stays intact with a difficult double. Recent winner Kimaya (Sedgefield-Saporelli) produced an encore in his hands despite a penalty of 4kg. The disappointment in the race was Pep Talk who was an ‘also ran’. Chisty took the filly to the helm of affairs early in the race for the King Wajid Ali Shah of Oudh Cup and stayed there all the way to the winning post. He continued his good work astride Robert Gowli-trained Itsamoocow (Surfrider-Celebrations). The small-made filly showed great resolve and raised a rousing gallop in the straight to break out of the maiden ranks in style.