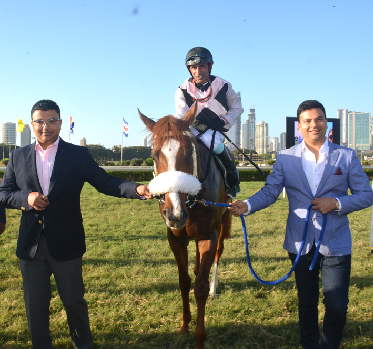 Malesh Narredu trained Gallantry (Kingda Ka – Vittoria, Nanoli Stud) displayed tremendous fighting spirit and notched up a well-earned victory. Jockey PS Chouhan played his part commendably all through the race to ensure there was no last minute shock as Sunrise Ruby did throw a game challenge in the run up to the wire.

Gallantry was out on a start to finish mission and led the field home with Revelator and Sunrise Ruby close behind. While Revelator found it harder giving weight around, Sunrise Ruby slipped in through the rails and fought stride for stride through the final furlong. Sunrise Ruby did everything she could but she just couldn’t get past the gritty Gallantry who held on stubbornly all the way through to the wire. Sunrise Ruby ended on the haunches of the winner, clearly ahead of Revelator. Rhapsody was withdrawn at the gates.

Shazaan Shah trained Joaquin (Saamidd – Phoenix, Hazara Stud) romped to an even more impressive victory than he had last time out. Joaquin shot into the lead soon on start and had a firm grip on the proceedings right through the race. Jockey Sandesh entered the straight with a handy lead astride Joaquin with Skyfall and Leopard Rock a couple of lengths behind him. Joaquin quickened well and darted further ahead of the two closest behind him and looked the winner even with a furlong to go. Leopard Rock was fully pressed but could do no more than reduce the margin to just over a length at the finish. Soaring High ran on to save place money.

Mount Moriah (Leitir Mor – Tartouche, Poonawalla Stud) was another won to score an encore and he too won with a good measure of comfort. He moved up well past the 800m marker to be in handy second position behind early leader Clark Kent as they turned for home. Jockey David Egan didn’t hang around too long and shot into the lead past the 400m, stretching out and away from his rivals. He was well in front in the final furlong and none was getting anywhere close to the Dallas Todywalla ward. Mount Moriah won easing up with more than three lengths to spare. Oui Sauvage improved well in the straight to finish second after gracing the rear end of the field until into the homestretch. Mikayla’s Pride ended a tame third.

Trainer Dallas Todywalla had lead-in ten-to-one shot Highland Lass in the earlier race. The five-year-old mare was astutely ridden by apprentice jockey PS Kavraj, who guided her on her successful start to finish mission. Highland Lass looked in control right from the start and once they entered the straight, she quickened well to stay safely ahead of Thomas Hardy who chased her all the way. The fight was on only for the runner-up berth with Grand Architect rallying well in the finishing stages, but Thomas Hardy held on deftly to ward off Grand Architect. Highland Lass was being eased up while the other two were vying for the second slot.

Adams Beginning (Sedgefield – Adams Law, Jai Govind Stud) pulled off a thrilling win in the opening race of the day. Arabian Muktar led from the start and had Adams Beginning close behind as they turned for home. It was a straight fight between these two as it panned out and both the front-runners fought it out all the way to the wire. Arabian Muktar had a slight edge in the first half of the straight, but jockey Dashrath Singh rode all-out to eventually wear out the early leader. Adams Beginning, from Adhiraj Jodha’s yard, gained on Arabian Muktar in the final furlong to snatch victory in the last few strides of the race. Principessa edged out Sandra’s Secret for place money. Osprey Arrow was the one moving the quickest in the final stages, falling short by a whisker to make it to the frame.

Flying Dragon (Tariq – Divine Elegance, Yeravada Stud) put in a good gallop and reaped rich rewards while scoring his fourth career win. Veteran trainer SS Shah had kept this old timer in good condition as the eight-year-old was racing now and then and also finishing in the mid-bunch more often than not. He got to his best on the day and took off soon on entering the straight. Leader Highdare was reluctant to surrender the lead, but when Flying Dragon started breathing fire, there was nothing stopping him. He was ridden out well by apprentice jockey AS Peter and he pulled away from Highdare to score by over two lengths. Highdare did well to ward off the late dash of Arizona Pie for the runner-up berth.

Imtiaz Sait trained Twinspire (Mull of Kintyre – Atmosphere, Sohna Stud) put in an inspired finishing run to get the measure of Blazing Bay who went down fighting. Blazing Bay showed good early speed to get to the front on settling down. Twinspire and Arabian Storm were close behind with Ame a length away. Favourite Golden Steal was not too far behind as they turned for home.

Blazing Bay shaped well in the straight, while Twinspire seemed to be working too hard to bridge the two-length gap approaching the distance post. Golden Steal too was showing progress and getting closer to the two in front. Blazing Bay was still ahead in the final furlong, but his lead was fast diminishing. Twinspire was getting closer with every stride and she finally caught up with Blazing Bay in the last fifty meters and although Blazing Bay galloped on, Twinspire got past to score achieve her maiden win on her fifth start. Blazing Bay ended a close second, just a length ahead of Golden Steal.

For the professionals, trainer Dallas Todywalla and app jockey AS Peter scored a double each.