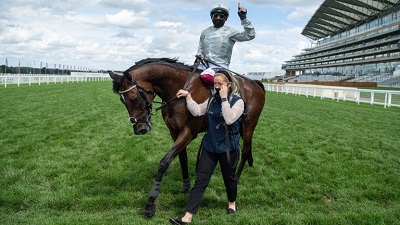 Palace Pier emerged as the new star of the mile division, striking late to deny Pinatubo in a thrilling St James's Palace Stakes and complete a 150-1 treble for Frankie Dettori on Saturday.

Dettori, having already struck with Campanelle and Alpine Star, was always confident on Sheikh Hamdan bin Mohammed Al Maktoum's three-year-old. In a race of muddling tactics Dettori did not fancy getting involved, instead switching Palace Pier to the outside and avoiding all potential traffic trouble.

As the rest jostled for position when they turned for home, a poised Dettori was best placed to strike. He moved well on the John Gosden-trained runner but it was last season's juvenile ace Pinatubo who travelled with exuberance as his rivals began to work hard.

The Godolphin runner charged into the lead but while Pinatubo had speed, the hard-driven Palace Pier had stamina and he continued to battle on from his handy position, eventually hitting the front to win by a length.

Wichita, second to Kameko in the 2,000 Guineas, had attempted to make all on the rail but finished a head behind Pinatubo in third. There was a four-and-a-half length gap back to Positive.

Gosden won his first St James's Palace Stakes with Kingman – the sire of Palace Pier – in 2014, before he went on to land the Prix Jacques le Marois. Palace Pier will attempt to emulate his sire, with Deauville's Group 1 event on August 16 his likely next target.

"What a day!" said Dettori after riding his 73rd Royal Ascot winner. "It was hard to really get him fit but John thought let's start him in a handicap which should wake him up, and it did. We weren't sure how much of a good horse he was, and today was no fluke. He went wide and I'm pleased he showed me today what I thought he could be.

"We always thought a lot of Palace Pier but his work in the spring wasn't what we thought it could've been, but since Newcastle he's turned a page. I expect him to improve a bit after that first Group 1.

"At the moment the mile is in his reach and there are plenty of good races over a mile. I'm sure John will find a good path for him. My job was to keep him honest and off the bridle.

For John Gosden this was a third win in the race, having last won it with Without Parole in 2018.

"I think his two wins last year were impressive," said Gosden, who was enjoying his 55th Royal Ascot winner. "Not being able to race was the main reason he couldn't run in the Guineas. I can't insist enough that he would've run in the Greenham, and if that was around we would've gone for the Guineas.

"That Newcastle race brought him on and he had a good clean run there. He really showed his stamina today.

"It's wonderful for the staff and it isn't easy training during lockdown. Full marks to the staff who have helped make all this possible. It's a credit to our owners and it would've been easy with lockdown to overtrain runners."

Palace Pier was cut to 2-1 for the Sussex Stakes but Gosden confirmed he would not be heading to Glorious Goodwood.

Gosden added: "He won't run in the Sussex Stakes, it's a totally different kind of track and would be much more suited to Pinatubo."