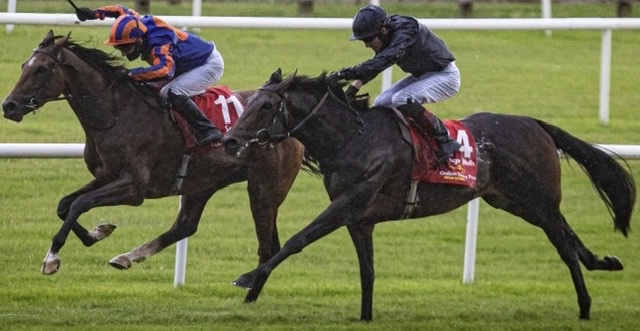 If you head due west from Ballydoyle and travel the distance of an Irish Derby as the crow flies, you'll land at the gates of Rockwell College, the grand old secondary school and rugby institution that used to be run by the Holy Ghost Fathers.

It was founded nearly a century before Vincent O'Brien decamped to Rosegreen but the Gothic, cut-limestone architecture and demesne retain all of their patrician majesty. The alma mater of Walter Swinburn, as well as Joseph and Donnacha O'Brien, the motto on its coats of arms is Inter Mutanda Constantia. Constancy in the midst of change.

It's an ethos by which the O'Brien brothers' esteemed father also might be defined. At the Curragh on Saturday, Aidan O'Brien farmed his 14th Irish Derby, as Santiago justified 2-1 favouritism in decisive fashion under Seamie Heffernan, beating stablemates Tiger Moth, Dawn Patrol and Order Of Australia.

The mile-and-a-half Classic was run for a purse of €750,000 – half of its 2019 value – and there was no international participation, nor public attendance for the first time in the history of the race. In a world turned upside down by the Covid-19 pandemic, though, O'Brien provides the sort of surety we so crave in a time of such disconcerting uncertainty.

"We’re delighted with that," said O'Brien after a Derby that was run in a heavy shower of rain and with a strong tailwind blowing up the straight.

This is a Classic dominated by O'Brien more than any other. No trainer has exerted such a stranglehold on any of the other major European Derbys, and that point was illustrated again by his clean sweep of the first three places, with the fourth thrown in for good measure. Remarkably, that means he has saddled the first three in 50 per cent of his Irish Derby victories, which is quite startling when you consider his predecessor won the Group 1 just seven times in all.

There's constancy in the midst of change, and there's Aidan O'Brien. Not so much constant as an ethereal keeper of the flame at Ballydoyle.

With the Dubai Duty Free-sponsored showpiece being run before the original of the species at Epsom for the first time, and given their proximity, there's no doubt this wasn't a vintage edition. That prompted increased local interest, with the 14-strong field featuring a raft of protagonists tilting at windmills for a first time in a Classic. There were seven maidens among them.

Still, the conceit of it being worth having a pop for one and all proved just that. The Irish Derby's position in the calendar made for a novel change but, despite our newfound understanding of the word, the novelty didn't extend as far as the result.

The win was Heffernan’s fourth in the race and, with Donnacha O’Brien now training and Ryan Moore largely confined to home soil, he will rattle a first championship this year. That would be a deserved reward for the 47-year after more than 25 years at O’Brien’s service.

Santiago had run just eight days earlier when taking the Queen’s Vase under Moore, and Heffernan was keen to pay credit to his mount’s constitution. "He's a tough horse to come back from a mile and six furlongs last week, but the Curragh suited him,” said Heffernan.

“Lorcan Donnelly, who rides him out, told me I’d ride another Derby winner and he was right. This horse has guts, and, if you have guts, you don’t always have to be on the best horse in the race.”

Heffernan took cover early, with the fractions set by Iberia. He had to manoeuvre his way out, but when he got his run his mount knuckled down and put the race to bed.

“It wasn’t ideal dropping in, but I took a gamble because of where I was drawn and rode him for luck,” Heffernan said of the tactics. “Once I put him in gear, he switched up.”

On the day of a historic political shift that saw Fine Gael and Fianna Fail end nearly a century of civil war rivalry by forming a coalition with the Green Party, we were reminded that, in Irish racing, O’Brien’s grip on power remains utterly absolute. Inter mutanda constantia.