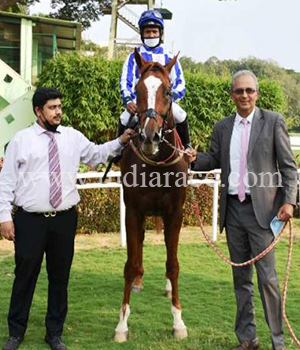 It was good to see horses back on track at the Bangalore Turf Club (BTC) and now that racing will resume in Chennai this week and Hyderabad set to start later this month, the racing fraternity is pleased that the sport is back in business never mind the spectator-less start and the no betting scene. It was no surprise that only 75-100 owners were present to witness the action on the first day and that’s understandable taking into account that most don’t want to take the risk knowing that despite the dip in the Corona positive cases last week in Karnataka, Bengaluru still remains one of the worst affected cities. But to the credit of the BTC, it must be mentioned that they had made good and safe arrangements and apart from the owners most professionals while lauding the efforts of the managing committee disclosed that in the weeks ahead the sport will draw bigger attendance number.

Well the first day produced many shock winners. The show opened with the Prasanna Kumar-trained Mistletoe piloted by Anthony Raj coming up trumps in the Kentucky Plate run over a distance of seven furlongs. The Irfan Ghatala schooled Watchmystars and Drusilla from Padmanabhan’s yard were fancied most in the opener. The Irfan ward finished third while Drusilla failed to make the frame. It is no secret that most railbirds including big bettors placed their bets with bookies operating from their many hide-outs and satisfactory volumes were generated. In fact a majority of Indian racing punters are placing bets on English, Australian and Hong Kong races and many English and punters from Dubai and China are betting on Indian racing. This illegal betting scene is no breaking news and in fact is an accepted fact.

The feature event produced another shock result, Salazaar from Irfan Ghatala’s yard piloted by Anjar Alam edging out Cosmic Ray to win the first plum of the season. The Darius Byramji schooled Multifaceted was the top fancy, but he in the hands of Suraj Narredu after hitting the front at the top of the straight failed to quicken and eventually failed to make the board. Shesmyscript impressed most while finishing third while Cosmic Ray appears ready to get into the winners’ circle when saddled next.

Malwa on form was the best among the dozen runners in the fray for the Vidhana Soudha Cup run over a sprint and he readily justified the confidence of his connections, producing a winning gallop in the final furlong to peg back Attorney General who looked set to score after assuming command at the distance post. Malwa on the strength of this victory is set to provide and encore when saddled next.

Estella from trainer Mohd Khan’s yard surprised most winning the Inauguration Plate run over a sprint while Born Queen from Satish Narredu’s yard guided home by Suraj made every post a winning one in the Belgaum Plate run over a distance of seven furlongs.

One other winner who impressed most on the opening day was the Ganapathy-trained Manifest who floored his 11 rivals in the Ranganathittu Plate. Deepak Patel, who partnered Manifest had not ridden a winner for more than three years and that Manifest bolted in with Deepak on his back only confirms that this son of Multidimensional from the famed Usha Stud Farm has a bright future.