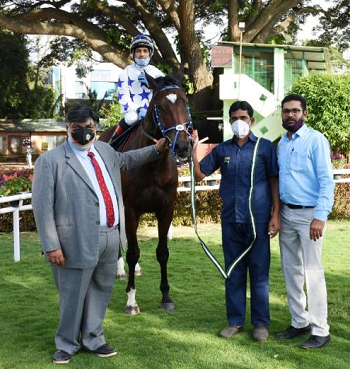 The top Indian `Knight’ Trevor Patel and leading trainer S Padmanabhan  stole the limelight on the second day of the winter season. The former booted home four winners while Padmanabhan led in three on a day form played true and most fancied horses justified their ranking.

Trevor opened his account guiding home the favourite Katana in the Aihole Plate run over a sprint. The winner from Sulaiman Attaollahi’s yard remained the top fancy despite the fact that the Satish Narredu schooled Cherokee Moon had her fair share of followers and garnered good support at the end. But the Satish Narredu ward found Katana too hot to handle the moment the Sulaiman ward produced a winning gallop at the top of the straight and struggled hard to finish second ahead of the bred in the purple Silverita, who is certain to enters the winners’ circle in the weeks ahead.

Next astride the Padmanabhan-trained Lord Frankel, Trevor needed to stretch every sinew to gain the verdict ahead of the impressive Christopher Wren from Neil Darashah’s yard and the second favourite Antibes from the stables of Arjun Manglorkar, a `neck’ and a `head’ separating the first three at the wire. Lord Frankel, it is learnt opened even-money favourite in the illegal betting channels before easing out to (6/4), some money coming in support of Antibes, but thanks to the determined effort of Trevor, the Padmanabhan ward just lasted out to the delight of his followers.

On the half-money favourite Nisus, who chalked out his third straight victory, Trevor didn’t really need to exert himself, the Prasanna Kumar youngster romping home the moment Trevor eased the hold on the talented Gusto progeny, who recorded a fine hat-trick. All credit to Prasanna for maintaining his high percentage of success with the youngsters and now that War Hammer is back and running after recovering from a setback in training, the champion trainer is set to call the shots and stay at the top this season. Electra finished second in the Air Force Trophy run over a distance of seven furlongs behind Nisus and it will not be long before this Neil Darashah ward earns her corn bill.

After recording a treble, Trevor signed off in style helping Padmanabhan to register a treble, packing punch on Rorito in the concluding event to get the better-off the topweighted Grey Channel who was tenderly handled by jockey R Shelar. The M R Singh ward could well have gained the verdict in his favour had his rider displayed willingness to score. The grey despite the inept handling finished a close third and is one for the notebook. It is clear that R Shelar will need to do a lot of explaining in the stewards room. Jain Sahab too caught the eye while gaining the runner-up spot, but this sahib who was under the care of Padmanabhan earlier is a moody type and is not a good betting proposition.

Earlier, the Neil-trained Night Secret shocked the followers of form in the opening event, chalking out a pillar to post victory in the lower division of the Antar Gange Plate run over a distance of seven furlongs. Handsome finished second ahead of Rule Of Engagement who was strongly fancied by Pradeep Annaiah’s yard and the right connections to pull off a coup, but that didn’t happen simply because the Night Of Thunder progeny proved too good in the hands of jockey Imran Khan. Night Secret appears a goodtype and it will pay to follow this Neil trainee in the months ahead.

The lower division of the event was claimed by the five to one shot Jack Ryan from trainer Padmanabhan’s yard. The winner tracked the fancied duo, Caracas and the favourite Arlette for most part of the trip before Neeraj Rawal setalight the winner past the distance post to gain control and put the issue beyond doubt in the final furlong. It was good to see the unassuming owner Chandrashekar Rai back leading in a winner after a long break and now that Jack Ryan has struck a couple more donning the popular silks appear set to stand at top of the podium in the weeks ahead.