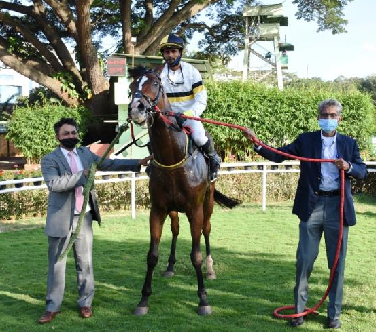 The third day of the winter season proved to be a disaster for the followers of form, all eight favourites taking a back seat, while the outsiders waltzed to victory much to the chagrin of the many railbirds, who watched the action from the comfort of their living rooms, while some including the owners who had entered their horses in the competitive eight-event card on Saturday returned home, not very pleased with the results.

The no-hoper Miss Pareil from trainer Arjun Manglorkar’s yard dropped the biggest bombshell in the Royal Calcutta Turf Club Cup, winning the principal added attraction run over a distance of seven furlongs in emphatic fashion from the Irfan Ghatala schooled Watchmystars and the Prasanna Kumar schooled Ansaldo. The fact that the winner Miss Pareil a progeny of Air Support from the famed Kunigal Stud Farm was not sent out spot on and yet she managed to score despite gracing the wrong end of the field for most part of the trip puts her on the classic scene taking into account that this fashionably bred Arjun ward will love to parade her optimum skills over extended trips. Miss Pareil has tremendous scope for improvement and her progress is certain to evoke interest in the classic circles in the weeks ahead.

The on-money favourite Lagarde from Sulaiman Attaollahi’s yard, who had made a smashing debut last winter and was tipped to start the favourite in the second classic of the season, the 2000 Guineas next month finished down the field, last of four. The dismal effort of the public rage was too bad to be true and it is clear that all was not well with Lagarde, who was seen struggling at the top of the straight to keep pace before dropping out two furlongs from home.

Sulaiman’s one other fancied runner Anjeze who was strongly tipped to take home the Karnataka Police Trophy found Northern Alliance from trainer Neil Devaney’s yard too hot to handle and had to rest content with the runner-up berth. The favourite piloted in copybook fashion by top gun Trevor Patel stole a march at the distance post and appeared set to justify favouritism before Prabhakaran packed punch on Northern Alliance and the better performed winner, who is far superior to the four-year-old filly  from the Dashmesh Stud Farm made Gusto from Bishan stud proud. Manchester finished a game third while Speedster and Peluche performed below par.

After two of his most fancied contestants failed to get into the winners’ circle, Sulaiman managed to get one going in the concluding event, the Red Baron Plate run over a distance of seven furlongs. Second in the favourite list, Hokkaido, who looked a picture of fitness at the parade ring bolted in by a widening margin of nine lengths in the hands of Suraj from Venus Bay, while the strongly supported Papparazi from trainer Arjun Manglorkar’s yard, who failed to gain a favourable position early on in the race only managed to finish third ahead of Bold Move. Hokkaido is in top form and it will pay to follow this Sulaiman ward again when saddled next.

The Satish Narredu-trained Splash came up trumps in the lower division of the Chintamani Plate run over a sprint. The winner in the hands of Suraj Narredu produced a winning gallop at the all-important end to snuff out the challenge of the well fancied Torosanto from Narayan Gowda’s yard and Legendary Princess from the stables of Padmanabhan. The runner-up, it must be mentioned will benefit from this exercise under his belt and is certain to earn his cornbill in his next essay.

The upper division of the event was claimed by the five to one shot Songkran from trainer Dominic’s yard. Trevor Patel astride the winner needed to stretch every sinew to edge out Amazonite piloted by a whipless apprentice Mohammed Aliyar. Estella finished a creditable third while the top fancy Dragon Mountain failed to even make the frame.

Padmanabhan who has started this season on a satisfying note leading in winners on all the three days struck through Mrs Thatcher in the opening event, the BARI Plate. Perfectgoldenera from trainer M R Singh’s yard was fancied most, but despite T S Jodha packing punch the M R Singh ward lost out, a `neck’ separating him from Mrs Thatcher piloted by Mark. The winning jockey later steered home the rankoutsider Sovereign Legend to an impressive victory in the Master Key Plate run over a mile. It was Sovereign Legend’s stablemate Drusilla from Padmanabhan’s yard, who garnered the maximum support at the tote counters in the morning, but all that the favourite could do was to watch stablemate cruise home while she finished a tame third behind Arabian Mist.