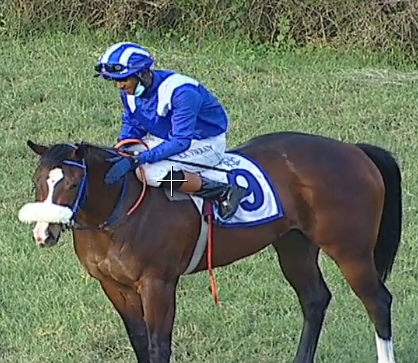 Born To Be (A A Vikrant Up), winner of The Dodla Pratap Chander Reddy Memorial Million

The Hyderabad racecourse came alive after what seemed a never ending wait. The HRC authorities had gone into the top gear in preparing for the races and were battle ready to get things going the moment the paper work with the Government was done with. The return of action on the turf brought a lot of relief along with cheer to the entire racing fraternity right from the top notch players down to the ground workers alike.

Ace jockey Suraj Narredu and an equine rising star named Ashwa Bravo (Leitir Mor – Shadow) walked away with the opening day honours. In fact, Suraj started the season on a winning note with a fluent win in the Race No 1 of the season.

The feature race of the opening day was the Dodla Pratap Chander Reddy Memorial Million for maiden two-year-olds. Among the eleven debutantes Ashwa Jauhar was the prime fancy. He was of to a good start and led them all the way well into the homestretch. Born To Be was tracking the leader right from the start took her time to find her rhythm and gain momentum. Ashwa Jauhar looked good approaching the distance post, but when he was challenged strongly inside the final furlong, he surrendered his lead meekly, which was disappointing and an anti-climax. Born To Be finished with a blazing run and drew away to score an emphatic victory. Akido improved in the straight and added further damage to Ashwa Jauhar to snatch away the second spot.

Assigned to ride Brilliant View (Tazahum – Royal Glory) for trainer Laxman Singh, jockey Suraj Narredu had to first come off an outside draw and in doing so found himself in the mid-field as El Mira hit the front and led them into the straight.

El Mira buckled out as Four One Four pounced on her soon after and started to shape well. Brilliant View soon started to wriggle free and once the filly got the clear run, she started gaining on Four One Four approaching the distance post. Not one to go down easily, Four One Four fought all the way and although Brilliant View was travelling better, she was made to earn her victory. Suraj rode out aggressively and guided Brilliant View past Four One Four under the shadow of the winning post clinching a thrilling win close home.

Suraj then achieved his second success a top Hidden Hope (Excellent Art – Heirless) from Laxman Singh’s yard and had a close rival in Good Connection. Here again Suraj had to dig deep as Hidden Hope settled in the third spot and got under pressure soon on turning for home.

Royal Romance had a handy lead past the 400m and just when Hidden Hope started to accelerate, the colt started to drift out. Guest Connection, meanwhile, was right behind and had to quickly shift lanes to between Royal Romance and the drifting Hidden Hope. Trevor did so in the nick of time and got alongside the front runners. Suraj used the whip deftly to correct course and after another gripping battle managed to stay ahead at the wire to carve out as well fought victory for Hidden Hope. Guest Connection missed out but was a gallant runner up. Angel Tesoro caught the eye among the beaten brigade to finish in the money.

Ashwa Bravo stole the limelight and was the most impressive winner of the day. He also brought up his third win making it a clean, three wins from three starts. He was on cruise mode all through and finished on on a canter without having to break sweat. Settling in third, Suraj didn’t mind going wide at the turn as leader Mind Reader skirted around the bend taking Egyptian Price along. Ashwa Bravo soon zipped ahead on tight reins and ambled far ahead of the rest within strides, posting an easy win by a street. Ashwa Bravo promises of bigger things to come his way with this facile victory. British Empress who was languishing in the rear, stuck to the rails and came through the shortest way; she progressed well in the straight to claim the runner-up berth beating Mind Reader to third.

LVR Deshmukh trained Lombardy (Leitir Mor – Lombardia) had been impressive in her opening campaign when she produced back-to-back wins on her first two starts. She did well in the Poonawalla Breeders’ Multi-Million (Gr I) at Mumbai as well, while finishing third among the topmost juveniles in he country. She kept her promise and produced a winning reappearance to remain unbeaten on the Hyderabad track.

Galloping Gangster shot into the lead and opened up a five length gap much before they turned for home. Lombardy was in third taking the turn and Trevor soon started to egg her one. Galloping Gangster held fort as long as he could, providing a bit of excitement but Lombardy ensured it didn’t last too long as she swooped upon him in the final furlong to take charge and win stretching away. Galloping Gangster would certainly benefit from his good run and will live to fight another day. Premier Action made some headway in the straight to finish third.

Sitara (Arazan – Flaming Glory) from the stables of RH Sequeira, outpaced Rapid Fire for the early lead and then raced away to pull off a neat start to finish victory. Jockey Akshay Kumar opened his account with his second ride with Sitara in the second race. He had Rapid Fire on his tail all the way but in the final furlong, Sitara sustained her momentum a lot better than Rapid Fire and the latter ran on to finish a rather tame second. Sitara galloped strongly right through the homestretch and Askhay too was relentless until they were past the post to score a decisive victory. Blazer improved in the straight to finish in the money.

Sreekant ward Strategist lived up to the expectations to score a comfortable victory taking his win tally to four out of eight starts.  It didn’t appear to be as comfortable win as it eventually panned out as Strategist had to contend with a few battlers in the field. Best In Show showed determination after leading them in and fought hard to keep her lead until the last few strides. Strategist came into the picture past the 400m and was gaining ground with each stride in the hands of jockey Irvan Singh. Strategist finished on with a powerful burst and none could match up to his final assault. Dunkirk came along well towards the end to end a notable second, just ahead of Best in Show.

Trainer Ananth Vatsalya picked up the concluding race of the day with his colt Xfinity (Sussex – Rising ide) scoring a fine debut win. He took a good jump and showed alacrity while dashing ahead to lead the fiend within the first furlong. Apprentice jockey Afroz Khan rode a competitive race as he was well in control on entering the straight. Amyra chased the winner all the way. Xfinity did veer out slightly in the final furlong, but he was well ahead and had a good momentum going to see it through past the post, winning with a decent margin. Amyra held on to the second place, while Unstoppable laboured on to take the third spot.